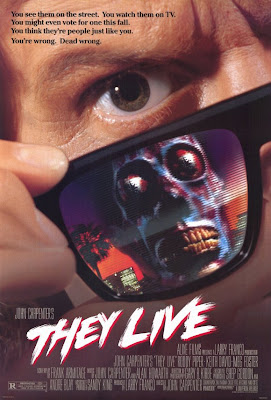 This movie is so far ahead of it's time. Back in 1988, I just don't think the average movie-goer knew how to take it, much like Carpenters previous effort from 2 years before Big Trouble in Little China. For 1988, I can understand. The concept is pretty far out there, but looking back on it today, it's such a product of it's time.
The plot goes like this. Wrestling legend Roddy Piper plays a no-named (he's never given a name in the entire film) drifter who's looking for work. He finds a job in construction and befriends a co-worker named Frank, played by the awesome Keith David. Frank takes the drifter to a place for homeless people where they can get a bite to eat and a place to stay. Immediately the drifter starts noticing strange things going on. You see, he's a watcher and a man of few words. He's constantly noticing things and seeing all kinds of things in the background. One being the strange goings on at the local church, soon realizing it's not even a church at all but a front for something, he doesn't know what. Also whenever anyone is watching a television set, there always seems to be an interference, like a weak signal coming from somewhere else and trying to break into every channel it can. During these interference's you see an older guy reading from a text spewing propaganda about how "they" are trying to control the planet and everything you do. It's pretty interesting stuff with a lot of what you think is political jargon. This group of people who run the homeless center are up to something. The drifter stumbles upon a box of seemingly regular looking sunglasses manufactured by this group and takes a pair. Once he puts them on he notices something different. Everything is in black and white and when looking at certain people, they look like weird skinless aliens. Also, on everything with written words like billboards, newspapers and magazines, there are subliminal messages that can only be seen with the sunglasses like "conform", "submit to authority" or "obey" and such. All meant to control you subliminally. And that's when the movie really kicks into gear. The rest of the film deals with the drifter and his buddy Frank stumbling upon a race of aliens who are here on Earth to take over and have been hiding under our noses right in front of us. The drifter doesn't like the fact that they are here and intends to somehow deal with the problem any way he can. Like immediately after discovering this, he goes berserk and just starts killing as many of them as he can. He doesn't know why there here (they could be actually here to help for all he knows) but he doesn't give a shit and thinks the best thing to do is to just blow them all away. There aliens on our planet and he don't like it. 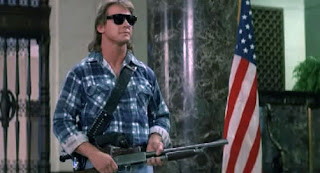 This is such an interesting movie. When you watch it now, it just seems so incredibly relevant in this day and age. When it came out in '88, it didn't have much love. But now, it's considered a certified cult classic and one of John Carpenter's most famous and most loved films. Which I think is funny because at the time of it's release, Carpenter used a pseudonym for the writing credits, calling himself Frank Armitage, which just so happens to be the name of Keith David's character in the movie. I don't know if it was because he was unhappy with the final product or even embarrassed and didn't want people to know that he in fact wrote the screenplay? I don't know. Whatever the reason, he certainly embraces the love now. It's one of those classic films that's closely associated with his name. And it's a fun film. It's an action film, a thriller, a sci-fi film, a horror film and a propaganda film all rolled into one. It's one of those rare films that works in either of these genre's. It starts off a little slow, showing the drifter rolling into town and looking for work, but Carpenters visual flair and keen camera work keeps the pace rolling nicely. As with most of his films, he did the musical score here. It's got a jazzy, slow-tempo vibe that even when nothing is really happening, you enjoy listening to the beat of the score because it keeps things consistent.
I have to say, Roddy Piper surprised the hell out of me in this, even going way back to 1988 when I first saw this, I think I must have been 12. But even then, I thought this guy had presence. I used to watch wrestling back in the 80's, back when it was cool. Hulk Hogan, Andre the Giant, Captain Lou Albano, The Sheike and Rowdy Roddy Piper. In the ring, this guy was crazy nuts. Always wore that kilt and always screaming his head off. But shockingly here, he plays the drifter calm and cool throughout. And when the time comes to chew bubble gum or kick some ass, he does it with such ease. I'm really surprised that he didn't have a bigger acting career. Just this movie alone should have been enough to show anybody that he does in fact possess the chops to do it. After this I thought the guy was going to blow up big time. He didn't, and I don't know if that was a personal choice or what. Keith David is also pretty awesome in this, as he is in anything he does. Carpenter had previously worked with him in my all time favorite horror movie, The Thing. This film also has the longest bare knuckled fist fight ever in film history, and it's pretty brutal and hilarious at the same time. Piper's character is trying to convince Frank of what is really going on by asking him to put the sunglasses on. Frank refuses because he thinks he's nuts and dangerous and a fight ensues. All for the sole purpose of making Frank wear those damn sunglasses so he can see for himself. They kick each other's asses so brutally and the drifter just keeps screaming "Put the glasses on!!" over and over again. You start to think, how horrible would it be to put a pair of sunglasses on? Whats wrong with this Frank guy? There is actually a whole "legend" behind this fight, with lots of different stories and theories. They say that the fight was supposed to be a lot shorter, but that Piper and David actually started to get aggravated and fight for real so Carpenter just kept filming. I find this hard to believe as there are camera's set up all over the place for specific shots and landings and punches and whatnot and unless they had a guy with a handheld camera filming everything, it would have just been impossible to not get the crew, or other cameras in the shot. It's a beautifully choreographed sequence and in the end you can't help but laugh out loud as these two guys beat the living shit out of each other over a pair of sunglasses. Just in case you were wondering, yes, he does put the glasses on.
This movie also has some of the most hilarious catch phrases. The main one being when the drifter walks into a bank with a shotgun and those sunglasses and says "I have come here to chew bubble gum and kick ass, and I'm all out of bubble gum.". Classic! That line was actually ad-libbed by Piper himself. This film is full of them and you can quote them for days. 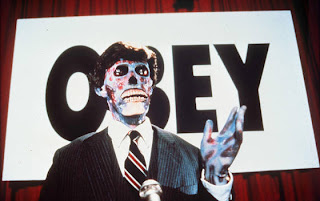 This film is so full of surreal images that have been burned into our subconscious. There's a scene where the drifter, after first putting the sunglasses on and he's walking around the city in awe and confusion, walks into a grocery store that has a television playing. On the television is a figure, one of the aliens because he is wearing those special sunglasses at this time, who's preaching propaganda from a podium. He's wearing a suit, but still looks like one of the aliens and behind him is a large sign with the words "OBEY" in big black letters against a white background. Even though this scene lasts no more than 3 seconds, it is this scene that this film is most rembered for. It's such an iconic scene because it represents what the entire film is about.
The budget for this film is very tame, even for 1980's standards. Maybe that's why towards the end of the movie when the drifter and Frank are infiltrating the aliens headquarters, the guards are using some kind of communication device to talk to each other. If you look closely, they are actually P.K.E. meters, the same one that Egon uses in Ghostbusters. But still, despite the budget being relatively small, it doesn't look cheap at all. Carpenter knows how to shoot a film whether it's a big budget film or low budget film. Costing $4 million to make it ultimately made $13 million at the box office. Technically not a lot for a sci-fi action flick, but 3 times it's budget, which makes it a hit.......technically, if your going by figures alone.
This film is by now 23 years old, and I for one am so glad they never tried to remake this one. It deserves to be left alone. It's remembered fondly by all of us geeks for all the reasons that the critics feel that it failed. I'm still waiting and hoping that one day we'll get this sucker on blu-ray with a feast of extra features. Wouldn't that be something?
This came out during a period in John Carpenters career that he is most remembered for. The Fog, Escape from New York, The Thing, Christine, Starman, Big Trouble in Little China, The Prince of Darkness and They Live all coming out back to back and permanently cementing his status as a true movie god in our hearts, mine especially. Four of these films are on my all-time favorites list. So I love John Carpenter films, even going back to Assault on Precinct 13, one of the most brutal and unflinching action flicks I've ever seen and a personal favorite. He has a specific style and a specific take on horror and action. It's safe to say that nobody makes a film like John Carpenter can. A lot of these movies listed here in his filmography unfortunately have not gotten much praise from the critics, except Starman, but we love them anyway because he makes movies his own way. During this time in the 80's, nobody was making them as consistently as him. He was a maverick in his prime and though he's fallen off the map because of unbelievable misfires like 1996's Escape from L.A. (a film that literally hurts to watch) and even 2001's Ghosts of Mars, he's been forgiven for his sins and has finally made his first big budget film in 10 years with The Ward which so far has gotten lots of praise.
Though overlooked from his filmography for many years, even decades, it's finally been considered an iconic piece of sci-fi filmmaking and one that deserves another viewing and a proper blu-ray release.
Posted by robotGEEK at 2:35 PM