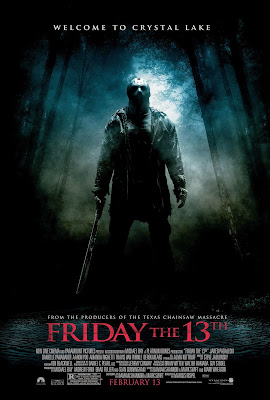 I have to admit, I enjoyed this one a hell of a lot more than I thought I would. I purposely held off on watching it these past 2 years because I just didn't think it looked very good from the trailers. I love a good horror movie, but even this didn't get me excited enough to shell out $8.50 to go see it at the cineplex, especially coming out during a time when it was endless remake after endless remake. Some should never have been touched, rebooted or remade (A Nightmare on Elm Street specifically), but this was a nice surprise.
Directed by former music video and commercial director Marcus Nispel, apparently the go-to guy for remakes these days after remaking The Texas Chainsaw Massacre, Firday the 13th and the soon to be released Conan, it's surprisingly entertaining with lots of kills, gratuitous nudity and a fair amount of nail-biting moments; all the ingredients for a decent horror flick.

I'm not going to go into the backstory of Jason as after 30 years since the original, we all know what the story is about. I was surprised though that in this one, they decided to forgo the entire Jason history and events that led up to why and how he or it (depending on how you view him) becomes what he or it ultimately becomes. It goes right into present day where he's the age, size and unstoppable killing force from his previous films, mainly from Part 3 on, because that's the sequal where he gets his trademark hockey mask. Instead, we get a 2 minute ( I guess you can call it a flashback ) sequence where were shown a teenage girl trying to defend herself from Jason's evil mother as she spouts blame for not watching her son and saying it's there fault and all that. She, like in the original, cuts Jason's mother's head off and we see a young Jason (apparently still alive) watching this unfold from the woods. And that's the first 2 minutes of the film. We have to assume it's a flashback because Jason is young, in case you couldn't figure it out. After that were immediately thrown into the present day where, wait for it............................a bunch of young adults decide to go camping on Camp Crystal Lake and have lots of sex and drink lots of alcohol. Can you believe it? For a Friday the 13th movie?! During this sequence while there all around a camp fire naturally, one of the young adults happens to know the story and history of Crystal Lake and tells the story about a young boy named Jason who drowned and his mother went insane killing everybody she thought were responsible for her sons death. That's basically how were given the information on Jason's entire history up until this point. And they all die by the way, because it is of course a Friday the 13th film.
That's of course, just the first sequence. After these events another group of young adults head out to a fancy shmancy log cabin by the lake not far from what just happened that belongs to a schmuck named Trent for a weekend of partying. Right away you get that this guy is rich, he's an asshole and he only invited everyone up to his fancy cabin to show off. In the meantime this guy named Clay rolls into town on a motorcycle at the same time passing out flyers of a missing girl, his sister. We learn later that the missing sister is one of the girls from the beginning of the film who went camping on the lake a few weeks before and disappeared. Clay immediately butts heads with Trent, the asshole, and what ensues is more sex, more drinking, lots of smoking, Jason killing lots of people and Clay looking for his sister. I should also mention that he doesn't have the hockey mask for the first quarter of the movie. He finds it during one of his kills later on, which kind of in a weird way blends the first 3 films from the original series into one as he wears both the burlap sack and the hockey mask in this one.

Spoiler Alert:
You end up finding out that Jason has Clay's missing sister being held prisoner in his underground bunker. That just doesn't make any sense to me. Why in the world after all these years of killing people would he decide to hold this one girl prisoner after killing all of her friends? Certainly not for sexual satisfaction or anything like that. He has no emotions and he doesn't feel. He just kills and kills relentlessly if anyone comes near Camp Crystal Lake. So why does he hold this girl hostage? You got me because it's never given an explanation. Again, that just makes no sense to me. When has he ever in the history of Friday the 13th films held one of these drunken oversexed teenagers hostage? Or even have the mental capacity to do so? I suppose the writers needed a reason to have one of the characters looking for something with a possible good outcome to keep the story moving along. I don't know.

What I also find odd is that if this cabin belongs to this guy Trent's family, why is this the first time they've ever had to deal with the threat of Jason if he's been living in the woods in that area for decades apparently? And you have to assume they've owned this cabin for a while as it's a fully furnished house basically complete with a boat and a shed itself the size of a house. I'm just sayin'.

Director Marcus Nispel did a pretty bang up job here. And I have to admit, I was a little worried after seeing his previous effort Pathfinder. Cool look and concept, but his camera work drove me nuts. Keep the fucking camera still for 2 seconds!! Though he touched on that a little in his film before that, The Texas Chainsaw Massacre (remake), it wasn't as bad as in Pathfinder. But i'm happy to report he refrains from this style of camera work here and actually mounts the camera for most of the movie, which is a nice change these days. And he makes it look good too. It's never boring, unlike A Nightmare on Elm Street (remake), with plenty of suspense and a few edge-of-your-seat thrills. I did wish though that they would have come up with more interesting kills, because ultimately that's why we go to see these Jason movies. Yea, there were a lot of them. But they were mostly stabbings or impalings. I would have like to have seen more dismemberment's, gushing blood, limbs being torn or cut off or even a disembowelment or two. I wish they had just gotten a little more creative with the kills, speaking as a true horror fan. One thing I gotta say is that I like the way they did Jason here. The guy who plays Jason, Derek Mears, is a hulk, i'm talking huge. I'll always be partial to Kane Hodder's portrayal of Jason from parts 7 through 9, but this guy here is pretty badass too.

As far as effects go, there top notch and as realistic looking as you can get looking like they used real practical effects a la Tom Savini's amazing work from the original and especially Part 4: The Final Chapter, one of my fav's from the series. If it was digital here in this remake, I couldn't tell.

I really hope they keep the series going and get different directors for every single one like they did in the 80's. Having a unique vision from different directors can keep this series alive for years if they can figure out how to make them cheap.
Posted by robotGEEK at 9:24 AM