Review: I Saw the Devil 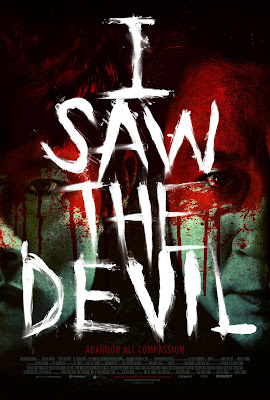 Right from the opening sequence, this film grabbed me by the throat and preceded to assault my senses for the next 142 minutes. Brutal. Just incredibly brutal from beginning to end and another top notch product of Korea after the incredible The Man From Nowhere. I can't remember the last time i'd seen a film this disturbing, this violent, this graphic and this intense in a long time.

Director Ji-Woon Kim has masterfully crafted one of the most intense psychological thrillers I've ever seen, and without a doubt one of the most violent. I'm telling you, every time I thought the violence couldn't get anymore graphic, they up the ante by a mile. And it has a different effect than when watching something like say, Ichi the Killer. Yea, that movie is just as violent, bloody and gory if not more, but its an action/yakuza flick with the violence being so over the top it ends up being cartoony and you just can't take it seriously. Here, it has much more of an impact and often leaves you uneasy. It's as realistic and unflinching as it could possibly get, and if you don't have a strong stomach, you probably couldn't handle a lot of this. But I loved every second of it.
As I was watching this all I could think of was how this film would never play in a U.S. theater without getting an X Rating, even if the violence was cut significantly. This is not an action film, which if it were it could get away with a lot of the violence. Rather this is an intense character study of revenge........no guns, no fights. It begs the question, how far would you go to exact revenge on the person who brutally killed someone you love and how much would be enough?

Byun-hun Lee, again reteaming with director Ji-Woon Kim after The Good, the Bad, the Weird, plays secret service agent Kim Soo-hyeon. His fiance is murdered by a sadistic serial killer right from the incredibly unsettling opening sequence. He is so distraught that he promises to exact the same pain and torture to whoever did this. After narrowing down the list of potential suspects, thanks to the help of his would-be father in law who is the chief of police, he zeros in on Kyung-chul, played by the magnificent Min-sik Choi of Oldboy. Looking a lot older and a lot heavier since Oldboy, Min-sik Choi plays the serial killer here with such ferocity and ambivalence that he's genuinely scary as hell. Kim finds the killer, but doesn't kill him. He beats the living daylights out of him, a mere inch of his life, and implants a tracking device down his throat and lets him go so he can hunt him. When Kyung-chul awakens, he's at a loss for words as to why he was beaten so severely, but left to live? Immediately after escaping, he starts killing again relentlessly in one of the most brutal and bloody sequences in the entire film. It takes place in a taxi cab and it was simply ferocious and bloody as hell. He soon realizes that this guy who beat him so severely is following him, always happening to stop his next kill, and toying with him. These scenes where Kim Soo-hyeon finds, tortures and again leaves Kyung-chul alive are incredibly graphic. He's got a plan, to exact slow and painful revenge on the man who killed his fiance with each time being more painful, more brutal and more merciless than before. These scenes left my jaw dropped to the floor every time. For someone who enjoys a good horror movie and good use of blood and gore, it left me kind of squeamish throughout. Whats amusing is that even though the serial killer is being repeatedly tortured to the point of near death, it doesn't faze him. He gets up, laughs it off and proceeds to seek out his next victim, always uttering "That crazy bastard!"(referring to the protagonist) under his breath. This guy is nuts and certifiably insane. He soon realizes who this guy is though, and what begins about half way through the film is a game of cat and mouse between the two. Because though he finds it amusing, he's also getting pissed off because he's disturbing his work, his killing. The scenes of torture bestowed upon Kyung-chul, the serial killer, are incredibly unsettling. Repeatedly victimized, you start to wonder, how can this guy live after that? But he does, and lives to take another beating.
What we also see happening is the protagonist, who in the beginning of the film is a well respected secret service agent, slowly starts becoming the monster he is chasing. And that's what's at the heart of the film, showing you how far a man will go to exact revenge, not realizing he is becoming a monster himself. These two men, who in the beginning couldn't be more different, slowly become more alike than they realize. He doesn't eat, he doesn't sleep and will not stop until he's finished exacting unflinching horror on this guy and your often left wondering when will enough be enough? You start asking yourself, what makes him any different than the killer? Because in the beginning there's a good guy and a bad guy. By the end, you don't know who's side to be on.

Min-sik Choi, who was amazing in Oldboy, outdoes himself here. His performance should go down in history along side Anthony Hopkins performance as Hannibal Lecter in Silence of the Lambs, another serial killer, as truly incredible. Director Ji-Woon Kim has also crafted an exceptional thriller with precision camera work. Though I felt it went on a little too long, about 2 1/2 hours, you never really feel it because it's incredibly engaging throughout. It's exciting, thrilling, horrifying, brutal, graphic and intense from beginning to end with every set piece and sequence leaving you floored in awe. Be warned, this film is incredibly brutal and graphic and it's definitely not for the squeamish, but if you can stomach the excessive gore and violence it's an experience you won't soon forget.
Posted by robotGEEK at 6:42 PM