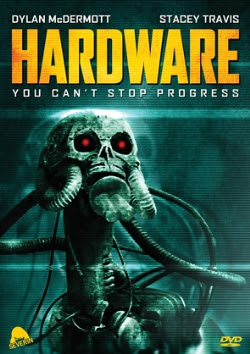 Directed by: Richard Stanley
Category: Cult Classic
I love this movie!
This is a "cult classic" by every meaning of the term.
I remember seeing this way back in the early 90's after reading about it extensively on Fangoria Magazine, a magazine me and my brother were obsessed with back in the day.
I remember it being difficult to find as most video stores didn't carry it, especially not in my crappy town. And remember, this was before we had the internet in every single home. So thankfully I had my Fangoria magazine to tell me all about it. How it hails from the U.K.. How it received an X Rating from the MPAA. How it was a Sci-Fi Post Apocalyptic tale directed by a first time helmer of music videos. For me though, just knowing it received an X rating for gore was enough to get me excited about it.
Looking back though, I can't remember too much about it. I remember that I dug it quite a bit, but there wasn't anything that really stood out to make it memorable. And apparently none of my friends or acquaintances never knew it even existed, which is a damn shame. I remember it was low-budget. I remember it had a cool gritty look to it. The soundtrack was pretty badass. And the gore was pretty decent and plentiful. Not realizing though that some 20 years later we would be getting another chance to see it. And this time in all of it's "UNRATED" glory. So what I was watching way back when was the severely edited "Theatrical R-rated" version minus a lot of the extreme violence. But also, I believe I was about 16 or so when I saw this, so pretty immature to have any real kind of opinion on it.
And if I remember correctly, this was never before available on DVD until 2009 when it was released on a beautiful  Hardware (Two Disc Limited Edition)

. Believe me, I tried tirelessly to track this sucker down for a good 10 years before this special edition DVD came out almost 20 years later. All you could ever get was a VHS version, which doesn't do the film justice especially when you can't watch it in widescreen, or a burned copy off the internet supposedly of the uncut version. But you never really knew what you were getting or where the source material came from.
So let me just go into it. This movie kicks all kinds of ass! It's gritty, bloody as hell and entertaining enough to keep you interested throughout for a low-budget movie, and thats a rarity. Watching this again was like watching a whole new movie. I didn't remember much to begin with, but watching this in all it's uncut awesomeness added that final touch to a great moviegoing experience. And it's surprisingly suspenseful, especially in it's final act, with its screeching score only adding to the experience.
It centers around a post apocalyptic scavenger played by "The Practice's" Dylan McDermott, who finds a robots head and brings it to his artist/sculptor girlfriend to use in one of her pieces. What they don't know is that the robot head contains the brain of the M.A.R.K. 13, the military’s most ferocious bio-mechanical combat droid. Somehow, I don't remember how exactly, it awakens and starts to rebuild itself with spare parts and scraps laying around the girlfriends studio and becomes an unstoppable killing machine.
Now this movie is low-budget and you feel it throughout the whole movie. I suppose thats why it feels so claustrophobic, mainly shooting in interiors and except for the opening sequence, never really venturing outside or showing the post apocalyptic wasteland teased to us in the beginning, and that's unfortunate.
Director Richard Stanley, here making his feature directorial debut, really needs to grow. This kind of movie seems like it should be someones 2nd or 3rd directorial effort. It just seems too ambitious for an inexperienced film-maker and you can definately see that. Lack of budget and an inexperienced director prevents this film from really becoming something pretty incredible and you can't help but feel as you watch this that had it been given to someone with more films under there belt, it could truly shine as a sci-fi film. But those are the only real complaints I have. Because despite all that, it's a pretty badass flick. I'll give the guy props though, because despite his lack of a budget, he pulled off some pretty impressive sequences and f/x shots. And the gore is fantastic and plentiful. Often leaving me yelling outloud "Holy Shit"! Niiiiiiice!! And being the early 90's, this is way before CGI, so it's all practical effects. Nowadays, even in the direct to DVD market, its just easier and cheaper to go digital for even the most basic effects and to me just always seems like a copout. It looks bad, especially in the low-budget fair, and to me lessens the impact a scene could have when you know what your watching isn't really there using prosthetics or squibs. What happened to the days when you couldn't make a movie without Stan Winston, Tom Savini or Rick Baker?! So sad, I miss those days.
This movie is a rare gem that emerged from the home video market in the late 80's and early 90's. It's budget constraints seemed to help the film-makers become a little more innovative in there techniques, saving this film from becoming another long lost and forgotten "attempt" at sci-fi. It's not a perfect movie and has it's share of problems; mainly camera work, some wooden acting, money, but when looked at as a whole, those things can easily be overlooked. You can almost call this an "arthouse" film. It was meant for a theatrical release, but never really found it's audience. That, on top of it being severely cut down to avoid that dreadful X Rating pretty much destined this film for cult status glory. Yea, it took about 20 years, but it's better late than never.
Posted by robotGEEK at 12:53 PM