A Look Back at Roland Emmerich's Godzilla (1998) Over 20 Years Later, Godzilla 1998 Proves To Be One Of The Best Giant Monster Epic's Ever Made

This take on Godzilla is such a fascinating one. Intended to kickstart a whole new franchise of Godzilla films, it was met with mostly negative reception, and while it was ultimately a very minor hit, making more money than any Godzilla film before then, it wasn't enough to keep making more. In fact it would be another 16 years before Hollywood gave it another go with Gareth Edwards slightly better received version in 2014. That's not to say that this film isn't any good in it's own right or that it's the disaster that it's reputation leads you to believe. Because honestly, Godzilla 1998 is one helluva fun ride. Let's begin.

Writer/Director Roland Emmerich (along with his partner Dean Devlin), were riding high on some big budget hits with Universal Soldier, Stargate and the mega-hit Independence Day when they were contacted to try and revive the Godzilla franchise. I mean, who better than this hit-making team who proved they could make big special effects-laden hits on a relatively modest budget? When you think about it, their 3 previous films all turned into highly successful franchises spawning sequels, television series, toys and entertainment memorabilia. Mixing old school practical effects and model work with new state of the art CGI (at the time), they were proving themselves big players in the sci-fi, epic, disaster, and action genre's with glowing results. While initially given a book full of "do's and don't's" from Godzilla's parent company Toho, Emmerich ultimately seemed to disregard most of them and came up with his own version, which not surprisingly, didn't sit too well with die hard Godzilla fans. This time around Godzilla looked like a giant lizard that walked like a T-Rex, and honestly to this day that is really the biggest gripe anyone has regarding this film. And I get it. I was the exact same way. I HATED the way Godzilla looked so much that I let it define my overall feelings towards the film as a whole.

But guess what? Time has been extremely kind to this film. Sure I'm still not a fan of the whole lizard look, but I'd be damned if it isn't one helluva fun epic giant monster film. If you can look past his design, you'll find that as said giant monster film, Godzilla 1998 has so much to offer in the form of epic entertainment. Flawed, absolutely, but it's also made exceptionally well in the way only Emmerich and Devlin could produce. You have to remember they were at the peak of their talents around this time, and it's all due to their talents of creating fun films, utilizing outstanding effects work and a strong and consistent visual pallate that few filmmakers were and are capable of producing.

Roland Emmerich has always been a strong visual filmmaker, and I don't feel he gets the credit he deserves for infusing so much style into his films. If you look back at some of his biggest hits, they all carry a gorgeous aesthetic that utilizes it's widescreen frame to enormous effect. While entertaining, they're also beautiful films to look at. I feel Universal Soldier in particular is a prime example of this. As much as it is a badass 90's action/sci-fi masterpiece, it's one damn good looking film too.

With Godzilla, they decided to go BIG. Big in the sense of scale in that they have Godzilla destroy New York City, the most famous city in the world. Logistically, shooting in NY is such a gargantuan task, but destroying it is an even bigger one, and they make it look so damn easy. And that's one of Emmerich and Devlin's greatest strengths. They make it all look so easy when in reality, it's a nightmare. The sequences where armed helicopters are zig zagging through NYC high rises while chasing Godzilla (at night....in the rain!) is so well done utilizing a surprisingly large amount of old fashioned model work and stunts is so goddamn impressive that I'm shocked it doesn't get more attention for just how incredibly effective they pulled it off. 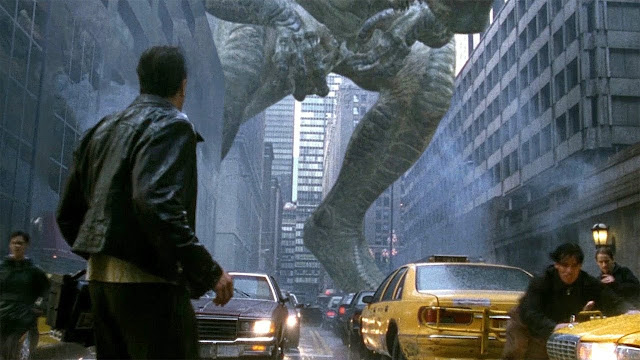 While I feel some parts of it are a bit ridiculous, like the fact that he can hide underneath New York City by moving around through the sewer system (come on!), and how the third act basically turns into a Jurassic Park sequel, I have to say that that first 45 minutes is pure gold and some of the best exposition I've ever seen leading up to a big reveal. The film as a whole is just great fun, but that first act is just incredible.

If you can look past his unpopular design (thanks to Patrick Tatopoulos), and maybe think of it as just a big epic giant monster film, you will find that actually really fun, extremely well-made, and so ambitious that it's almost exhausting. Everything you love about Roland Emmerich as a director is on full display here, from his impeccable camerawork, how he utilizes every inch of the widescreen format, and just with it's overall fun tone, Godzilla might actually be a better film than you remember. In fact, it's pretty great. 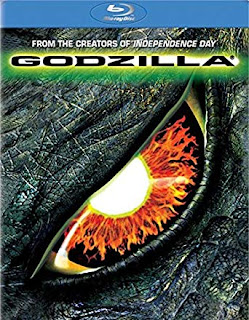 Fun Fact:
Writer and Producer Dean Devlin has stated that upon it's original theatrical release, the film's less than stellar digital effects were not fully completed to their satisfaction. But because of time restraints, they had to release it "as is". He says that the only version available with the updated and completed digital effects is on the Blu Ray release. Per IMDB: The movie's intended look was not revealed to the public until the Blu-ray release in 2009. All previous versions contained a serious technical issue which lead to the computer generated graphics appearing sub-par. Dean Devlin explained that this was the result of the type of film tape they had wanted to print the movie onto being inaccessible at the time of its release. Thus, the movie was printed onto a different type of tape and shipped to cinemas with unfinished-looking effects. This was one of the reasons behind the movie's failure, as the effects did not live up to the hype. They were finally corrected digitally for the Blu-ray.
Posted by robotGEEK at 12:23 PM