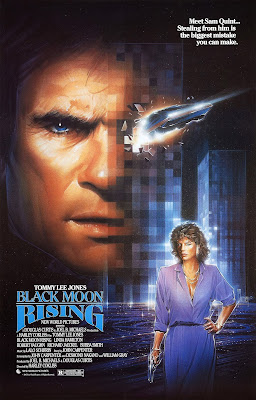 I'll be honest, as much as I want to love this film, I just could never get quite into it as much as others have. While it's got some good things going for it, I always feel like it's severely lacking in some other areas. But those are just my bones to pick and despite my personal feelings, I do realize this is still considered a cult classic, as it should. There's a lot to like here.

Co-written by none other than John Carpenter, Black Moon Rising tells the story of a thief working for the government, who gets caught in the middle of car theft ring involving a beautiful car thief (Linda Hamilton), a ruthless crime boss (Robert Vaughn), and a state of the art car the world has never seen.

It basically plays out like a Cat & Mouse thriller as everyone seems to be playing everyone else, but the film is shot well - courtesy of director Harley Cokeliss (Malone) - with a cool 80's thriller aesthetic, Tommy Lee Jones actually looks like he's trying (remember those days??), and that car, even though it doesn't have nearly as much screen time as you hope, is one helluva killer vehicle.

The score carries a cool 80's synth vibe from time to time, and despite my grumblings, it's certainly enjoyable, especially anytime that car makes an appearance. I threw it on as background noise the other day while working from home and I have to admit that I enjoyed it much more this time around than before. Maybe my issues initially were that I was expecting too much, whereas this time around I already knew exactly how it would play out? In any case, it's yours to stream right now, so give it a shot.

Black Moon Rising is currently streaming on Amazon Prime.
Posted by robotGEEK at 9:32 AM