A 1987 Animated Series and Toyline That Failed to Capture an Audience, Yet Lives on in Cult Infamy

These last few months I've really dug deep into collecting vintage toys again. But not just any toy, primarily the toys from my childhood in the mid 80's. It's something I come and go with from time to time - a hobby that brings back the kid in me. So much so that I probably need to take a step back for a little while. But when I get in these nostalgic moods, I also begin revisiting old 80's cartoons. And in case you didn't already know, TubiTV is an excellent source for free vintage cartoons, as well as a shit ton of movies and tv shows. One day as I was watching the first season of Transformers, this show was suggested as one I might like based on watching that. Boy were they right.

I had never heard of Starcom, or as it's officially known as Starcom: The U.S. Space Force. I didn't even know it was also a toyline back in 1987, the year this series aired. How did I miss this? No idea. But what I can tell you is that it is hands-down one of the best animated series I've ever seen. And not just from the 80's, but.....ever!

While it only lasted one brief season, with the toys not doing well either, it came and went with little fanfare, and somewhat forgotten by the general public. I mean, I was a HUGE cartoon, science fiction and toy nerd in 1987 ( I was 11 years old, and the perfect age to dig this), and somehow never knew this franchise existed. From what I learned, it did considerably better overseas and lasted a bit longer outside of the United States. I suppose it comes down to poor marketing for both the toyline and series, but still, how is it that nobody ever talks about this? 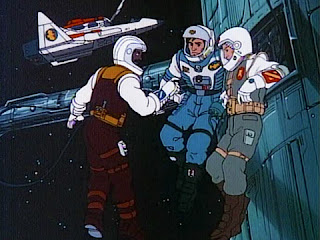 The first thing that grabbed me immediately was it's superior animation. It's impressive as hell, reminding me a lot of something that would have easily been featured in an issue of Heavy Metal, or better yet the cult classic animated film. It features stunning character and production design, with nonstop action and a more adult-oriented storyline that I found surprisingly mature, considering it was aimed primarily at kids to sell toys. And that's just a few of a large number of things that makes this series absolutely amazing. They don't dumb down anything, in the hopes of appealing to a younger audience. There's no silly comedy or humor like most cartoons from the 80's tried desperately to include (C.O.P.S.: Cops 'n Crooks by Hasbro is a painful example), and it makes it all the more immersive. And the action is so well done that the space fighter jet sequences are so much better than most animated films to have ever come out, much less a little known animated kids show from over 30 years ago. 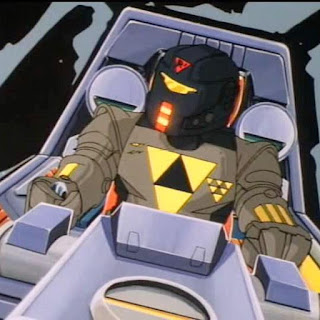 Starcom only lasted a single season of just 13 episodes, yet is a prime example of outstanding animation, story, character design and quality that NEEDS to be more recognized.

You can currently watch the entire season for free on TubiTV, but not sure how long it will be available on there. You can also purchase the complete series on DVD for less than $10, and trust me, that's a helluva bargain for quality this good.

To learn all about the history of this series and it's very brief toyline, check out this excellent video from the insanely talented Toy Galaxy. If you're not already following them on YouTube, follow and support them. Their videos on vintage shows and toys are a part of my every day routine.

Posted by robotGEEK at 9:37 AM