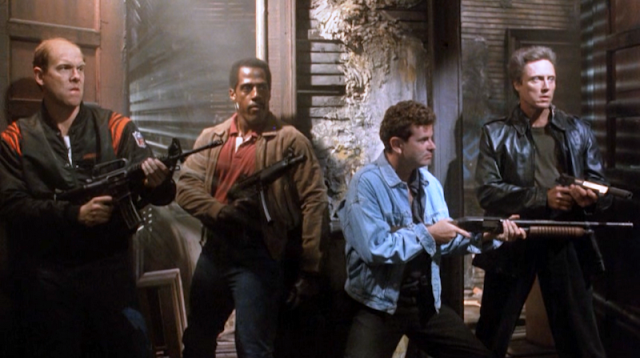 When I recently watched the James Glickenhaus classic Shakedown for the very first time (finally!), I immediately fell head over heels in love with his very special brand of action filmmaking. That led me to dig into his very short list of films he made as a director, which included Jackie Chan's The Protector (LOVE!!), the arthouse action/thriller The Soldier, and of course, Shakedown, hands-down one of the best action/thrillers to come out of the 80's. This amazing journey then led me to this, his first and only 90's full-on action/thriller. The funny thing is that I had always been aware of this film, even seeing it numerous times at the video store, but had no idea it was a James Glickenhaus film. But I guess I can say that about all of his films.

Released in 1991, McBain tells the story of Robert McBain, a vietnam vet working construction in New York who bands together with his old vietnam war buddies to take down a Colombian dictator who was responsible for the death of one of their former own.

I loved this one. Not only is it classic Glickenhaus all the way, the casting is especially special here. For starters, we have the legendary Steve James (American Ninja, Street Hunter), getting more screen time than we've been acustomed to as a supporting player, because more Steve James in any film is always a good thing, but we also have Michael Ironside, Maria Conchita Alonso and a roster of other notable character actors. And I  never would have figured Walken for this kind of role, but he handled it like a true badass and a pro. 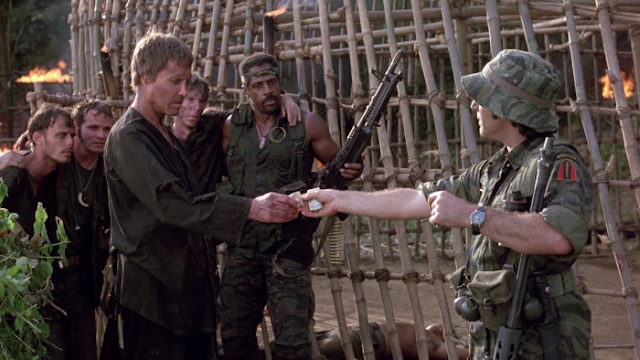 The film starts with a bang as we're thrown head-first into a rescue mission in Vietnam, and I must say, it was damn impressive in it's execution. Glickenhaus has a very specific way of directing and shooting action sequences, and he did not disappoint here. We're then transported to the present day New York City circa 1991, and then to Columbia where this group of men, now older, wiser and somewhat bored with their professional lives, attempt to exact revenge for the murder of their brother by taking down a ruthless dictator.

Whether shooting in the jungles of Columbia, the streets of New York, or even all the way over in Hong Kong, Glickenhaus just knows how to shoot an amazing action sequence. It's a shame that this would be his last hurrah in terms of action/thrillers, as the last few films he made after this were easily forgotten, and not within the action/thriller genre. But hey, at least we still have a strong handful of classics we can keep going back to.

While it sort of feels like a "rescue mission" type film, it's actually more of a revenge-style action film. Our group of seasoned soldiers are not going to rescue anyone, rather their purpose is to exact revenge for the televised murder of their 'Nam brother at the hands of a ruthless dictator. They're even able to secure help from a rogue air force pilot along the way after a pretty incredible dog fight battle sequence in the air. Once they arrive in Colombia, they must infiltrate El Presidente's compound with a full arsenal at their disposal, where all hell breaks loose. Needless to say, McBain did not disappoint. It's the kind of film that I was both not expecting, but also hoping for. It's a Class A production handled with gusto by a far too underrated director with a stellar cast. 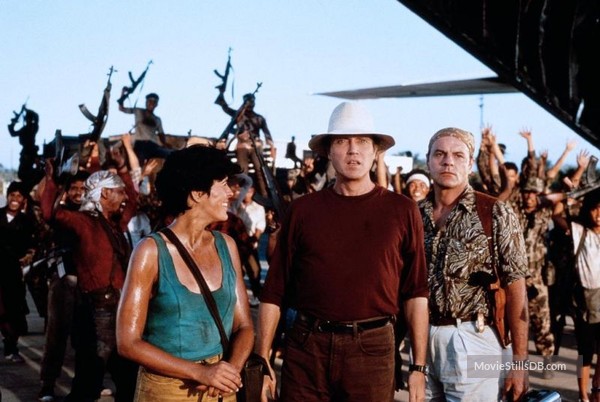 Glickenhaus only made 2 other films after this, the '93 thriller Slaughter of the Innocents, and the kids movie Timemaster released in '95, both of which haven't fared nearly as well as any of his previous films. He hasn't written or directed a film since then, and it's a damn shame. Yet I don't think he could even make a film like he did all those years ago, just because of how films are handled these days. It certainly wouldn't make it into theaters, and shooting films digitally rather than on film like in the old day's just takes so much away from the experience and general aesthetic of them......for me anyway. So maybe I should just appreciate the great classics that he's given us and stop thinking about the films he could have given us had he kept making them.

McBain is one helluva great action film, made all the better with it's stellar casting and Glickenhaus' very unique way of shooting. It's a bit under-the-radar, which is a shame that more people don't know about it compared to a few of his other films, but it's not any less entertaining. That I will guarantee. 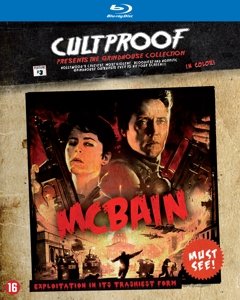 As far as I'm aware, it's only gotten a VHS and Laserdisc release here in the U.S., but I know it's been released on DVD and Blu Ray in other countries. The best one to get would be Cultproof's Region Free Blu Ray, which is roughly around $20. It's in widescreen, and the presentation and audio are pretty great. The only real issue is that it's lacking in any extra's, so all you get is the film and nothing else.

I've heard that there's an Arrow release either already out, or coming soon. So I'm sure that would be a great release to get your hands on. But there's some good news for those of you who like to stream. McBain is currently available on Amazon Prime in the U.S., but I can't vouch for it's quality or if it's even in widescreen, which is really the only way to see it to really get the scope of these large action set pieces.
Posted by robotGEEK at 11:35 AM