If you haven't already noticed, I've been on somewhat of a Steve James kick lately. I just love the guy, and have always felt he never got the chance to really shine the way he should have. Cannon Films really lost a great opportunity to let him lead the franchise after Michael Dudikoff bailed on the third American Ninja film, but they didn't. And whenever he would pop up randomly in something like Chuck Norris' Hero and the Terror, or William Friedkin's To Live and Die in L.A., he was always wasted. He really was a badass in every sense of the word and deserved much more respect than he got. He was always the "partner", and never the lead.

There were 2 instances where he did carry a film all on his own. The first was 1989's Riverbend, an impossible to find film directed by none other than Sam Firstenberg (Revenge of the Ninja, American Ninja, Breakin' 2), and then there's 1990's Street Hunter, Steve James' one and only screenwriting credit. And guess what? Street Hunter is also really hard to come by these days. Having only ever gotten a VHS release, there's no DVD or even a Laserdisc release that I'm aware of, making that VHS pretty scarce. 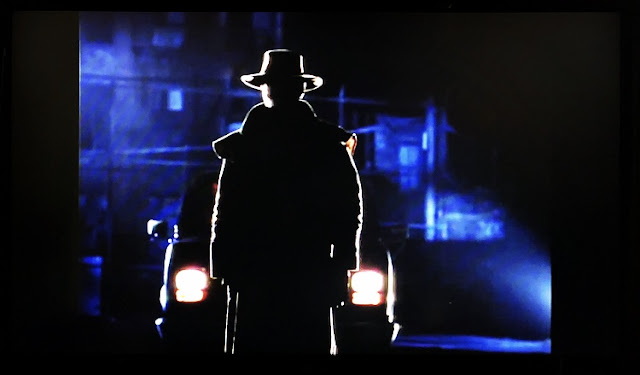 Steve James plays Logan Blade, an ex-cop turned bounty hunter who's somewhat of a hero in the community. When he's not busy busting bad guys or tracking down fugitives, he's doing what he can to help his community. When a young street gang leader named Angel (John Lequizamo) begins taking over the drug traffic in his city, Blade's life begins to turn upside down. And with the help of the ruthless Col. Walsh (Reb Brown) by Angel's side, Logan Blade might have finally met his match.

Released in 1990, Street Hunter is a hidden gem within the low-budget action genre. Steve James is finally given his moment to shine, and boy does he deliver. Having co-written the script himself, you see so much of him all over this thing. He's brutal when he has to be, but also kind, gentle and loving. The moments when we see him trying to have some sort of relationship with his girlfriend really show how charming and charismatic he can be without even trying. 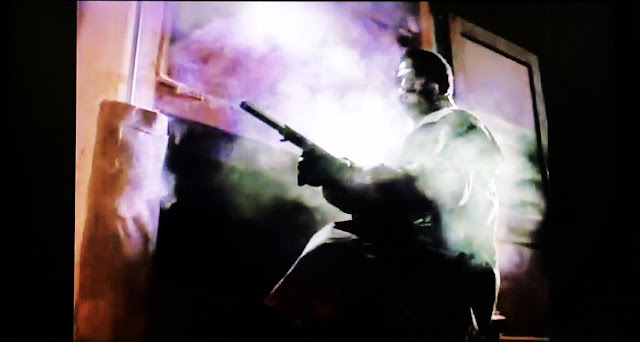 But the action is where it's at and that's where Street Hunter delivers the goods. While not filled to the brim with it, there's enough to keep you satisfied, and with enough of a Grindhouse aesthetic that makes it stand out. Actually, if I'm to be honest, I was surprised at how well the film looked and turned out overall. I'd never heard of director John A. Gallagher, but he did a bang-up job making the film look slick, gritty and handled the action sequences like a pro. Was there room for improvement? Sure, but still damn good regardless. It felt at times like something either Albert Pyun or William Lustig would have directed, oftentimes even emulating their very specific style. It made me wonder how much better it might have turned out had either of them directed it themselves. Not that it's badly done as it is, because it's pretty fucking awesome. Though James doesn't do a whole lot of martial arts fighting, instead choosing to use his badass gun, he does allow himself an amazing moment in the last act where he takes on a whole bunch of thugs at the same time in true American Ninja style.

A very young John Leguizamo plays Angel, the leader of the drug gang, and I have to admit, he wasn't as annoying as he usually is here. Reb Brown (Strike Commando, Yor) does not disappoint as the stone cold killer Col. Walsh. And what Reb Brown film would be complete without his trademark screaming while shooting guns, which he does plenty here. It's hilarious. 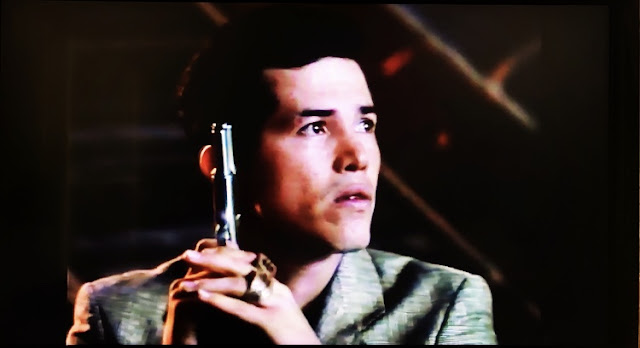 Street Hunter may not be for everyone, but if you enjoy low-budget vigilante films, this one delivers the goods tenfold. It oddly reminded me a lot of the Maniac Cop films for some reason. It's made and handled exceptionally well and James is given his prime moment to shine, literally just killing it with ease every second he's on screen. It's a shame this film isn't more well known, easy to come by or that it didn't spawn a franchise. It certainly deserves all of those things and I wish more people had the opportunity to see this. I'd personally love to see it get a decent release, even if it's a foreign Blu Ray release, like say from Germany (they've been killing it lately with hard to find films being released in HD and in widescreen for the first time), since it's never gotten one other than VHS here in the states.

But there is some good news. You can currently rent it on Amazon to stream for just a few bucks, which is how I saw it. It's not available for free on their Prime service, but still, $3 to rent for 30 days is one helluva killer deal. The quality was pretty good too, considering.
Posted by robotGEEK at 11:25 AM