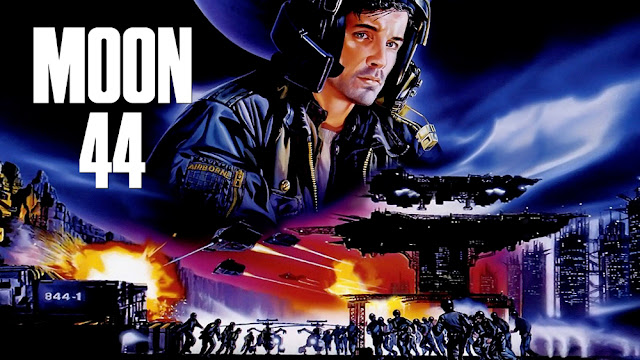 Before German writer/director Roland Emmerich hit it big in Hollywood with Universal Soldier, he got his feet wet with this vastly underrated sci-fi/action/thriller. Released 2 years before UniSol, Emmerich flawlessly displays his knack for outstanding visuals and exciting action with this under-the-radar gem. This was when he was really delivering some intensely visual films like UniSol, Stargate and Independence Day. But he had to start somewhere and this little seen and often forgotten gem was just the experience he needed to firm up his specific aesthetic, which also allowed him to work extensively with models and special effects. Let's get started.

Released in 1990, Moon 44 tells the tale of the future, where natural resources are nearly depleted and big companies now look for them on remote moons. When airships full of these much needed supplies begin disappearing on their way back to Earth, the company sends in an undercover officer to figure out what's happening. Thrown together with a group of prisoners (cheap labor and if they complete their jobs, they receive early release from their sentences), he soon discovers there might be sabotage in play, and must figure out who's responsible. 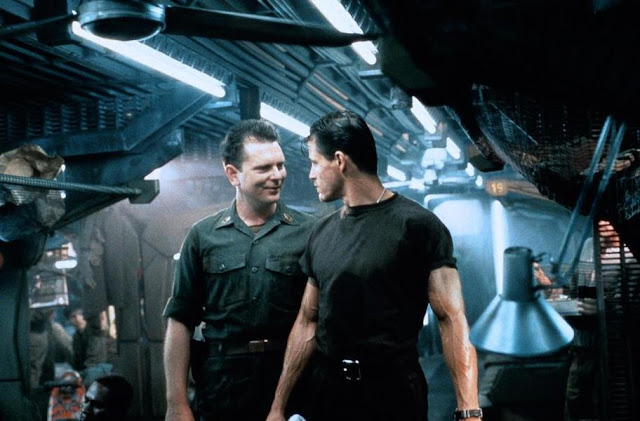 While there's not nearly enough action as you'd expect, Moon 44 more than makes up for in style, production design and it's excellent casting. Of course, there's Michael Pare, who some may say sleepwalks through his roles, but he sure makes the best of it. I had completely forgotten that Brian Thompson was in this, because he's always a welcome addition to any film. And then there's Stephen Geoffreys (Evil Ed from Fright Night), and Malcolm McDowell as the guy in charge of the mining station.

Aside from a completely unnecessary subplot involving prison rape, the film flows generally smoothly as our undercover agent works to try and uncover who's responsible for the missing ships, only to find his own life in danger. So at it's core, it plays out more like a thriller, only it's a damn good looking one, and they throw in enough action and kickass model-work to keep us action junkies satisfied. But really, it's in the visuals that keep you invested and Roland Emmerich delivers full force on that front. It's one of the best looking sci-fi thrillers I've ever seen; literally a perfect combination of Aliens and Blade Runner in terms of it's visuals and production design. Just for that alone, this has a ton of re-watchability for me.

This was just one of several films that Roland Emmerich made before hitting it big with Universal Soldier in 1992, which as we all know was then followed by genre-defining classics and franchise starters Stargate, Independence Day and unfortunately Godzilla, before he would transition to being known as the disaster king with big budget effects heavy films like The Day After Tomorrow, 10,000 BC and 2012. After revisiting this one, I wish Emmerich had stuck to this style of filmmaking, which made his earlier films like UniSol and Stargate so great. Though I will say White House Down was a surprisingly solid effort, and a sort of throwback to his older days as a filmmaker. 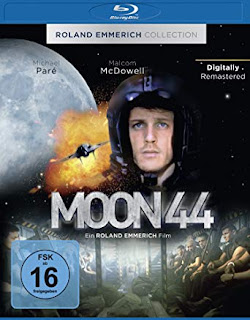 How to see it:
Sadly, here in the U.S., this has been virtually impossible to find in widescreen. While it did ultimately get a release on VHS, Laserdisc and DVD, they were all piss poor quality and what's worse, in full frame. You just can't enjoy or appreciate a film like this without seeing it in true widescreen, because Roland Emmerich put so much work and emphasis into every single frame of film, it would be like trying to watch Blade Runner in full frame, and you just really can't.

Thankfully, the fine folks over in Germany released this baby in an HD upgraded Blu Ray. But it gets better. It's region-free and in widescreen. And the best part is that it's relatively inexpensive, usually going for around $10-$20 on eBay. The transfer is excellent, and the sound quality crisp and clean. I can honestly say I'm extremely proud to have this in my collection and here's yet another win for Germany in putting out these hard to find films in a quality presentation.
Posted by robotGEEK at 3:56 PM