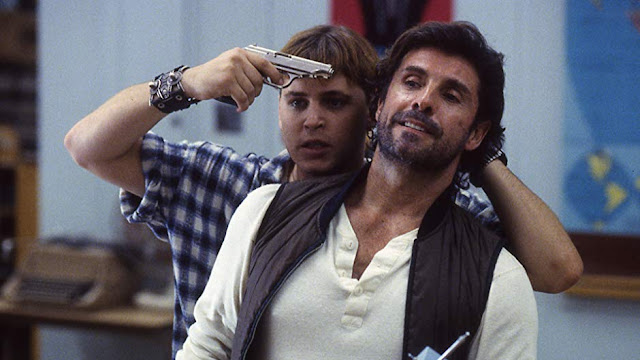 This Die Hard in a School Delivers the Goods

Released the same year as his infamous Vampirella adaptation, this Jim Wynorski (Chopping Mall, The Return of Swamp Thing) directed actioner was quite the pleasant surprise for me. While Wynorski's style and quality is all over the place from film to film, I'm happy to say that this little seen or heard of low-budget "Die Hard in a high school" action flick is easily one of the ever-prolific director's better films. Quite a feat when you consider he knocks out anywhere from 2-5 films every single year for the last 34 years!

With a roster of notable character actors and cult screen icons such as Gerrit Graham (Terror Vision, Phantom of the Paradise, Child's Play 2), the always badass Jeff Kober (The First Power, Out of Bounds) as the lead villain, the sexy as hell Rocky DeMarco aka Melissa Brasselle, Dick Van Patten (Eight is Enough, The Love Boat), Alan Thicke (Growing Pains), and of course, Corey Haim - who needs no introduction - Demolition High surprised me on a number of different levels. The cast, which at first seems so random, is actually pretty damn great if you ask me. Jeff Kober is always a reliable villain, and he does not disappoint. The sexy as hell DeMarco, here as his right hand girl and easily the toughest character in the entire film, plays a total badass here, dressed head to toe in tight black leather, sporting a hand cannon that's easily too big for her hands, and does it like a boss. You just can't take your eyes off her, not for a second, and I'm sure the cast probably felt the same way. Then there's Corey Haim, 10 years after his breakout role in Lucas (followed by The Lost Boys the following year), and handling the material well, in fact much better than I expected as the hero lead, who must use his street smarts to outwit and take down this group of terrorists who've taken his school hostage. But I think the real surprise for me was Alan Thicke, who plays his father and is also the new police chief. Hearing him curse (gasp Mr. Seaver!), act tough and lead his patrol was pretty badass and such a change of pace from what I had grown up seeing him as. 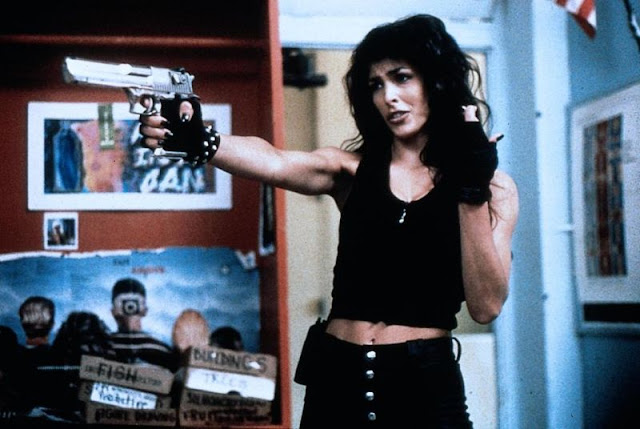 The film isn't without it's issue, but really, for this kind of film and production, they're minor and can easily be overlooked, because in the end, Demolition High delivers what it sets out to do, and that's deliver a Die Hard-style action film on a limited budget. Thankfully, Jim Wynorski is up to the challenge and delivers the goods in spades, giving the film a professional touch for the most part, looking a lot better than you'd expect considering it's budget, with some solid action sequences and a visual aesthetic that I've come to admire from the director when he was on fire early in his career. Most of all, it's a really fun film.

Demolition High is a pretty tough one to find, as it's only ever received a VHS release as far as I'm aware. No DVD or even a Laserdisc that I've seen, but I could be wrong. But I have good news! It's currently streaming on Amazon Prime, along with it's sequel Demolition University, for your viewing pleasure. It may also be on YouTube, so I'd check their too. I'm fairly new to Prime, so I don't know if films stay on there indefinitely or if they're taken off after a certain amount of time, but last I checked, it's there. 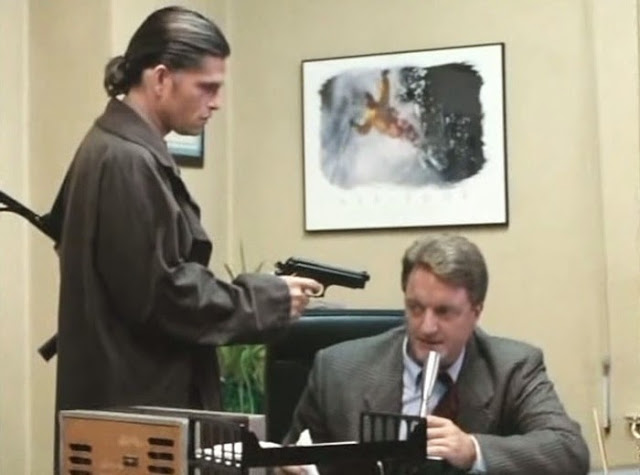