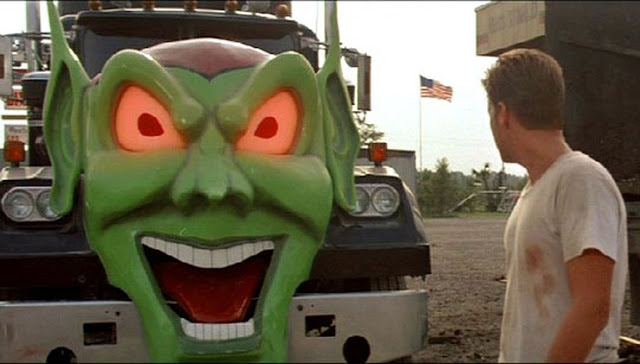 There's always been something about this film that I could never connect with. While I grew up on a healthy dose of 80's horror, I never could quite get into this one, no matter how many times I've tried. I'd always felt that it was dull, and never could quite match it's incredible opening. Still, I keep coming back to it every few years hoping I'll like it this time around. Well, that time finally arrived, so let's dig in.

While it's true that the rest of the film just doesn't quite reach the level of awesome as the first half, I still found it an incredibly satisfying film, despite it's lackluster and quite abrupt ending. Maximum Overdrive feels like pure 80's Horror Trash, and it's just a helluva good time. Quite absurd, never taking the time to take itself seriously....at all, and made surprisingly well by a man who admits being coked up on cocaine the entire time, thus using that as an excuse as to why he hasn't directed a film since. But guess what? A film directed by Stephen King high on cocaine is actually a lot better than most of his adaptations, both theatrical and Made-for-TV, made by other directors. After enjoying this one immensely, I wish he had directed more, instead of making this his one and only directing gig.

Maximum Overdrive suffers from a whole lot of problems, some of which really just don't make any sense if you analyze the shit out of it. So don't, or you'll drive yourself crazy. What you need to know is that anything mechanical or electronic begins to turn on by themselves, causing major havoc and chaos. An explanation is given, but it's a pretty silly one. As you can imagine, that also includes a lot of deaths, some of them quite spectacularly brutal in true 80's fashion, which really make the film as great as it is. The fact that AC/DC does the score and soundtrack, providing catchy rock tracks to these sequences is just icing on the cake.

Is it perfect? No, not by a long shot. The second half loses a whole lot of steam, never quite reaching the level of awesome that the first half gives us, and I found any single scene with Yeardley Smith (Lisa on The Simpsons) to be utterly unbearable. Seriously, she may very well be the most annoying character on any film I've ever seen in my entire life. I probably would have killed her myself, or let the machines do it instead of helping keep her alive. Thankfully the rest of the cast is quite good, led by Emilio Estevez, as an ex-con turned cook at a local diner/gas station who leads the charge in trying to outsmart and outlive these giant 18-wheeler's who've taken residence at this pit stop.

I think for me personally, the biggest surprise was how well King did handling the directing duties, in that he gave the film a really clean, solid looks aesthetically. He knows how to frame a shot, surprisingly, and it reminded me of the type of horror that was pretty prevailant in the 80's, where directors took the time to set up their shots and make the film look good. You can't say that anymore for the most part, but despite all the things stacked against him, King managed to deliver a visually pleasing film as well as a fun one. Of special note is that King's cinematographer was Armando Nannuzzi (Silver Bullet), who successfully sued King after an on-set accident resulted in Nannuzzi losing one of his eyes. It didn't stop Nannuzzi from working though, as he continued to work all the way up to 1998.

Ultimately, Maximum Overdrive, Stephen King's one and only directorial effort has enough things going for it that you can overlook the negatives. Just shut off your brain, don't over-analyze it, and you'll have a great time. It's a shame it didn't do well upon it's initial release, further personified by King's personal drug issues at the time, but at least we can look back on it today and appreciate it for what it is and nothing more, and that is as an excellent slice of 80's Horror Trash.
Posted by robotGEEK at 9:19 AM