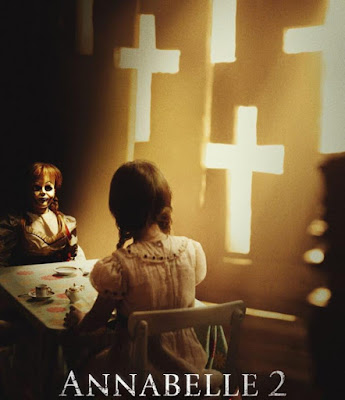 I should start off by saying that I'm generally not a big fan of new modern mainstream horror. With that being said, I only saw the first film because I was with a group of friends who really wanted to see it, so we all went. Not surprisingly, I was pretty let down. I don't know what I was really expecting, but it sure didn't deliver in a way I had hoped. So going into this one, I remained skeptical. In fact, I had no desire to ever see it to be honest. But a friend of mine who writes articles and interviews for horror magazines mentioned how much she loved it, and that it surprised the hell out of her. That's really all I needed to hear to entice me. So we went  in skeptical, but hoping for the best.

I can't believe I'm saying this because I despised the first one so much, but this was actually a damn fine movie. Dark, brooding, intense and highly entertaining with some great practical effects work and performances, especially from the little girl lead. It has such a strong "vintage horror" vibe and was able to hit all the right notes that I can't help but feel this very well may be one of the best new horror films I've seen in a theater in a very long time, all courtesy of Lights Out director David F. Sandberg. He did a phenomenal job on this. And let me tell you, I'm not a big fan of most modern mainstream horror, but I appreciate what James Wan is doing for the genre. He's literally revitalizing it. This is hands-down a big standout in modern horror. I got a real kick out of listening to all of the constant yells and screams in the theater audience - It's been a while since I'd experienced that. A lot of new directors can certainly learn a thing or two from Sandberg. You won't find any shaky-cam/quick-edit bullshit in here. No sir, it's nothing but class all the way. If you haven't seen it yet, even if you haven't seen the lame first one, check this out soon. You won't regret it.
Posted by robotGEEK at 12:36 PM