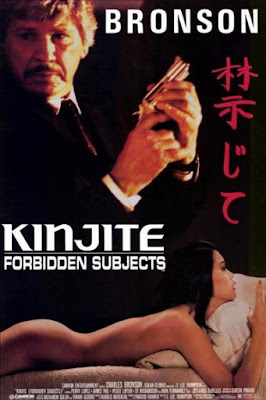 A few months back I went on a Charles Bronson binge after discovering just how good a lot of his 80's films actually were. I know, it took me long enough to realize that, but hey, better late than never. Of all the films Bronson released in the 80's, with most (if not all) of them being through his contract with Cannon Films, this is the one that never appealed to me right from the beginning. The title and lame cover art always made it look like a softcore Made-for-TV thriller. When I recently got this as part of a 2-Pk, along with 10 to Midnight, I threw it on the back-burner for months, intending to eventually get to it when I needed my Bronson fix. Well that day finally came, so let's dig in.

Kinjite: Forbidden Subjects was quite the pleasant surprise in that it was great, and far better than I anticipated. In fact, I ultimately liked it so much better than some of the more recent ones I've seen from Bronson, such as 10 to Midnight and Messenger of Death. Bold claim, I know, but hear me out. Despite it's lackluster title and marketing, ultimately this is a much stronger Bronson film than it gets credit for. It's pretty much exactly what you want from any of the films he did with both Cannon and his many collaborations with director J. Lee Thompson. It plays out just like the classic action/detective/thriller you'd expect, and Bronson again delivers another tough-as-nails cop performance, the kind you've come to expect from him during this time, only this ends up being surprisingly better than most in a number of different ways.

I really think that Cannon dropped the ball on this one. Starting with the title, which makes it sound like an Asian softore film, and it's weak U.S. promotional material like the poster and home video cover art, the film never looks or sounds like another average Bronson as a tough guy cop seeking revenge film, and do nothing for the film as a whole. In fact, it's a bit mis-marketed in that respect, and those who stayed away (including myself), really missed out on a solid 80's revenge flick. 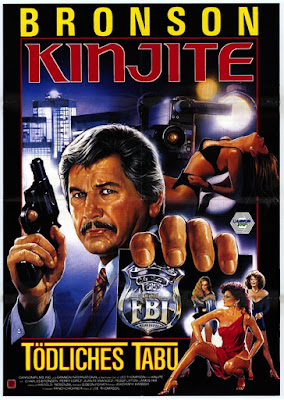 One of the most interesting things I discovered about this is that it's really 2 different storylines that only marginally converge in the last act, but not entirely either. What really surprised me was that most of the film deals with Crowe (Bronson) in pursuit of a pimp named Duke, played by legendary character actor Juan Fernandez. While Duke ends up kidnapping a young underage Japanese girl, forming the link to the other storyline, in all honesty most of the film's focus centers on Crowe's relentless pursuit of L.A. street pimp Duke, even if it means breaking the law. And this is really the heart of the film, even if it does go into the other storyline involving the Japanese culture, and a man's move from Japan to the United States with his family, who ultimately ends up being the kidnapping victim of Duke. They tie it in nicely with what's going on with the "Duke pimping underage girls" storyline, but I don't think calling it Kinjite: Forbidden Subjects was a wise choice. In fact, it might have even hurt the films box office potential.....possibly. That's just my thinking anyway. Too bad it was marred by poor marketing. Just look at that awful poster above, and then look at this kickass foreign poster on the right, which speaks volumes of "badass" and sells the film far more than our lame U.S. poster art did.

This film marks a number of important "lasts" in Bronson's career. It was his last film in the 80's, his last film for Cannon Films, and his last collaboration with director J. Lee Thompson. And really, they couldn't have gone out on a higher note. Well......maybe with Death Wish 4, which rules. But yea, it's all a matter of taste. I know some don't care for this, or even Death Wish 4, so some could say that Bronson and Thompson ended their decades long relationship on a low note, but not me. I feel quite the opposite, and while this film doesn't break any new ground, it does offer ample amounts of entertainment in the revenge/detective/thriller genre. It's exactly what I was hoping for, only better. 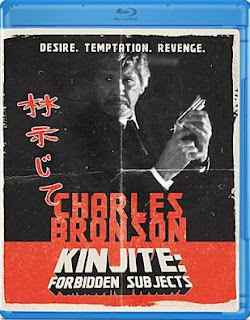 How to see it:
Kinjite is easily available on a number of different formats (VHS, BETA, Laserdisc, DVD and Blu Ray) as well as on a few compilations. The cheapest and best deal would have to be the 2-PK DVD of this and 10 to Midnight, which come in widescreen. I wasn't even aware of this Blu Ray from Olive Films that was released back in 2015 until just now, and I can't help wondering how great the print quality will be. And I mean, look at that badass cover. Arguably the best cover art for this film to date, not including any foreign versions. Why couldn't they do something like that from the beginning? This Blu Ray will run you anywhere from $15-$30, depending on your preferred online retailer. Unfortunately there are no special features on this release, just the film, but the best presentation of it to date, so if you're a Bronson/Cannon fan, this may very well be worth the plunge.
Posted by robotGEEK at 10:43 AM