Tales From The Crypt Revisited: Demon Knight & Bordello of Blood

As I continue to dig into The Complete Box Set of the Tales From The Crypt episodes from HBO, and having a complete blast doing so, it suddenly hit me that I hadn't seen either of the 2 feature films since their original theatrical releases. I figured now would be the best opportunity to do so since we're smack in the middle of a TftC kick. And as luck would have it, a good friend of mine just so happened to have them on Blu Ray. So let's dig in. 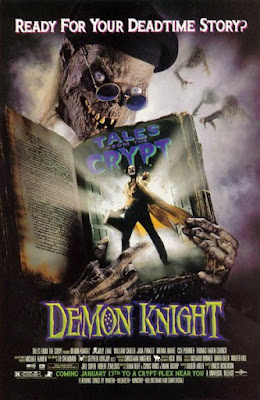 The one and only thing I remembered about this was that it was directed by Spike Lee prodigy Ernest Dickerson. And I always thought how odd it was for him to dive into genre films like this when he worked for Lee on a few of his classic dramatic films, and even beginning his directorial career with the hard-hitting urban drama Juice before diving into horror and action for a few years. 2001's Snoop Dogg horror film Bones would be his last feature film and he has stuck to television work ever since then. But hey, we're here for Demon Knight, his 3rd feature film. So let's dig in.

Between the two TftC films, this seems to be most people's favorite, and I can understand why. Dickerson's direction is very much in tune with the HBO series, and Billy Zane delivers one helluva performance as The Collector. And if truth be told, I doubt this would have been as good had someone else taken the role. Zane really gives 110% here and makes every single moment he's in a total blast. I wish I could say the rest of the film delivered the goods as much as Zane did, but it doesn't. It's not bad, and for the most part feels like an extended episode of the series, which speaks volumes of it's uneven and hit or miss structure.

Going into this, I was pretty open to whatever. As the show has proven that you never know what to expect, I really didn't know what to expect. And since this was their first full-on feature film and quite a big deal, I was also hopeful that it would deliver the goods as much as most of the show's episodes had. And while it was entertaining, I can't say it was really all that great or fun. All of the actors, including Crypt regular and star of Demon Knight William Sadler, do well, even a very young and somewhat out of place Jada Pinkett, before she gained the Smith moniker. The gore is surely present, if at times ineffective. But I have to say that my biggest beef would have to be with Dickerson's totally uneven direction. There are moments of great visual kickassery, but then surrounded by lazy camerawork and uneven structure, you're kind of blindsided. Or at least it did me. And it's a bit frustrating too, because the scenes that standout are incredible. Dickerson obviously knows how to create some truly stunning images having worked with Spike Lee on several of his films, but it's never consistent in here and for the most part, this film looks like any of the "so-so" episodes of the show. But hey, that's just my opinion.

If you're a fan of the show, you'll enjoy this film. Whether you love it is a matter of preference. I did not. But I did love Billy Zane's performance. I've never seen him so lively and having such a good time and really makes the film as good as it is. And while I feel it definitely could have been better overall, there's no denying Zane's magnetism. The confident cast does their best, with Sadler in the lead, and the effects work is commendable. And really, that might be enough for some people. 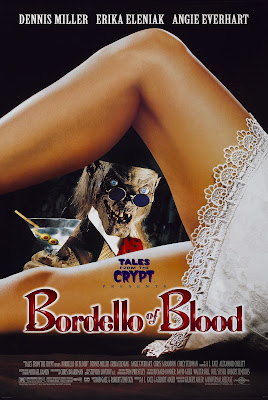 Having not been all that impressed with Demon Knight, I still went into this one with some excitment and enthusiasm. Just like that film, I remember virtually nothing about this, even though I'd seen it in the theater. You could argue that's a bad sign, but in my case, sometimes I just have a really bad memory. When the credits began to roll and I see names like Corey Feldman, Chris Sarandon and Erika Elaniak, well that just sounded like a recipe for a really good time. Did it deliver?? Let's dig in.

Hell yes it did. In fact, I ended up loving this one so much more than Demon Knight, even though DK seems to be the one that gets more love. For all intents and purposes, Bordello of Blood was just a really silly, cheesy, bloody fun time. Whether that was their intention or not is up to debate, but the end result spoke volumes for me, and I loved every second of it. It's the good time I was hoping for with the first film, but this one offers it in spades and there are a lot of reasons and people to thank. For starters, let's give a big thanks to the films writer/director Gilber Adler, who was one of the series regular producers and has gone on to be a high profile producer in the industry with a lot of large projects under his belt, here making his feature film directorial debut, and he does a killer job. Though I wasn't familiar with Gilbert Adler, other than being a significant member of the team behind the series, I have to admit I was pleasantly surprised with his direction in here. In fact, much more so than Ernest Dickerson's work on the first film. He uses a very restrained and simple approach, but it works really, really well. He doesn't over stylize anything, yet it's a slick looking film at the same time. I can't explain it. Where Dickerson would offer an insane number of dutch angle's and sweeping camera movements, Adler keeps the camera still, rarely ever venturing into handheld territory, and does a fantastic job framing his scenes. It reminded me of all the best episodes of the show. Though nearly everyone involved has gone on record saying this was a disaster from the start behind the scenes and during production, I would never have guessed that by the final product. And what blows my mind even more was that this was ultimately a box office bomb, destroying any plans for the third film in the trilogy.

I have to admit, I loved seeing Corey Feldman in a big budget feature. I remember he was going through drug rehab and trying to get his life back on track during this period, and if this film is any indication, the guy still has the goods and really gave it his all. In fact, he seemed like the only one really having a good time and enjoying himself. Erika Elaniak was a surprising choice for her character, as she's usually playing the blonde bombshell, but she was actually a good fit for the role. If you hear her talk about the part of her characters background in the "making of", you get a better sense of why she was such a good choice for the part. Though her background story for the character was never included, there are bits and pieces of it in the film if you pay attention. But really, it's Chris Sarandon who stole the show for me. His televangelist character was hands-down the best part of this film and they just couldn't have picked a better person. He was hilariously cheesy and over the top and I wish there was an entire film based just on his guitar-rockin' satan-bashing televangelist character alone. This film just made me love him more. And then there's the lead vampire, Angie Everhart. You know, she wasn't bad. Clearly a newcomer to film, I have to admit that I've seen worse, and though most of her dialogue was hilariously cheesy, she handled it like a pro and also seemed to be one of the few having a good time.

The same cannot be said for star Dennis Miller. I admit, I enjoyed him in the part. His very particular snarky sense of humor is on full display here, and I clearly felt that he ad-libbed nearly all of his dialogue. And it's that sense of humor that really worked well, and actually made it much more funny......for the most part. Of course, there still always seemed something off about him in here and even though he hammed it up and was just a condescending ass in the entire thing, even in the few moments where he really put in some solid acting, he just didn't look like he wanted to be there. And that couldn't be more true as I watched the "Making Of" documentary located on the Scream Factory Blu Ray release, which was fascinating to say the least. The entire doc pretty much consisted of the films actors and production trashing Miller and talking about how he was essentially a shithead to every single person on set and that it was an easy million dollar paycheck and he did not want to be there, so he made life hell for everyone involved. He even helped in the film's box office failure by appearing on Leno and begging people not to go see the film. But really, get the Blu Ray and watch the doc for yourself. It's fascinating. They talk to nearly everyone involved and we get some deep insight into all of the turmoil on set from the people who lived it. Its still funny though. I never would have guessed any of that from watching the film. It was a blast from start to finish and I'm shocked it bombed as big as it did. I still find it far better than Demon Knight in every single aspect. I guess you just never can tell.