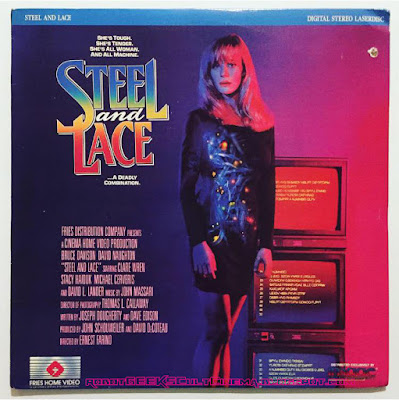 I had come across this one recently on a list of underrated low-budget sci-fi films you may have missed. While I'd already seen all of the other entries on that list, this was the only one I hadn't, and I was now intrigued. You see, I remember this film, usually as it sat on a video store shelf back in the 90's, but I never actually got around to seeing it. That is until I found a solid recommendation, courtesy of Derreck over at A Taste of Cinema. As luck would have it, after I read the article I jumped on eBay and found a Laserdisc for under $10. Score! So let's dig in.

When Gaily (Clare Wen) is raped, she commits suicide by jumping off a building when her attackers are found not guilty and released. Soon the attackers are being hunted down and killed one by one, all by someone who they thought was dead.

On the surface, Steel and Lace is the kind of film experience I live for: low-budget sci-fi action thriller that usually falls into the "So Bad, It's Good/Campy" territory, or ends up surprising me by being a competent, well made and entertaining film. Sadly, this one is neither. It's a film that shows promise from time to time, only to be surprisingly void of entertainment value for the most part. Sure there are moments that shine, like the surprisingly solid cast for starters, and some of the kills are bizarre and cool, but then there are too many that are not, and the film suffers for it. Interestingly enough, had there been more creative kills and more of the bizarre WTF? moments, it could easily have passed for awesome Bad Movie Night fodder. As it stands, it's just alright low-budget sci-fi cheese. 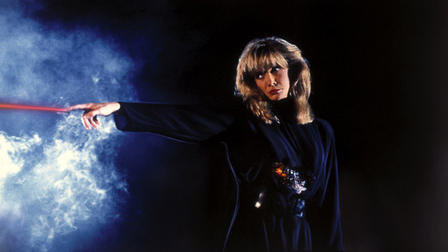 One of the things that will more than likely surprise you more than anything is it's cast. For starters, there's David Naughton of An American Werewolf in London and Midnight Madness. Then there's Bruce Davison (X-Men, Lords of Salem) who's much too good an actor for this material, and who actually was nominated for an Oscar just 2 years before, but he and Naughton do solid work with limited resources and they should be commended. The star of the film, Clare Wen, sadly doesn't come across as memorable. While she's not bad, she doesn't really carry the film very well, and certainly doesn't seem the right fit for the part of a sexy siren who, through various disguises, seduces her former abusers one by one to their death. She's got the acting chops for sure, which she demonstrates in the beginning of the film during one of the emotional moments, but was she the right choice as a sexy killer cyborg who exacts revenge on her rapists? I'm not so sure.

Effects wiz Ernest D. Farino, who's worked effects and animation on films such as The Terminator, Spacehunter and The Abyss in his long career, here marks his directorial debut. There are moments that shine and show promise, but Farino doesn't really mark the film with enough of these surprisingly brilliant elements to maintain it's momentum, and the weak moments, including some of the less inspired kills, sort of spoil the whole experience. He has the talent, but just doesn't utilize it well or to it's full potential.

As it stands, it's an amusing experience. But where it could easily have fallen into either the entertaining Bad Movie Night universe, or just an enjoyable low-budget sci-fi film, Steel and Lace is stuck somewhere in the middle, making it somewhat a frustratingly lackluster affair.
Posted by robotGEEK at 12:01 PM