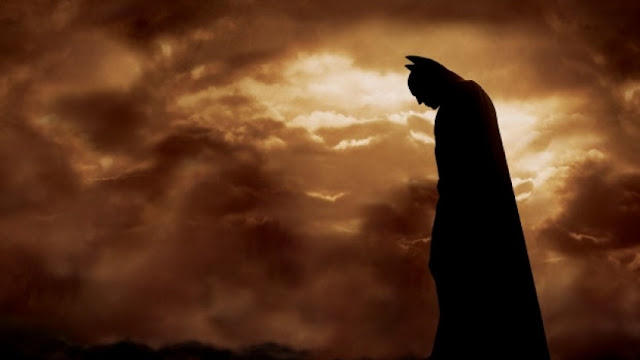 I make no qualms about my dislike for Christopher Nolan films. I feel he's a good filmmaker, always on the verge of being a great one, but always doing something to fuck that up. The thing I do like about him is his passion for film, especially the importance of 35mm, and his love for cinema. He's clearly a talented filmmaker. He possesses that gift, there's no doubt about it, but some of his creative decisions just blow my mind sometimes. But I'll get to that in a bit.

As he's not one of my favorite filmmakers, I don't rush out to see any of his films. I get to them eventually, except for the Batman films. They came out in a time when I was hungry for Batman material. And though I wasn't a big fan of Dark Knight Rises, I did enjoy The Dark Knight, but my memory of Batman Begins is fuzzy. I think I'd only ever seen it that one time in theaters, so I was kind of itching to revisit it recently. Not really sure why either, I just kept feeling that of all the Nolan films I've seen, I might actually enjoy this one the most. As luck would have it, TBS was playing this on a Sunday afternoon. Perfect. Lets dig in.

The many years since my initial viewing of this classic have been quite kind to Batman Begins. I loved it. There were so many creative touches courtesy of Nolan that I just loved, and to be honest, quite surprised this is the same Nolan who makes films today. There's something very toned-down and simple about this film, even though it's a bit epic compared to other "normal" films. But I guess in Nolan's "Batman Universe", this is a much smaller film compared to the 2 that followed, and I love it for that. The film progressed very nicely compared to "most" of his films, and guess what??? It wasn't confusing as hell, which was another aspect I loved. I just feel his films are overly complicated when they don't need to be. Can anyone truly understand "everything" that's happening in The Dark Knight? Sure it's a brilliant film as a whole, but it veered off into so many unnecessary directions that like most of his films, comes across a bit pretentious. Not to mention, I would constantly lose interest. Lucky for us, he hadn't headed in that direction yet here. 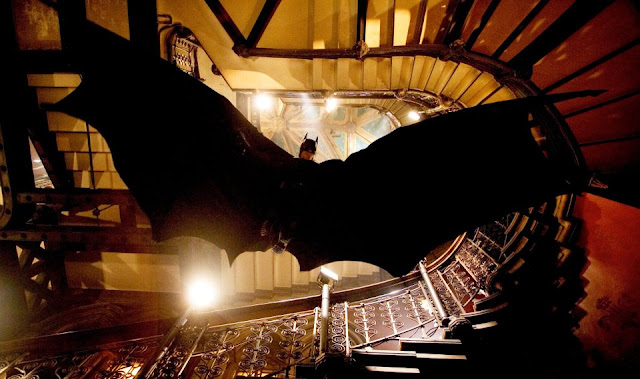 I think one of the strongest aspects to this production was Nolan's use of miniatures, model work and practical effects. For a film made in the 2000's, it was a beautiful and refreshing thing to see. There's just something much more visceral utilizing model work rather than CGI. Sure Nolan uses CGI often, and more often than not it's unnoticeable, which is quite effective. The last thing you want is to be taken out of the moment by an overuse of CGI. But then there are moments when it is, and it's hard to really leave any kind of lasting impact when you know that effect you just saw was the result of a computer and not something tangible. Kudos to Nolan for going the practical effects route with this one. The whole third act with the train was astonishing and oftentimes breathtaking to me.

As much as I typically dislike Nolan films, and as much as I loved this one, there were 2 problems I did have. First and foremost, it's a problem I have with "all" Christopher Nolan films. And that is that as strong a director as he is, the guy can't shoot a fight sequence if his life depended on it. This is the one area he loses me every time. For some reason, he always turns to handheld "shake the shit out of the camera" territory and always shoots up close, rather than allow us to see what the hell is going on and who's fighting who. I can never tell, and always give up trying to figure it out. I've never seen a fight sequence from him that I liked, because it's an editing and composition mess every single time. Yea I've heard "he shoots this way to put you in the moment, like you're in there" excuse, but I don't feel it does anything other than make you nauseous. But that's just me.

Another area I found that I didn't really feel worked well with the rest of the film was, to my surprise, the entire first act where Bruce is learning his skills from Ducard (Liam Neeson), before heading back to Gotham. I don't know, it just feels so detached from the rest of the film visually. A few expertly framed shots are marred by a constant handheld lazy aesthetic that completely takes away from any impact these scenes could hold. Given the locations, I'm shocked he chose to shoot nearly all of this first act this way instead of really making it look stunning, like it very easily could have and not just any other film. You may disagree with me on this one, but I just really felt it took so much away from the aesthetic tone of the rest of the film. It came off as very ho-hum to me, where it really could have been a stronger way to start the film. 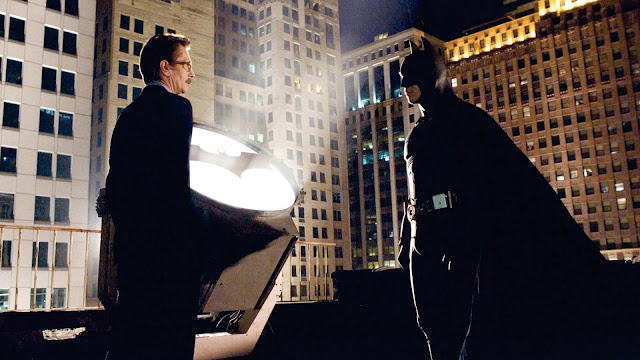 Despite my two gripes, I really and thoroughly enjoyed this one. So much so that it's my favorite of his Batman trilogy. I loved the stripped down feel to it, and some of his work, including the Tumbler sequence, are simply incredible. There are strong moments of greatness, and then there are moments that make you wonder just what the hell he was thinking with certain creative decisions. Regardless, it's one helluva Batman film and though I have never been a fan of this Batman suit design, or of Christian Bale in the role, as a dark crime noir style film, it delivers some solid goods.
Posted by robotGEEK at 10:06 AM