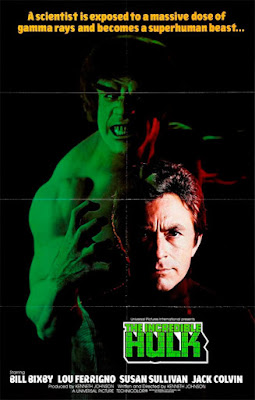 One of the things I really love about Hulu Plus is their plethora of vintage television shows. Being someone as old as I am, but having never gotten a chance to actually watch a number of these during their initial run, I'm discovering that I really missed out on some fantastic television viewing growing up. Sure I remember all of these, but I couldn't watch everything, and now I'm finally getting the chance to check a bunch of these out for the very first time, and having a blast doing so. The Incredible Hulk series (1978-1982), was one that I would watch casually if I ever caught it, but never was obsessed about it enough to make time to catch every single episode. So this has been fun actually making the time to dig into these in order, without missing any episodes in between.

This 1977 TV Movie, which also acted as the series pilot, was an hour and a half long (2 hours with commercials) film intended to kickstart the Hulk series, and it worked. The series would go on for a healthy and respectable 5 years, followed by a number of TV Movies reuniting Bill Bixby and Lou Ferrigno. But it all started with this Movie/Pilot. As I watched this enthusiastically, there was something very strong about it. I noticed it right from the beginning, but it only got more and more prominent as the film went along. And that "something" was that this was perhaps the best interpretation of The Incredible Hulk story I'd ever seen. Despite it's countless remakes and inclusion in the Avengers franchise, none of those films captured the heart of the story and character quite like this does. We shouldn't be surprised though, right? These day's it's more about spectacle and effects rather than story. The bare-bones stripped-down approach to the material is effective, and there's just something very highly enjoyable about the entire experience here, from the solid direction, impressive script, and incredible performance by Bill Bixby, who shines so high above everything else here. It's no wonder he became the embodiment of the David Banner character, here changed from Bruce to David. He carries the show entirely, and it's his strong acting chops and magnetism that sells it. Of all the actors I've seen take on the role, none can match Bixby's fierce intensity and power. 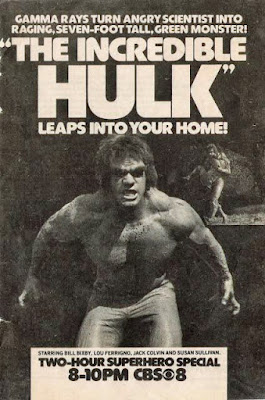 And of course, there's the one and only Lou Ferrigno, who takes on the career-defining role of the Hulk. Lou Ferrigno "is" the Hulk. Nothing I can say about either the character, or his portrayal of the character can make any kind of sense other than that Lou Ferrigno is the fucking Hulk, plain and simple. There have been countless articles, discussions and theories as to why that is, but the fact of the matter is that nothing we can say right now hasn't been said before. Ferrigno will always be associated with the character, and will always be the best version of him, the same way Schwarzenegger will always be The Terminator, no matter how many times they try to give us a new one.

By the time the film was over, I gleaming. This was such a fantastic film from start to finish, and such a strong adaptation. There were no weak links in here, and I was blown away by how much I enjoyed it. For a film that's exactly 40 years old, and still manages to be the best adaptation to date, says a lot. And then when the film was over and the end credits rolled up, I saw the "Written and Directed by" credit and I instantly knew why it was so good. This particular film was spear-headed, written and directed by Kenneth Johnson. Now, most might not know that name, but I sure as hell do. Why? Because he just so happens to also be the brains behind my all-time favorite sci-fi series "V: Enemy Visitors". Primarily, he's the creator, and was the writer/director of the first Mini-Series. There would be a second Mini-Series soon after called "V: The Final Battle", followed by the series, which only ran for a single season. He wasn't involved in either of those later efforts, and the series would suffer as a result. But with the 2 Mini-Series, especially that first one, which he wrote and directed himself, you can see so much talent in his writing and directing abilities. So when I saw he was also responsible for this TV Movie, I wasn't surprised one bit that it was as good as it was. He's an exceptionally talented filmmaker and based solely on his work on Hulk and V, he should have gotten bigger and better gigs.

I think something that also works in it's favor is it's late 70's setting. There's just something so refreshing seeing a movie like this made during this time. It's a unique spin on the material, and almost acts as a character in the film, because it certainly adds a dash of nostalgia and charm to the experience. I also loved the Frankenstein elements thrown in for good measure. I was told that Hulk was in fact based on Frankenstein, which makes sense, but I can't confirm that. The scene that stuck out to me the most was when Hulk, after having turned for the very first time, wanders over to a lake and finds a young girl by herself, a sequence taken right out of the original Frankenstein film. 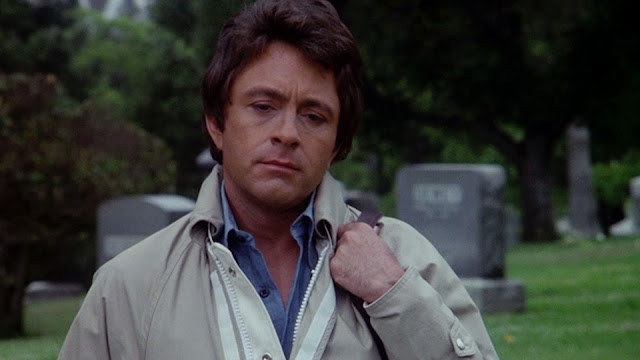 Going in, I was hoping for a bit of nostalgic fun, but I wasn't prepared for just how great this movie would end up being and how much fun I would have watching it. It really is hands down one of the best superhero films ever made, and the best adaptation of the character I've ever seen. Sure it's not without it's flaws, but just the whole practical aspect of this production makes it so much fun and more enjoyable. It's grounded in a reality circa the late 70's and makes it so much more organic. Writers can certainly learn a thing or two from Kenneth Johnson. I wish some of these superhero films these days would go back to basics like this. I guess Netflix's Marvel shows like Daredevil and The Punisher do, so I hope they keep it up. Maybe that's why they end up being better than most of the big budget movies they keep throwing at us?
Posted by robotGEEK at 7:19 AM