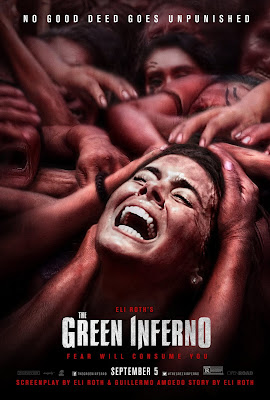 By now, we all know the history about this film. Having sat on the shelf for a full year after it's completion due to it's distributor's financial difficulties, the long wait only getting us all more and more impatient for it's eventual release. Then word comes that it found a new distributor, and the moment we've all been waiting for has finally come. Of course, I had to see it on opening night. Just the idea of Eli Roth's cannibal film represented a lot of what we had been needing in the horror genre, a genre saturated with lame remakes and tedious PG-13 horror films. So how was it you say?

I'm so torn with Green Inferno. On the one hand it's a brave film, made by a brave filmmaker who doesn't cater to, well, anybody or anything really. He makes his own films the way he wants to, and doesn't make or do anything to satisfy anyone else's needs other than his own. That is a trait I admire in him. He's not concerned with box office numbers, or pleasing the studio heads. Not in the least. He wants to make horror films, plain and simple. And for that, I give the guy mad props, even if he's not the most skilled at it.

On the other hand though, The Green Inferno doesn't quite live up to expectations for a number of reasons. First, it takes it's time setting things up, trying to make us care for the characters as people before their fateful trip. While these setups are necessary, and oftentimes crucial in character development, 30 minutes was just too long, when all we really want to see is cannibal action. That brings me to another issue. When the group, those that survived the plane crash anyway, are captured, we are treated to a pretty brutal killing. And let me tell you, this sequence is the highlight of the film. So much so in fact that the rest of the film couldn't possibly measure up to that one sequence, and sadly, it doesn't. While the rest of the film, which depicts the remaining survivors being tortured and kept prisoners by the cannibalistic tribe, does offer a few intense moments, none of it holds a candle to that one sequence. That's really unfortunate when considering what kind of film this is supposed to be, and what film in particular it takes it's inspiration from.

One of the other issues we all had was that shockingly, this had some humor. While the few sequences were indeed quite funny, it kind of throws you off and takes you out of the experience, because you don't expect it. And that's a complaint I keep hearing from a lot of people, that it was funnier than they were expecting. "Funny" is not a term you think of when going into a cannibals-in-the-jungle film.

Overall it was a fun film, but not a film I will have any desire to revisit again. It takes it's time building things up, blows our minds with an insane kill halfway through, then slowly becomes less and less interesting as it goes on. It never reaches the level you expect it to, and it kind of leaves a lot of questions unanswered, like what ever happened to the tribe's psycho bitch leader, who was the most fucked up and brutal of the bunch? We don't know. She disappears somewhere in the end and is never mentioned again. Roth has never been one of the most talented, or most visually striking filmmakers out there, but he is a brave one. I will give him  that. Sadly though, this won't be going down in the history books or even reach a cult status. It's just not that kind of film, though we were all hoping it would be.
Posted by robotGEEK at 4:13 PM