Texas Chainsaw Massacre: The Next Generation 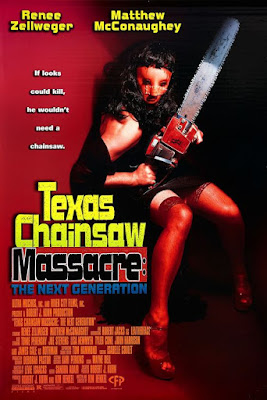 I honestly don't know what the fuck Kim Henkel was thinking when he made this. I'd long resisted watching this because it's reputation is terrible, and because, well, it just didn't look very good. But hey, it's getting close to Halloween, and I'm in horror mode, which means going out and looking for films I never got around to watching before in the horror genre. I did hope for one thing though; that this would be "So Bad, It's Good". I hoped.

TCM:TNG begins with a pretty killer title sequence. So I'm already feeling a little better about this. As the film progresses for the next hour, I'm actually thinking that this isn't all that bad. While Henkel is no Tobe Hooper, he does give the film a certain Grindhouse look and vibe; it's gritty, washed-out color palate gives the film a much older look than it's 90's setting. But honestly, that's really where the praise stops, because the rest of the film is a fucking mess.

Let's start with the actors. They're annoying as shit. How are we supposed to care about what happens to them when we don't even like them as human beings? Then there's McConaughey, who's so over the top that I think the point was that he would come off as scary, but only comes off as annoying. He made this a year after Dazed & Confused, and before anyone knew his name. The same thing with Renee Zellwegger. But we already know all that history. 2 years later they both went on to hit the big time and have tried to erase this from their memory.

As you know, Kim Henkel, who wrote and directed this, was the co-writer of the original Chainsaw film directed by Tobe Hooper. This was Henkel's one and only directing credit, and has only a few other titles under his belt as a writer. He intended this to be the first true sequel to the franchise because as you know, each film pretty much has it's own universe, not following any coherent storyline from any of the other films before or after, which is one of the things that make this particular franchise stand out from the other slasher franchises with countless sequels. Does Henkel succeed in making this a true sequel? No, because the "family" are all new characters. And that's another thing that might surprise a lot of people who haven't seen this entry yet. Rather than focus primarily on Leatherface, Henkel puts the majority of the focus on the entire family, more often than not zeroing in on McConaughey's character more than any other. In fact, Leatherface takes quite the backseat to the character of Vilmer (McConaughey).  On top of that, Henkel doesn't really add anything new to the character of Leatherface; quite the opposite. You can easily say that this particular film pretty much plays out like a remake of the very first film, even going as far as essentially redoing the end scene with Leatherface swinging his chainsaw in the air in frustration when his victim escapes. Seen it all before.

TCM:TNG is frustrating. When we get to the third act, a whole new character is introduced out of nowhere, with no explanation. He shows up in the middle of the chaos, and seems to be in control of everything that's going on. But who is he? Why or how does he control the family? The indication is that they do all the kidnapping and killing for him, but why? Don't even get me started on the scene where he opens his shirt, only to reveal something truly bizarre, which is also never explained. Then, just to make things even more confusing, the same guy ends up setting the last remaining victim free, "and" even takes her to the hospital! If that wasn't strange and frustrating enough, Kim Henkel decided it would be a good idea to throw in one last, strange sequence. It takes place in the hospital, and the victim, as she's being questioned, looks over to see a woman being pushed in a stretcher. The camera lingers a bit too long on this "anonymous" person, as it does on the orderly pushing the stretcher. You think, "okay, there's something to this. Nobody just shoots a sequence like this for no reason, lingering the camera on these two for this amount of time with dramatic effect as the camera fades out." But that's exactly what he did. No explanation as to who these individuals are or why we're even supposed to care. If you do some digging on IMDB, you'll get the answers under the "trivia" section, but still. it was handled so badly, and whatever the intention was, it's lost on the viewer.

TCM:TNG was a failure, financially and in the eyes of the public and hardcore Chainsaw fans. Henkel never directed again and it took 9 long years before anybody would touch the franchise. Ultimately that would be Michael Bay's Platinum Dune's production company with their 2003 remake, which isn't bad, and far better than this. Personally, I've always loved Part 3, and though it doesn't quite follow the original storyline and characters, and pretty much stays gore-free due to the MPAA, it's the closest thing to the look and feel of a real Chainsaw sequel to me. It's also the one Chainsaw film I've revisited constantly throughout the years, more than any of the others.

Though I went in with hopes of a "So Bad, It's Good" experience, TCM:TNG is just bad. I get it. I understand now why it's never discussed . It's really not that bad in general for most of it, but shockingly falls apart in the third act in such a drastic way that there's just no way to salvage it.
Posted by robotGEEK at 12:41 PM