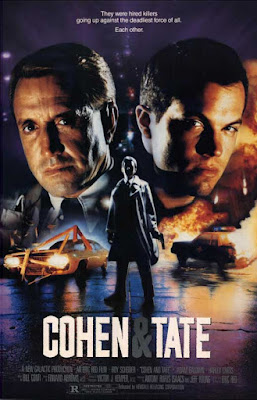 Eric Red is a severely underrate filmmaker. That's just a sad fact. The guy is responsible for so many great cult films of the 80's and 90's that it's criminal that he's not more well known. In the 80's, he wrote the screenplay for the cult classic The Hitcher. He also co-wrote the vampire favorite Near Dark. Going into the 90's he only made a few films, but they were quality works, beginning with 1991's excellent Body Parts as both writer and director, followed by the equally impressive werewolf tale Bad Moon in '96, also as writer and director.

During the 80's though, he was just a screenwriter. That is until he tried his hand at directing with his thriller Cohen & Tate in 1988. Being a huge fan of The Hitcher, Body Parts and Bad Moon, as expected, I was excited to check this out. Knowing it wasn't related to horror in any way, I was curious, and slightly cautious. Horror really seems to be his strength, and going into a thriller about 2 mismatched hitmen who have to travel cross-country with one of their targets while simultaneously trying not to kill each other was an interesting idea, if done properly. When Shout! Factory released a gorgeous widescreen print of this lost gem on blu ray a few years ago, I always had this on my list. When it finally popped up on eBay for a price I couldn't pass up, I finally jumped on it.

Cohen & Tate is a great first film from a first time director. While there are things that come off as amateurish, there is also a lot that he gets right, and a lot that kind of blows your mind at how awesome he puts things together. On a visual scale, Red's directing style is pretty straight-forward, not really having a definable style per say, but it looks good. It looks professional. But then there are scenes that will impress the hell out of you in their structure and execution. There are shots that remind you of the greatness that is to come, of the talent hidden right beneath the surface itching to get out. It's obvious with Cohen & Tate Eric Red was trying to find his groove, and he's almost there.

One of the things that really works well is the casting of Roy Scheider. The guy is a pro, and no matter what film he's in, he only makes them better. Though he was brought in last minute to William Friedkin's monumentally excellent Sorcerer, I can't imagine it being as successful had they gone with their original choice. But of course, that's just my opinion. Adam Baldwin, who plays the other hitman, who's character is much younger, new to the hitman game, and severely immature with a hair-trigger temper is everything that Scheider's character is not, resulting in some memorable exchanges between the two. Baldwin is great casting in this as well, if only somewhat annoying with the constant gum smacking. I always wondered why he never got the big break he deserved. Of course geeks will always remember him from Firefly, but as far as starring or co-starring in studio films, he never really got that big role.

I was surprised that this wasn't as violent as I was expecting.  Of course, I base that purely off of his other works. But even so, the story of two mismatched hitmen, the possibilities are endless. But I found Cohen & Tate surprisingly subdued. Digging into the Special Features though offered some insight into why that is. Writer/Director Eric Red stated that for several of the scenes you expect there to be violence, he felt it would be more strong if he actually didn't show it, rather implying it and letting your imagination do all the work. But then you watch the Deleted Scenes, most of which consist of these violent sequences that were edited and trimmed out of the existing sequence, and I can't help but disagree with his motives. I found the scenes to be so surprisingly brutal and violent that they left a huge impact. My personal feelings are that the violence cut out of the final cut should have been kept in. The cut violence is definitely shocking, making the film much more impactful, and showing how savage these two hitmen can be. I really wish that Red would have released this Shout! Factory release as Uncut, or as a Director's Cut. I like the film enough as it is, but it just would've been better and a much harder film in general.

Cohen & Tate is such a different film than anything Eric Red has done. Sometimes brutal and violent, other times quiet and moody. But as a whole, awesome.
Posted by robotGEEK at 2:44 PM