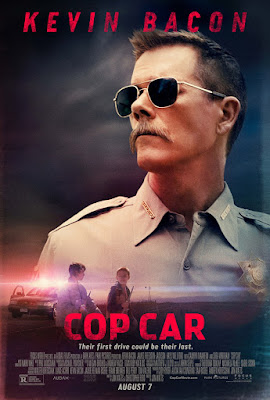 Jon Watts is a name you will be hearing more often. I'm sure of it. Having only done short films and a lot of television work, he blew me away with last years Clown, based off of one of his short films from 2010. Clown worked so well because it was genuinely creepy, effective horror. He didn't rely on cheap tricks or jump scares to scare us. It was great compelling storytelling, great direction, great practical makeup effects, and solid scares. In fact, I'd say it was one of the better horror films I'd seen in years. It left a lasting impression, and most of all, it impressed the hell out of me.

Going into Cop Car, I had no idea it was from the same writer/director. Why would I? They're two completely different genre's, and nothing about Cop Car, not the cast, not the style, not the subject matter, would suggest to me that that was the case. Even more interesting was that I didn't find that out until "after" the film, since he put the credits after the film and not before. So that was an even bigger surprise. When "Directed by Jon Watts" scrolled down the screen, I yelled "Holy shit! That's the guy who did Clown!". I said that because my movie partner and I both loved Clown, so this was just a total surprise to both of us.

Cop Car is a thriller about 2 young boys who see a cop car seemingly abandoned in a field. When they take the car joy riding, little do they know that the cars owner, Sheriff Kretzer (Kevin Bacon), has a ton of secrets hidden in that car. Secrets he'd be willing to do anything to cover up.

Not since Denis Villanueve's excellent Prisoners have I seen a thriller shot as gorgeously as this. Every single frame of film has been meticulously planned out, shot and executed on such an impressive level that even if some people walk away from Cop Car not liking the film in general, they can't say that it wasn't a gorgeous film to look at. Though I doubt anyone would walk away from this film not loving the shit out of it, because honestly, it's just insanely good.

Though the 2 main characters of the film are the two 12 year old kids who steal the car and decide to go joy riding, it's Kevin Bacon's Sheriff Kretzer (sporting a killer 'stache) who steals the show. Bacon is always great in anything he's in, whether it be an 80's dance movie, the villain in an X-Men film, or playing himself in Will & Grace. The guy never half-asses anything and that's all the more evident in his turn as a sadistic and evil Sheriff with secrets he'll do anything to keep hidden, including trying to kill 2 little boys. He's just pure evil here and it's one helluva performance. Wait till you see him hopped up on coke. It's too damn convincing.

What's almost fascinating about this film is how simple the story is, yet it's highly engaging 100% of the time. There's never a single dull moment, even when nothing particularly interesting is happening. It all flows rather well, culminating in a slow-burn style film that get's darker as the film progresses. Even though a lot is left to our imagination in terms backstory for everyone involved, each character is written so well and fleshed out enough that you care about them, or what happens to them, most importantly the 2 kids. You so believe that real kids this age would do the exact same thing, such as haphazardly handling a loaded gun, that you find yourself cringing often at what "might" happen.

Cop Car is a gem in the thriller genre; a gorgeous film with a stunning visual aesthetic and outstanding performances from everyone involved, including the severely underused Camryn Manheim. Jon Watts is a painfully talented filmmaker, and if Clown and Cop Car are any indication, he will be a big name to keep an eye on.
Posted by robotGEEK at 10:29 AM