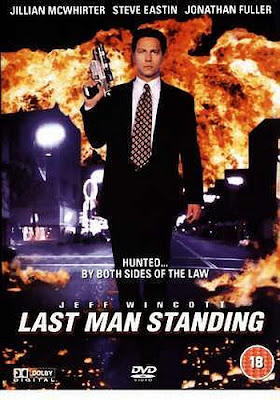 I believe it was through the excellent review site Comeuppance Reviews that I came across this film. Before then, I'd never heard of it. I'd heard of Jeff Wincott, but before this, I'd never taken the time to check out any of his films. And leave it to the badass brothers over at CR to keep me in the loop. If you want to know about action, the good ones, the bad ones, they're your guys.

When I read their review, I was sold. They couldn't praise it enough, and when they'res just way too many action films out there to choose from, I need some kind of guidance. So I took their cue, rented this from Amazon Streaming, and took a Sunday afternoon to devour this 90's bit of low-budget action with no interruptions.

The result was one of the most insane, most fun, and most badass low-budget action films I've ever seen. That's no lie. This move is nuts! And in the best possible way. Last Man Standing has everything you could ask for in an action movie. But wait, if you're into 90's action specifically, then you're in for a real treat. There's just nothing that compares to 90's low-budget action. There really isn't. 80's action more so than any other decade, which is why every now and then we get a "throwback" homage to remind us why we loved them in the first place, and to also remind us that they just don't make them like they used to. The same could be said about 90's action movies of course. There's just something about the way they made them back then. Handheld Shaky-cam was unheard of, and the filmmakers seemed to have bigger balls when it came to stuntwork and explosions. And most importantly, there were no lame-ass CGI explosions, gunfire, blood and the like. Which, as you may or may not know, is all too familiar in action films of the last 10 years. So when I find a 90's action-fest that gets it right like Last Man Standing, I'm all kinds of crazy excited. The last time I got this excited was when I saw T-Force and Hologram Man for the very first time, and Last Man Standing easily falls into the same category in terms of quality. Honestly, had I known how badass these films were by Merhi, I would have jumped on them years ago.

Writer/Producer/Director Joseph Merhi is big in the low-budget action world. Often working alongside Richard Pepin (T-Force, Hologram Man) - one of my favorite 90's action directors - as producers on each other's projects, he knocks out action films like nobody's business. In one single year alone, 1988 to be exact, he directed 8 films! Up until now I'd known about him, but had never seen any of his work. And Richard Pepin impressed me so much that I figured nobody could top him as an action director. But now, finally having seen one of Merhi's films as director, I put him right up there with Pepin. He doesn't just shoot anything half-assed. He makes the most of his limited budget with an insane amount of action that tops anything I've seen in any big budget action film of the last 10 years or so. And it's fun, a lot of fun, and even clever. There were things in here that obviously defied logic, or the laws of gravity, which I'd also never seen in any film before, yet looked so badass. You have to give it to the guy for being able to commit to all of this with a straight face, while also making it look slick.

Having someone as talented as Joseph Merhi behind the camera as a triple threat as writer/director/producer is all well and good, but you also  need someone who can lead the damn thing, a solid anchor who knows how to keep you invested, and that's where Jeff Wincott comes in. Much like Merhi, I'd never seen a film of this guys before, and how I went this long is beyond me. Not only is he a great martial artist who can hold his own in any fight, but the guy is an damn fine actor to boot, emitting charisma and a tough cool at the same time. I'm surprised he never made it into big budget action. He's got the goods.

Last Man Standing has everything you could possibly want in an over-the-top action film. On a technical level, it's damn impressive. The action sequences are some of the best I'd ever seen, coupled with Wincott's strong charisma in front of the camera, and an eclectic ensemble supporting cast, you have one helluva fun ride. Take the ride.