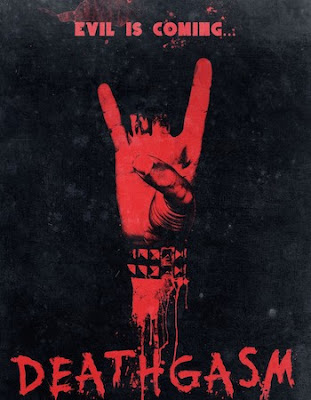 When the trailer for this starting hitting the net, followed by it's constant festival screenings, my enthusiasm had been growing and growing to a fever pitch. Just based on the insane trailer, I knew this would never get a theatrical run, meaning VOD would be the only way to see it. Then I had kind of forgotten about it since the VOD release date was so far in the future. Shockingly, this finally hit with little to no buzz just a few weeks ago. I had no idea, until someone randomly posted something about it. On a Saturday night I gathered as many of my movie buddies as I could, grabbed a whole lotta beer and hoped for the best.


Deathgasm was awesome. Plain and simple. It was everything we'd hoped for and then some. Combining heavy metal, horror, comedy, over-the-top gore, and likable characters, Deathgasm hits all the right notes resulting in one helluva good time, even if you're not a metal head. Though the story revolves around 2 metal heads who unwittingly summon a demon through a heavy metal song, you enjoying that particular genre of music is of little importance at determining your enjoyment with this. The entertainment factor is so high on this regardless of your specific taste in music. You do have to enjoy horror comedy though. So if films like Evil Dead 2, Brain Dead, Cooties and Shaun of the Dead are your thing, then Deathgasm will be right up your alley.

First time writer/director Jason Lei Howden, who primarily works in visual effects on the biggest of the big Hollywood films, turns out an epic film of metal, gore, laughs and death. The particular way he edits this film together keeps it from being monotonous, resulting in a fast pace that gets to the meat of the story rather quickly, while simultaneously giving us enough characterization from all involved to give them all strong standout personalities. It's clever writing, clever dialogue, and downright hilarious situations that gives Deathgasm the charm that easily makes it stand out from the pack. 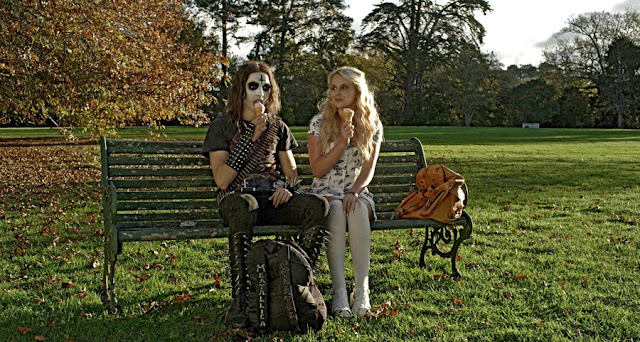 Easily one of the most enjoyable horror comedies I've seen in a while, and one of the most original, Deathgasm exudes a fun vibe that comes off as effortless. They simply do not make enough horror films with a Heavy Metal theme. Sure there are films like the awful Rock n Roll Nightmare and the uber excellent Trick or Treat, but they're so few and far between. Though this one's hilarious, it's a good feeling to have a new member of this exclusive club. Grab a few friends, crank up the speakers and give this excellent bit of Heavy Metal horror.
Posted by robotGEEK at 12:49 PM