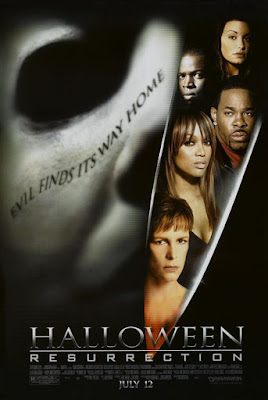 This was so bland, so dull, so cookie-cutter, and so generic that I couldn't even finish it. I made it about halfway through, and that's further than I thought I would get. I know the big deal was that they got Jamie Lee Curtis to return yet again for this entry, though thankfully she had the good sense to only stick around for the beginning. The other big deal was that original Halloween II director Rick Rosenthal was returning to the horror genre, and the Halloween franchise with this one. I have to give Rosenthal props for giving Halloween II some decent style, but that could simply be because it was the early 1980's. That was a long time ago; things looked different, equipment worked differently, and Cinema had an entirely different aesthetic in general. Looking back on his filmography, it seems that Halloween II was really just a fluke as most of his work seems to be in television. So was it more of a gimmick from the studio by bring in the director of one of the better liked Halloween films? A way to get older fans like myself interested in the idea of a new one, despite the fact that it starred Tyra Banks and Busta Rhymes of all people, and took the webcam idea and killed the Halloween franchise with it? Way to go.
Posted by robotGEEK at 1:37 PM