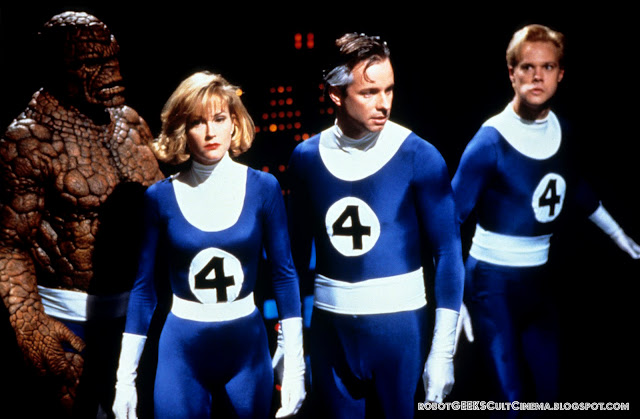 I'm sure by now we've all heard of this film right? Released in 1994 and produced by legendary schlock producer Roger Corman, the film was so bad that it was never released, neither by Corman himself or by Marvel. Sure you can see it now, but it'll only be bootleg copies that somehow made there way out into the masses, because we live in the day and age where it's just too easy for us to be able to access these things that we're not supposed to. And thank heavens that we can!

I've owned this film for a few years now on a DVD rip, but for the life of me I can't remember where I got it. But oddly enough, I do also remember coming across it at a mom and pop video store in Austin, TX a good 15 or so years ago, even though technically this was not supposed to be made available to the public. But anyway, this past Sunday afternoon I was looking for something to throw on that would possibly be Bad Movie Night worthy (I'm always on the hunt), so I finally decided to take a chance on this and hope for the best on a few different levels. One, that the copy would be at least watchable, knowing full well this could be a copy of a copy of a copy of a bootleg VHS. And secondly, that it would at least be something I could watch all the way through without having my brain melt in frustration. I'm happy to report that on both of these topics, Roger Corman's FF scored a solid "A".

Fantastic Four is a terrible movie. It's just completely awful. But the funny and surprising thing I found was that it was also oddly charming in it's own way. In fact, all I kept thinking about while I was watching this was how much I enjoyed it more than the two lame big budget Hollywood films we've gotten to date, with a third film (a reboot) on it's way any month now as of this post. But while nearly every single aspect of this production was severely lacking in nearly every department, it was highly enjoyable in a Bad Movie sort of way. We laughed hysterically from beginning to end for a number of reasons; the hilarious dialogue, the schlocky special effects, the weird music cue's, and most importantly - lack thereof, the truly bizarre subplot involving an elf and his gang that doesn't even belong in this film, the horribly miscast actors, Dr. Doom's hilariously over the top and completely hammy performance, and director Oley Sassone's flat out terrible and uninspired camera work. The Fantastic Four has it all, in both the worst and best possible way.

I loved this film, and had such a blast watching it that it's hard for me to hate on it for just being bad, when being so bad is the reason I loved it so much. Yes my friends, if you need a recommendation for Bad Movie Night with a bunch of friends, this film will surely fit the bill. It's definitely bad, yet in a highly entertaining way.

Oley Sassone is a terrible director. There's just no getting around that. While this isn't the only low-budget Marvel property out there, The Punisher (1989) and Captain America (1990) being the most notable, at least those films were made considerably well by low-budget standards. Big time Hollywood editor Mark Goldblatt took the directing reigns on The Punisher, and what resulted was a seriously killer piece of Badass Cinema. While I wouldn't call Goldblatt a stylish director, he certainly knows how and where to place a camera. The film looks good, and the amount of action and violence is insane, making it one helluva great film, regardless of the fact that Dolph Lundgren isn't wearing the Punisher costume. With Captain America, legendary Low-Budget director Albert Pyun (Cyborg, Nemesis), infused the film with a lot of style, but very little substance. Trying to play the film out more like a drama meant little action overall, but the action sequences that are there - namely the beginning and end - make the film for me and well worth the watch. I actually enjoy it quite a lot.

With FF, director Oley Sassone makes the film look cheap. There's no style, no tact, no creativity to any of it. Because of this, it constantly looks like a Made-for-TV movie, or worse yet, just an average episode of a random television show. I don't know what Corman was thinking by hiring this guy to direct a film like this, but it couldn't have been from anything he'd directed before. There's nothing in his filmography that would suggest that Sassone could be capable of handling such an important property like this. Furthermore, it's painfully apparent that this guy just can't handle effects. I personally feel, in my humble opinion, that with all that is wrong with this film, that if it had in the "least" been shot with some more visual pizzazz, it would have upgraded the quality of this significantly. Sure it's a fun watch, mostly due to the terribleness of it all, but with some visual eye candy, it could have really been something. The only thing I can gather is that Corman hired Sassone knowing full well that this film was never going to see the light of day anyway, but we'll get into more on that later. 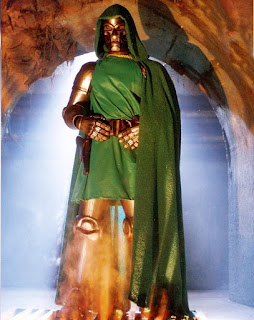 Despite it's many shortcomings, Corman and company did get a few things right, namely the costume and makeup design. They literally look like they jumped right out of the comic book, something that big budget studio films seem to not understand. Even getting down to The Thing and Dr. Doom's makeup, which is surprisingly spot-on and damn near impressive. If only the film had "looked" better, stylistically.

Ever since it's creation, and subsequent "un-release", it has always been available on bootleg VHS, sold primarily at conventions and the underground video circuit. It's from these bootleg VHS tapes that we have DVD rips, which have also been downloaded on torrent and streaming sites. So it's easily and readily available to watch should you choose to, but be warned, every version you find will all be from a bootleg VHS tape, and the quality shows. To date, there has never been a DVD press, so unless Roger Corman, or whoever holds the rights to this thing currently, decides to just say fuck it and release the thing to the home video collectors market, this is as good as we're gonna get.

Rumor has it that Roger Corman never intended to release this....ever. He had somehow acquired the rights to the FF property, and that hold was just about to expire. So instead of letting it go and falling into the hands of other filmmakers, he decided to do a quick cheap production to get something out of it before he lost control of the rights. That makes sense, but I'm still not clear on why he never intended to actually release it. Maybe that'll be cleared up in the new documentary Doomed! The Untold Story of Roger Corman's The Fantastic Four, set to make it's world premiere at this years San Diego Comic Con.

Over 20 years later, it's oddly charming in it's own unique way. There are things about it that surprised me, and there are things about it that drove me nuts. But all in all, it was a thoroughly enjoyable experience. I've said it before, and I'll say it again, while it's severely lacking, and often feels rushed and made up on the fly, I still found it more enjoyable than the 2 turds Hollywood has given us to date. Maybe there's something to be learned from all of this?
Posted by robotGEEK at 7:56 AM