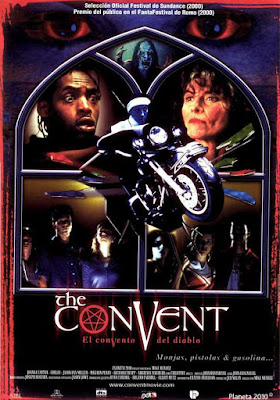 I recently happened upon this title while browsing a Facebook horror group I follow. The guy who made the post was basically saying how great it was, and how essentially it was a throwback to the 80's cheesy horror films we loved. It also boasts an interesting cast, with Adrienne Barbeau and Bill Moseley providing key supporting roles. How have I not heard of this before?

Directed by Mike Mendez (Big Ass Spider!), the biggest inspiration for The Convent is Night of the Demons. In fact, one could argue that it's nearly identical, or close enough to be called a remake. Except Mendez and writer/actress Chaton Anderson seem to be purposely be going for the over-the-top silly/cheese factor. While Night of the Demons could certainly be called cheesy, that's more an example of it's time, whereas Convent is all done on purpose, right down to the extravagant colors used throughout, and the bright neon colored gore and black lighting only add to the "camp" factor. And its' definitely campy.

I don't know, I'm sure there was a good movie in here somewhere, but Mendez is not a strong director, and it's because of this that The Convent doesn't quite live up to the excellent concept. All the ingredients are here; decent cast, decent effects, killer opening, and a slightly quirky take on the "possessed demon" concept, but Mike Mendez unfortunately drops the ball on a number of occasions, leaving us a little underwhelmed by it's low-budget quality. It was a fun watch for sure, but it could have been so much better had it not looked and felt so amateurish. Many scenes, and entire sequences in fact, felt like they lost all of their impact due to it's far-reaching silliness. While I get they were going for silly 80's at times, and scary at others, it just doesn't flow very well, leaving a bad taste in your mouth. 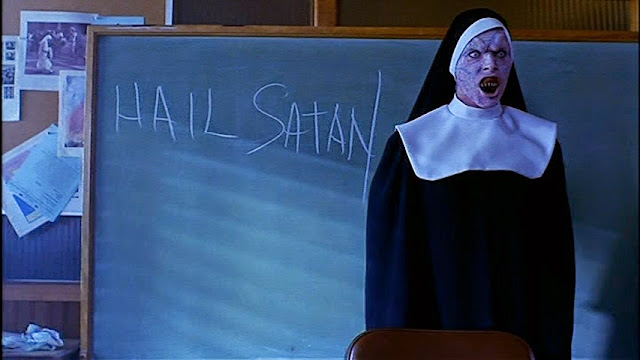 The production and budget, believe it or not, was actually halfway decent, with the exception of the minimal hokey CGI effects shot here and there, but when it came down to practical makeup and effects, I really didn't have any complaints in that department. In fact, one of the things I found sort of refreshing is the fact that when the characters went full on "possessed demon", Mendez used bright neon colored makeup illuminated by black lights, which gave it a unique spin on these sometimes tired sequences. Yet, the lame and uninspired hand-held camerawork left a lot to be desired. It's these little technical aspects that bog down what could have been a really well made and fun horror throwback experience.

There are parts of The Convent that work, namely seeing a badass Adrienne Barbeau steal the show and kick all kinds of ass, but there are things about this that frustrate you in it's less than impressive approach. Personally, I liked the idea of a Night of the Demons clone, and the stylistic choices presented throughout such as the bright neon colors and cheesy CGI, coupled with a good cast and decent makeup effects make this totally passable. I just didn't care too much for how Mike Mendez conveyed all of these things with an amateurish aesthetic. It could have been so much better.

* If you want to check this out, it's currently streaming on HuluPlus.
Posted by robotGEEK at 10:50 AM