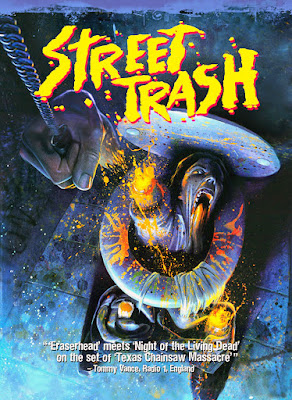 This was one of those low-budget horror films I remember seeing often on the shelves of my local mom and pop video store. I doubt a big company like blockbuster would carry this, but I could be wrong. But I remember specifically seeing this amazing cover on numerous occassions as a youngster. I assume I wasn't allowed to rent it on my own as it's Rated R, and I was much too young, but I always wondered. Funny how that wonderment never pushed me to seek it out in my adult years. While the cover art always stuck with me, I never felt the need to seek it out. But I always assumed it would be great, or in the least, live up to the promise of that killer cover art.

On a random night last week, 4 of us sat down to enjoy what we hoped would be an epic low-budget splatter-fest, filled with insane practical gooey effects in all their glory. When it was over, all 4 of us left the film confused, and completely disappointed. What we assumed would be a horror film, ended up being something of a strange story about a former Vietnam vet who's now a homeless schizophrenic who is the self-imposed leader of a homeless camp ruling his authority with an iron fist, dispersing pain and punishment however he see's fit. Except, the film begins with a greedy liquor store owner who discovers a hidden box in his basement filled with a drink called "Viper". He decides to sell this drink to the bums who frequent his store at $1 a pop just to get rid of it and make a quick buck. However, when ingesting this Viper, you quickly begin melting from the inside out, and it's contagious. If any of this gooey ooze touches you, you're soon to melt into a pool of goo yourself. Great start, with an equally satisfying finale, but holy shit does this think seriously tank and take a severe nose dive for an entire hour in the middle with this Vietnam vet storyline that goes nowhere and has nothing to do with "Viper". It's like a totally different movie! It's never mentioned, and there are no killer effects work that impressed us so much in the beginning of the film.

For an entire hour you keep waiting and waiting for things to pick up, or to somehow involve the Viper drink that started the film, but no. It's a strange sometimes surreal film about a bunch of homeless people living in fear of this guy who's delusional, and then somehow brings in another story about two of these homeless guys who are brothers who are having a hard time getting along. Then, out of the blue the "Viper" storyline and the "Vietnam homeless vet" storyline come together in the end in the strangest way, culminating "finally" into some crazy gore and effects that we had been waiting an entire hour for. And by that time, it's not nearly enough to save this mess of a movie. You've practically given up by then.

When it was over, we did comment on how that we did enjoy it as a "weird film", but not an "entertaining" one. We were confused, bored, surprised at the great effects work (when provided - which was seldom), and impressed at how well Jim Muro shot it on a shoestring budget. But ultimately, we were unsatisfied and Street Trash was not the film we were hoping for. Here's to being thankful that I didn't actually buy this thing or seek out that special Limited Edition VHS that's nearing it's release.
Posted by robotGEEK at 9:22 AM