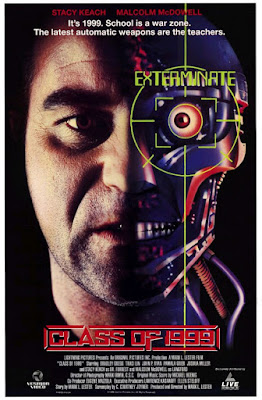 Forward: Gosh, I really feel like I've been slacking these past few weeks. What began as a daily onslaught of reviews and inspiration has quickly fallen to a few posts here and there recently. I've learned in the last 10 years that when I get into something, I tend to become obsessive. So I suppose you can say I've had an undiagnosed OCD thing and it's taken me nearly 40 years to realize this. LOL. So these past few weeks my focus has been on VHS collecting. I apologize, and with things getting somewhat back to normal, I'll try to get these out more quickly.

Though I still to this day have not yet seen the original film in this series, Class of 1984, Class of 1999 was a staple of my viewing experience as a teen in the 90's. I loved it, and remember wearing out my VHS of this to the point of unwatchable. I always knew that it was from the same guy who directed Commando, another staple of my 80's and 90's viewing experience, and that it was a Direct to Video release, but man, I loved the shit out of this film.

What's funny to see now is that back when I first saw it, 1999 was the future, but now we're a good 16 years later and 1999 never turned out to be the way it was portrayed in the film, as is "always" the case isn't it? But I honestly forgot about this film until recently. When a fellow filmgeek casually mentioned it, it immediately set off a barrage of images from the film that I had totally forgotten about. As luck would have it, it was on YouTube, and in widescreen. Score!

Mark L. Lester's Class of 1999 is undoubtedly one of the most underrated sequels out there. Not only that, it's always surprising to hear that whenever I discuss it or bring it up to anyone, they're completely unaware it's a sequel. But I guess that's also a testament to how good it is, that it's able to stand on it's own without any real connection to the first film. What also blew me away was how damn near impressive this killer cast is. A virtual smorgasbord of familiar faces from nearly every genre rooted deep in the 80's, it's almost like a game of "Name That Face and Movie". For starters, we've got Stacey Keach and Malcolm McDowell; no introduction needed on them. But then we've got the three new teachers assigned to the school, and they're none other than Pam Grier (yes, "that" Pam Grier), Patrick Kilpatrick (a regular baddie), and John P. Ryan. If you don't know they're names, you'll most certainly know their faces. But then we've got Bradley Gregg (A Nightmare on Elm Street 3), Tracy Lind (Fright Night Part 2), and Joshua John Miller, that annoying little kid that always seems to pop up everywhere. But you'll mostly remember him from the annoying vampire in Near Dark, or the annoying little brother in Teen Witch. But there's more, a lot more. I often caught myself mumbling "He's in this?", or "Him too?!". It's pretty fun.

When 3 new teachers are brought into a new school overrun with chaos, they seem to be able to bring the chaos under control. But when they begin to go too far, some of the students begin questioning what these new teachers really are. When they discover that they're actually robots as part of a new government program, it's an all-out war between students and teachers.

The film starts off rather predictably, but not any less enjoyable. By the halfway mark though, it takes a considerable shift in tone and turns more into an all out sci-fi/action flick, complete with old school robot animatronics, lots of explosions, deaths, gun battles and impressive stuntwork. Looking back on it now, it has aged rather well, with the depiction of the punks via the future in 1999 not being that far off, surprisingly. Costume design aside, everything in this film comes together so well, culminating in a killer finale, making this easily one of the most enjoyable low-budget action/sci-fi flicks out there.

A lot of this film's success can be traced down and attributed to director Mark L. Lester. The guy has been making films for decades, in nearly every genre, and while action seems to be the one he's most comfortable with, and with which his most memorable films can fall under, when he's firing on all cylinders, he can deliver some really fun stuff. Class of 1999 is a perfect example.

With classics like the original Class of 1984, Firestarter, Commando, Armed & Dangerous and a personal favorite of mine, Showdown in Little Tokyo, under his belt, Lester has proven a formidable force in films, most notably the action genre. But while the 80's was his most respected output, after the Lundgren/Brandon Lee Showdown in Little Tokyo, he seems to have made the DTV market his home, where he still directs and produces films to this day. Unfortunately none of his output in the last 20 years is honestly very good, or hold a candle to his previous work, but I'm always hoping he'll be given that one last project where he can shine, and show us some of that spark he once had as a talented action filmmaker.

Class of 1999 is easily available on multiple formats, most notably on DVD singly, or as part of a horror pack. If you get the horror pack where this is included, be warned, as it's in full frame. If you pick up the single DVD, it'll be in widescreen, but with a really lame cover, and not the cover we grew up with on VHS. Either way, it's worth tracking down, and it's a helluva fun time.
Posted by robotGEEK at 1:43 PM