Review: Best of the Best 2 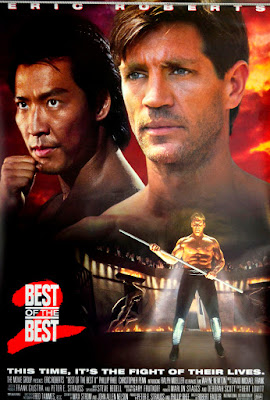 I always remembered liking this action/martial arts sequel to the equally great Best of the Best. But even going back to when I was younger and very much into these films as a teenager, I always remember liking this one much more. It seemed like the team behind the first film knew they had a good property on their hands and went all out when it came time to do a sequel. And when it comes to Best of the Best 2, boy did they ever.

Picking up right after the events of the first film, most of the principal players have returned, as well as director Robert Radler, and the result is nothing short of 100% Badass Cinema. While the first film was more of a martial arts/drama in the form of a competition film, this sequel goes straight for the "awesome" and ramps up everything considerably, giving us a lot more action, a lot more violence, and a lot more fighting. Best of the Best 2 is what sequels should be about, taking everything that made the first film so good and dialing it up to 10. Except in this case, they didn't do that. Instead they went up to 15!

When their friend Travis (Chris Penn) is killed in an underground Las Vegas fighting ring run by a ruthless show promoter (Wayne Newton), it's up to Alex (Eric Roberts) and Tommy (Phillip Rhee) to find out who's responsible. When they discover that fighter responsible is Brakus (Ralf Moeller) the current ruler of the ring, they band together to take him down once and for all with the help of Tommy's brother (Sonny Landham).

I really can't say enough great things about this killer sequel. Everything you could possibly want in an action sequel is here, and it's just so much damn fun. Being a 90's action film, you can bet your ass there's a training montage cue'd to some cheesy rock music. Yes! It's overall aesthetic just screams 90's action nostalgia, made all the more awesome by it's supporting cast of character actors that have played nothing but bad guys all throughout the 80's and 90's. You may not know all of their names, but you'll certainly recognize their faces. But even aside from the regular set of baddies, you've got Meg Foster, Kane Hodder, Patrick Kilpatrick, Nicholas Worth, Sonny Landham, and the list goes on and on. The cast in this is amazing! 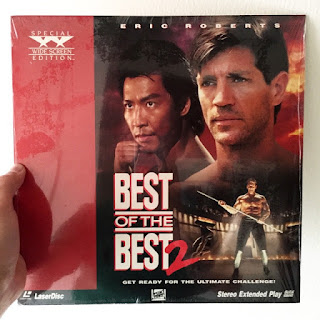 Recently a film buddy of mine online had mentioned how he was watching the first one, and I mentioned how this sequel is so much better in a different way. So he threw it on and agreed. But that got me to thinking and realizing that it had been ages since I'd actually seen it myself. Doing some digging online for the DVD I discovered that the DVD typically goes for around $20 on up, depending on the seller. And as easy as it could have been to just snag the VHS for cheap, I really wanted to see this in widescreen. As luck would have it, a day or so later I just happened to be casually browsing the Laserdisc selection on eBay and wouldn't you know it? Best of the Best 2 on Laserdisc was the first one to pop up, in Widescreen no less! $7 and several days later and it was in my hands. I love it when the universe works in my favor like that.
Posted by robotGEEK at 2:00 PM