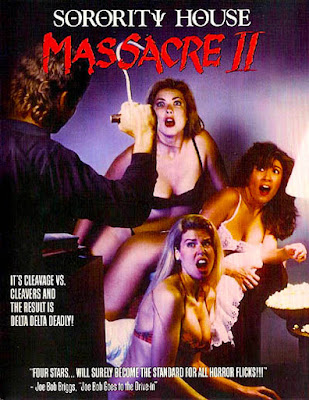 When I recently saw the excellent Hard to Die, it was only afterwards that I learned it was technically Sorority House Massacre 3. But since it didn't take place in a sorority house, they changed the name as to not confuse the general public. So after learning that Jim Wynorski not only directed both Sorority House Massacre 2 and 3, but that he made them both in the same year, I was ecstatic! So you can bet your ass I set about getting my hands on Part 2. But of course, as with most of Wynorski's earlier films, that's easier said than done. The Sorority House Massacre franchise is a hard one to get your hands on cheaply. There are various releases on Blu-ray, DVD and VHS, even a DVD set containing all 3 films, but they're not cheap, with Part 3 aka Hard to Die being the hardest one to track down. Surprisingly, I lucked out finding a VHS on Amazon for under $10 including shipping.

A good 10 minutes into this film and something was painfully apparent; Hard to Die is virtually a scene for scene remake of Sorority House Massacre 2, which is surprising for a number of reasons, the first being that both films were made by the same director in the same year. Yea, try wrapping your brain around that one for a little bit. What was more shocking is that entire lines of dialogue, situations, sequences and hell, the damn storyline are carbon copies of everything that happens in Hard to Die, just set in a sorority house rather than a high rise building.

But here's the thing. If you haven't seen Hard to Die, SHM2 is damn entertaining. It's low-budget horror sleaze at it's best; absolutely. But if you've already seen Hard to Die, there's no denying that Hard to Die is the much stronger and better film. I don't know why they decided to remake SHM2 and reset it in a high rise building for Hard to Die, but it seems that everyone on board (most of the cast and crew returned for Part 3 aka Hard to Die) has upped the anty and their game considerably for the 3rd round. Even though it's the same story, same lines of dialogue, and same characters, the third film takes everything a step further into the absurd, ridiculous, hilarious and entertaining; making for a much better film altogether.

But back to SHM2. A group of college girls move into the delapidated and rundown sorority house made famous by the murders of all the previous tenants years before. They immediately are confronted by their odd neighbor Orville Ketchum, and he tells them about what happened to the previous tenants in the same flashback that's used in Part 3, but whatever. Immediately soon after, they begin experiencing strange things, and they soon suffer the fate of the previous tenants one by one.

What follows is a surprisingly short running time of just an hour and 15 minutes of endless gratuitous nudity, laughably low-budget amateurish kills and a story and plot so razor thin, you could cut a diamond on it; all the things that make this specific type of film so damn fun and entertaining, a staple of Wynorski's early film career. Let me also point out something that is also quite silly - the cover. First of all, none of those women are actually in this film. And that's not the killer. So much like the trend that prevailed in the 80's where the poster artwork was made before the film itself, it seems the distributor decided to continue the trend going into the 90's. While the theme of the cover is accurate, it's just funny how none of the people depicted on it are actually in this film. Good stuff.

It's hard to figure out what Wynorski was thinking when he made this, and then decided to remake the same film in the same year. With this film in particular, he seems to just be going through the motions. It feels rushed, and oftentimes lacking any of the character that makes most of his earlier films so great. But then again, I don't know what the circumstances were making this. If IMDB is to be believed, this was written and shot in 7 days. After seeing this, you would definitely believe that. While entertaining through and through, it looks and feels like a film conceived and shot in 7 days. One thing's for certain, everything lacking in this film in terms of charm, structure, coherence, effects, violence and entertainment value is impressively displayed in the third entry Hard to Die. But don't be discouraged. SHM2 is ludicrous, sleazy fun and you won't be disappointed. This film is why the VHS era was so great.
Posted by robotGEEK at 10:36 AM