Digging up the Marrow 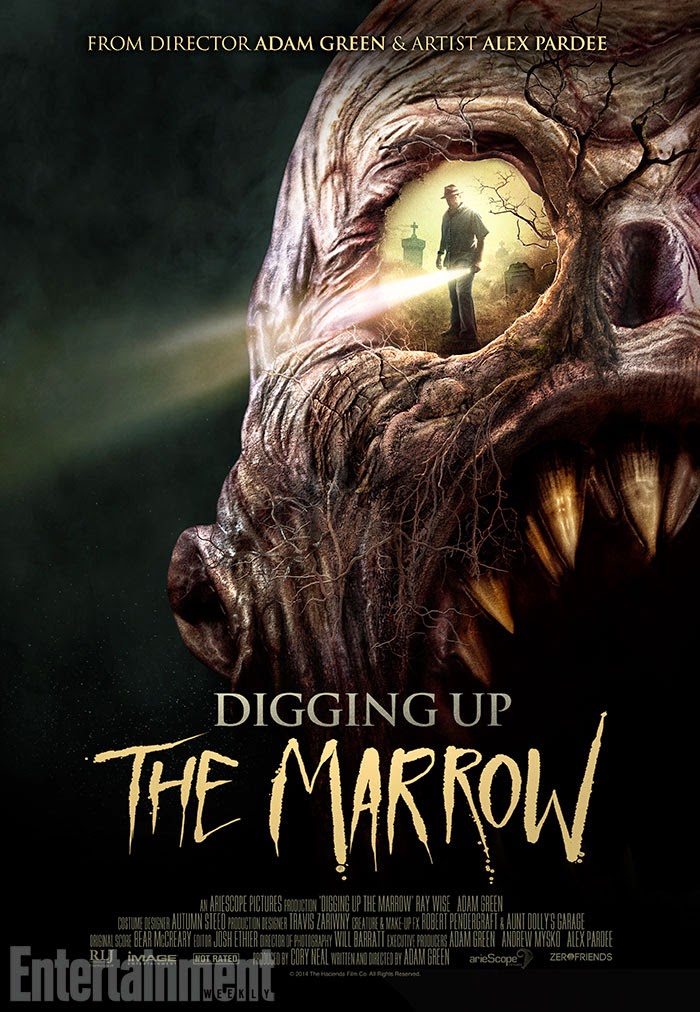 I'll admit, I'm late to the Adam Green loving game. I only recently discovered his Hatchet series this past year, and when I saw the first one, I was immediately in love with the character, the film, and it's execution. You see, Adam Green is a filmmaker who worships horror films. He grew up on them, and holds a deep love and respect for how they were made back in the 80's, when things were done in a completely different way than they are now. His insistence on practical effects and NO CGI is part of the reason why the Hatchet films, of which there are 3 to date, are so good and successful. Needless to say, anytime a new project comes up with Adam Green's name attached to it, you can bet I get excited.

I knew very little about Digging Up the Marrow going in. I knew it was his first full length project as director since Hatchet 2 way back in 2010, and that it was somehow about monsters, but that was it. I didn't know who was in it, or what the exact details of the story was about. It was also surprisingly hush hush. I rarely saw anything about it in any of the horror sites and blogs I follow, so I wasn't even sure when or if it would ever come out. So when it recently hit VOD just this past week, to me it seemed like it came out of nowhere. While it was a little pricier than what I'm used to paying for VOD films, I felt it was a good chance to pay my part and help support independent films and their filmmakers, rather than going another route.

Digging Up the Marrow is a breath of fresh air for many reasons. Here, he takes the faux documentary approach, and infuses it with the Found Footage genre, but only slightly. Without giving too much away, I'll just say that he did his homework, and figured out what works and what doesn't work in these specific over-saturated sub-genre's, and his execution is pretty solid. While not his strongest film to date (that would be the first Hatchet), it's up there pretty high.

Not only does Green write and direct, he also stars in this as himself. While hard at work on his series Holliston, Green is contacted by a retired detective who believes monsters are real, and he knows just where they hide. Intrigued and fascinated by this idea, Green and his cameraman/friend Will Barratt head out to meet this mysterious man feeling that if anything, this would make a great story. Green and Barratt soon discover that they're in for more than they bargained for.

Digging Up the Marrow has a lot going for it, most notably the decision to cast Ray Wise in the lead. I mean, we all love him right? He's just fantastic, more so when he's in crazy mode. And here, he doesn't disappoint. Why doesn't Wise star in more films? It's a travesty I tell you.

I think it's best I leave it at this. If you love horror films, and the horror genre, you won't be disappointed with this film. It's sort of a love letter to monsters, and Adam Green's passion for all things horror is clearly evident in every bit of this film.
Posted by robotGEEK at 10:28 AM