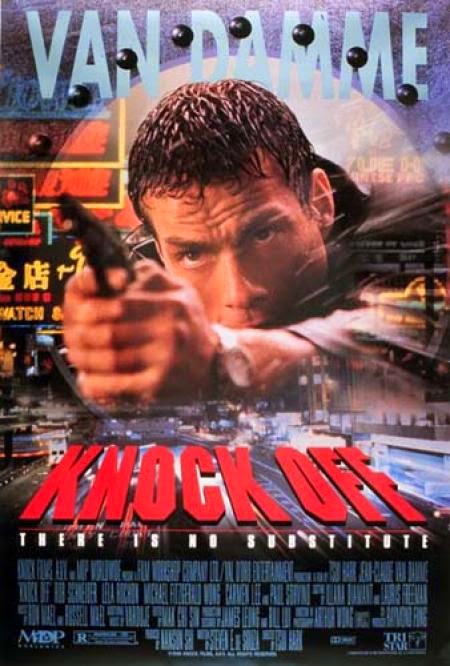 Wow. I don't even know where to begin with this one. I guess I should start by saying that Knockoff is a complete mess. It's not often that a movie is so terrible that I can't even finish it, but that's exactly what happened with this one. Mind you, I love bad movies, but this one falls under that rare little niche where it's just flat-out bad in a very unentertaining way. I have no idea what Van Damme or director Tsui Hark had in mind or what they were going for when they set out to make this, but just judging from the 45 minutes or so I sat through, I couldn't tell. The vibe, aesthetic and tone is just all over the place. Sometimes it's hardcore action, sometimes it's a silly comedy, sometimes it's serious. It just never stayed in one single category, which ultimately is it's biggest failing, among many others.

Knockoff was one of those Van Damme films I never got around to for some reason. This was right before his films began going straight to video, and even though I was still a Van Damme fan at this point, his star power was seriously waning with some less than stellar films performing poorly at the box office. Though his idea to bring John Woo from Hong Kong to the US to direct Hard Target was flat out brilliant, the same idea didn't fare so well when he brought other legendary HK directors like Ringo Lam and Tsui Hark to direct a few of his other films after. It's a great idea, and honestly, these guys have turned out some stellar work in their respective homeland, but unfortunately that talent didn't translate over to the US very well, not in these instances anyway. Lam is a very bland director in my opinion, and Hark can do some impressive work, but also has a tendency to go all out crazy, with no real style or substance that you could easily define. And that's exactly what he did with Knockoff.

When I threw this on, my radar went berserk when I saw Rob Schneider's name in the opening credits. I'm sure in the real world he's an alright guy, but in films, he annoys the fuck out of me. Aside from the fact that Judge Dredd is not in uniform for the majority of the film, Schneider's casting in that 1995 film is also one of it's biggest flaws, but I still love it regardless.

Knockoff starts off promising enough with a fast paced and kinetic action sequence in the ocean. So my expectations were realized, but only for a brief moment. Immediately after, everything just falls apart. We're all aware that by this point Van Damme was knee deep into his drug addiction, which is clearly evident in the dull as hell Maximum Risk. But he's not even the problem here. He actually looks more lively than I'd seen him in years. I think the issues lie squarely on director Tsui Hark's shoulders this time around. The film is a glorified mess from the very beginning. While there was some cool stuntwork going on, it's all just so uninspired and hyper-kinetic that I found it headache-inducing. Then Rob Schneider's annoying comic relief sidekick character shows up and it gets even worse. The guy has somehow made a name for himself by randomly showing up in action flicks as the comic relief. How? Why? Then Lela Rochon shows up as some kind of federal agent and she's just completely 100% out of place in this film, not to mention she's just flat out terrible in this and totally unbelievable. And I haven't even gotten to Tsui Hark's continuous odd camera placements that make no sense. I'm telling you, this film is flat out terrible and I found no redeeming quality in it.