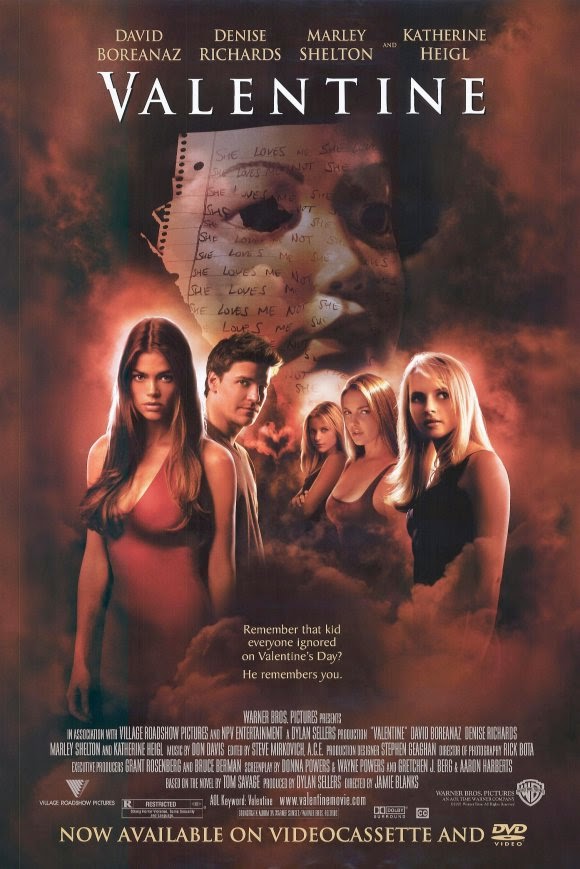 These are the types of horror films that I avoid like the plague. Basically, anything from the 90's and 2000's starring a "group" of hot "not normal" looking young stars in what can only be described as an "attempt" at a modern day slasher. The last 25 years or so were full of them. Urban Legend, I Know What You Did Last Summer, yadda yadda yadda. This was one of them, and until recently, had no desire to ever see it. I mean, just look at that cover. Everything about that cover is everything I don't like about these lame attempts at slasher films. Yet, this popped up on the excellent horror doc "The 50 Best Horror Films You Haven't Seen", and also, not surprisingly, it was highly recommended on Valentines Day no less. A few of my Instagram friends highly recommended it as well, so I figured there must be something to it.

Valentine was terrible. It was just as bad as I had always expected it to be, and even though my hopes were slightly raised after so many said to give it a shot, I was severely disappointed pretty much right from the beginning. Almost everything about Valentine is why I don't like these films in the first place. Nothing works here, and it's about as unoriginal as you could ever possibly imagine. Wooden acting, terrible dialogue, excruciatingly slow pace, uninspired kills, bland direction; in other words, tame, boring, and dull. I even tried looking at this from different angles, thinking maybe I'm just not in the right frame of mind, but none of that helped. It's a terrible film plain and simple. I honestly have no idea why it has the status that it does, or why anyone would ever recommend someone to waste an hour and a half of their life on this. I would never subject someone to this type of torture. So if you haven't seen it yet, be thankful, and just leave it at that.
Posted by robotGEEK at 12:15 PM