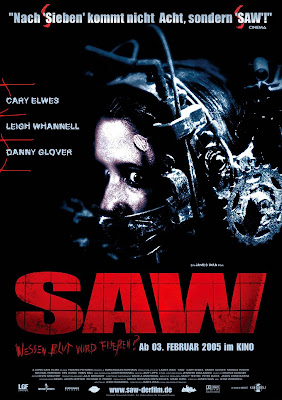 I think most of you will be surprised to learn that I've never actually seen any of the Saw films before. Well, that's not true. I had only seen this film once before, and honestly couldn't remember much about it other than the basic storyline. When I look back on it, I find it almost shocking to realize that James Wan is half responsible for creating the Torture Porn sub-genre. Why? Well because he's been more known for making spooky ghost stories more than anything. I'm not sure if co-writer/director James Wan (Insidious, The Conjuring) and co-writer/actor Leigh Whannell had their sights set on a franchise right from the get-go, but with a limited budget and some sheer raw talent, they ultimately created one of the most successful horror franchises in film history, in a time when the genre was saturated with tired formulas and weak uninspired slasher sequels that couldn't hold a torch to anything produced in the 80's. But then Saw comes along, seemingly out of nowhere, and creates a totally new horror icon, a new sub-genre, and most importantly, the need for horror fans to get their asses back into those theater seats.

It's been 10 years since this films original release, and while this new genre of horror or these films in particular are nothing to get excited about anymore, October of 2004 was a totally different story. While the films (7 as of this date) have changed dramatically in tone and substance since it's original inception, the core of the story and the mythology is here in the first one, just not over the top and in your face like the rest of them have grown to be. Being as I'd never gotten around to watching these, when Lionsgate recently released the entire set in a rather cheap Blu-ray set (3 films per disc?), I thought it would be the perfect opportunity to finally do so.

Saw was surprising to me for a number of different reasons. First off, it's strikingly apparent that James Wan has grown considerably as a visual director since this film (his 2nd as director). While most of it is decent, a few amateurish sequences (like the car sequence) here and there surprised me quite a bit. But that's really just nitpicking, because overall, it was a solid effort. 3 years later he would give us Dead Silence, his most visually impressive film to date, and I wonder if that has more to do with him or his DoP? In either case, while not terribly inventive in the visual department, he tries his best to give it a Seven vibe; dark and gritty. The problem is that it's just not always successful. I was also surprised to see that the gore content was considerably lower than what I was expecting, and the kills, which the franchise in general has been known for, were few and far between. I guess the history and reputation of this series had me expecting something grande, but again, it's just nitpicking on my part. I don't know if writer/actor/co-creator Leigh Whannell already had the vision of the franchise set in his head or not at this point, but I never would have guessed the direction it would eventually take simply based on this film alone. With that being said, it's an impressive start, and a good standalone film in it's own right. Dark, gritty, violent (at times) with both a shocking and satisfying conclusion. It takes it's time setting things up, and it's more concerned with telling a fleshed out story rather than shocking you with it's gore content, which is where I think the series eventually leads to.

One of the things I found that helped the film was it's low budget. Being under the constraints of a limited budget allowed Wan and his crew to experiment with different ideas and technical know-how to produce something creative and unique. Most of the film takes place in a single room, which you'd think would be difficult to keep interesting, yet they find a way by changing up styles and frequently keeping things tight. The constant sense of claustrophobia lends itself to a constant uneasiness that keeps driving the film forward to it's dramatic conclusion. Not a bad start for a young filmmaker who'd only had one other film released before this. I should also add that Charlie Clouser's riveting and catchy score only adds to the films overall intense vibe, and Saw is all the better for it. It's a great theme and one that I hope continues on through the subsequent films.

I'm not going to say that I loved it, but I'm glad I saw it. I feel it's a start if I'm to try and understand the appeal of this long running series that seemed to knock them out literally every year. Now on to Part 2! To be continued...