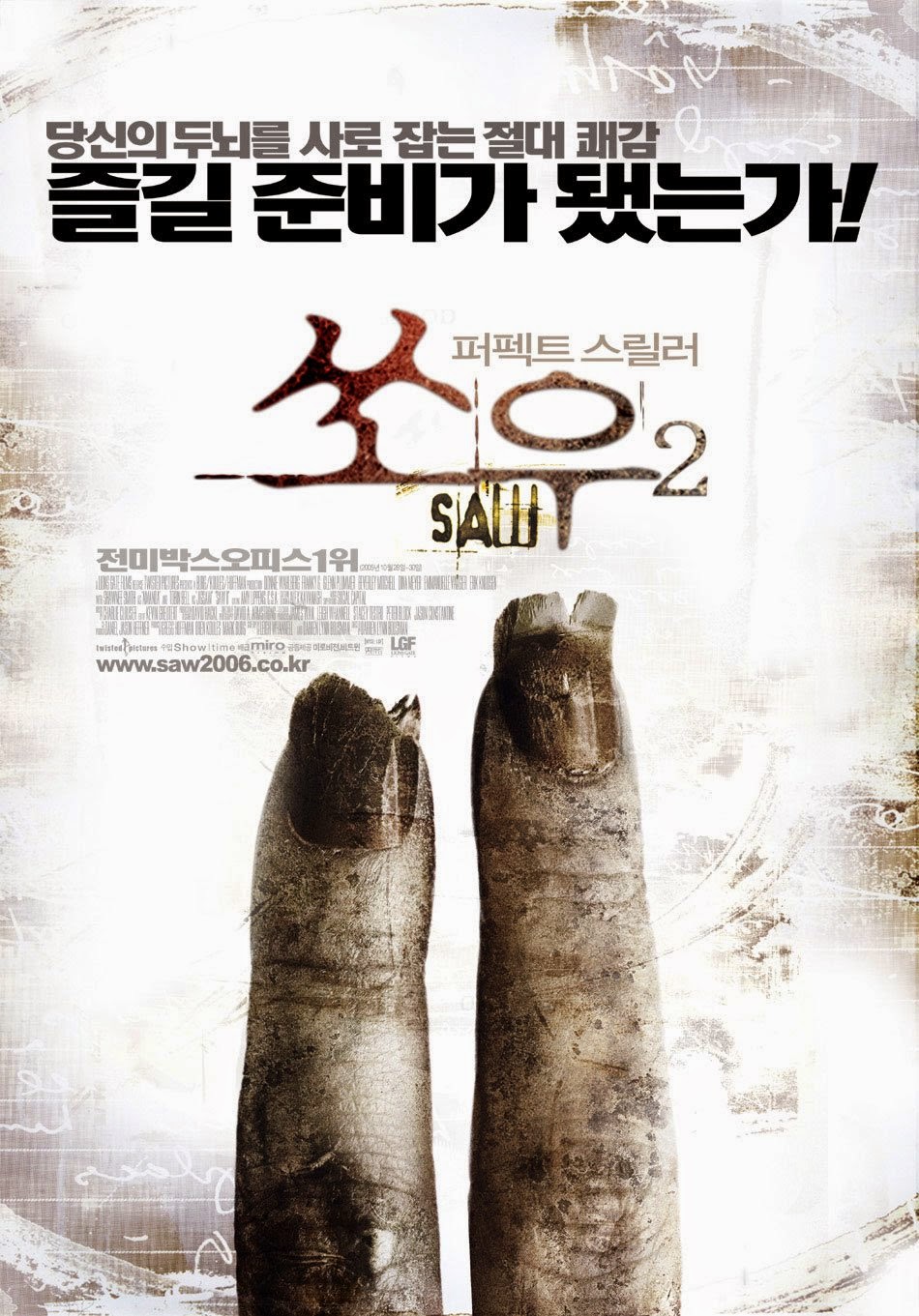 Released just a year after the original, Darren Lynn Bousman takes over directing duties this time out, with Leigh Whannell again returning as co-writer (along with Bousman), and begins to resemble more of the type of film the franchise is known for. Instead of just 2 people like in the first film, this time out a whole group of unwitting participants are forced to endure a series of unimaginable tests and traps, with each character having a common link.

I rather enjoyed this film a lot more than the first one. Though Bousman's direction isn't any stronger than James Wan's in the original, there are a lot more kills, gore, and all around it's a better film because it's the start of what the franchise is to become and what it's known for. Structurally, it's a bit different than the first film; a welcome change in my opinion. This entry also has the added benefit of having Donnie Wahlberg (The best thing about Dead Silence) playing another cop, though a completely different type than his role in that film. Wouldn't it have been amazing if it was the same cheesy character from Dead Silence?! But his addition to the cast is a welcome surprise because he's definitely a better actor than most people give him credit for.

There's nothing terribly interesting in this entry, other than the more elaborate kills and torture devices. So in that department, I guess you can say it's a bit more original. But as I look back on it, I can't really think of a single scene that really stood out more than any of the others. Perhaps the pit needle scene? There are more cringe-inducing scenes for sure, but none that really make this stand out in my book. One of the added benefits this time around is that it's a much faster pace than the first one. Instead of building up to a conclusion, this entry basically throws you into the story right in the beginning and it's essentially a series of traps and set-ups for every character forced to participate, while simultaneously try to figure out what the common link they all share is. It's breakneck pace is refreshing though, for that I give them props.

Overall a refreshing addition to the franchise for a number of reasons; Wahlberg's character being incorporated into the storyline, some fresh inventive kills, a faster more hectic pace, and the gore department delivers the goods. I liked it more than I was expecting to, and coupled with Darren Lynn Bousman's "safe" direction, Saw II ultimately plays out like a solid horror film, the kind I was hoping for. On that note, it delivers the goods. Unfortunately I'm finding it hard to get excited about it or to be enthusiastic with this review. I liked it, but nothing about it really got me pumped up. I definitely enjoyed it more than the first one, with the effects and gore department delivering some outstanding work. But it just didn't blow me away. Overall a solid torture porn film where the participants make the stupidest decisions imaginable, much to both our delight and frustration, Saw II elevates all the ideas and concepts conceived in the first film and dials it up several notches. Now on to Saw III!
To be continued...
Posted by robotGEEK at 9:52 AM