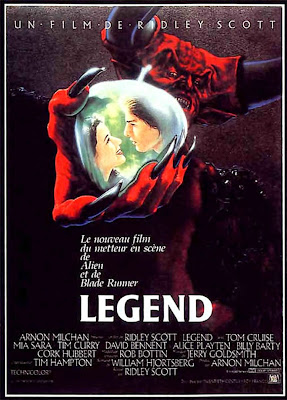 I have fond memories of being enamored by this fantasy film going back to my mid teen's when this first came out. The design, the look, the lush visuals, and most of all, fucking Tim Curry's knockout performance as Darkness. Funny thing though is that I don't actually remember if it was a good movie or not, just that the design of the whole thing always impressed the hell out of me.

Somehow in some way this film popped inside my head recently and I realized that it had been ages since I revisited it. Without a moments hesitation I got online and snagged the Ultimate Edition, which includes both the Theatrical Cut with the Tangerine Dream score, and the Director's Cut, which includes about 8 minutes of new footage as well as re-inserting Jerry Goldsmith's original score. Of course I went straight with the Director's Cut in my first outing, with plans to revisit the Theatrical version shortly. I was curious to see if this new version would be so dramatically different that I'll have a greater appreciation for it, or if my feelings would generally remain the same.

Essentially, my feelings remain the same. The Director's Cut, with added footage and a different, more magical score than what I was used to, didn't really bring anything new to the experience for me. There's a lot to love aesthetically about Legend; the set design, Scott's brilliant visuals, Rob Bottin's stunning makeup work - especially when it comes to Darkness - basically the whole production. That's what people have and will always walk away from with Legend. But Legend is definitely lacking in several departments that hinder it's ability to become just flat out awesome. I was gonna use Legendary, but the fact of the matter is that it is indeed legendary. Though a box office dud during it's initial theatrical run, it's certainly amassed a healthy cult status since and remains one of the most visually impressive fantasy films ever made. But it's not without it's problems.

Both versions of the film suffer from the same issues, too dull for the majority of the running time, and not nearly enough action/adventure or excitement as there should be. Sure it's a fantasy/fable, but you've also got to keep us invested and entertained, especially when it's nearly impossible to understand what any of the actors are saying, other than Cruise, Mia Sara and Tim Curry, without using subtitles due to the specific way the elves and fairies speak. So much of the film relies on visuals that they often forget to keep things exciting. It's pretty to look at, sure, but when it's an endless trek for the protagonist (Tom Cruise) as he searches for his love, along with his elf friends, you're kind of left just waiting and waiting for Darkness to show up, which he does, but not until the very last 30 minutes! Then the film resembles more of what you expect going in in the first place. But having to sit through an entire hour of whimsical just to get to 30 minutes of awesome is a little bothersome.

Of course, it's with these last 30 minutes where Legend really shines, and it's what most will remember. Darkness is front and center, and Ridley Scott's visual flair is on full display. Everything about this third act, except maybe for Darkness's flimsy horns while he's running, are expertly executed for a more darker and sinister finale. This is what I'm sure everyone was hoping for in terms of how Legend would play out. Too bad it's not until the very end. In an interview contained in the special features, Scott himself has gone on record as saying that there were a few things he would change given the chance, like adding more action and adventure into the story, and not succumbing to pressure by severely cutting it down from his original vision. Apparently, a stoned moviegoer at a screening that Scott also attended made a few comments, which ultimately threw Scott into panic mode and resulted in his cutting the film down considerably. Because a guy who was stoned had a big mouth.

Makeup effects master Rob Bottin has been in the business since the mid '70's. The man is responsible for some truly stellar makeup work such as John Carpenters The Thing, The Howling, Total Recall, and most importantly, designing Robocop's iconic suit. I'm sure I'm not alone in this, but my feelings are that easily the best thing about this film is Rob Bottin's stunning makeup job creating Darkness, arguably the best interpretation of the devil I've ever seen on film. Most of Bottin's work has been iconic to say the least, none more important than his work on Robocop and Darkness, but I have one question; Why is it that he hasn't worked on anything since 2002?

I don't hate it, but I don't love it either. It falls a few steps short of brilliant for a number of reasons, but remarkably, it's still entertaining because of it's audacious production and a clear indication of Ridley Scott's impeccable attention to detail and his brilliant eye. It's absolutely worth a purchase because for a mere $10-$15 you get 2 versions of the film, along with a great documentary and a healthy dose of other special features. It's pure eye candy, plain and simple. Nothing more.
Posted by robotGEEK at 11:58 AM