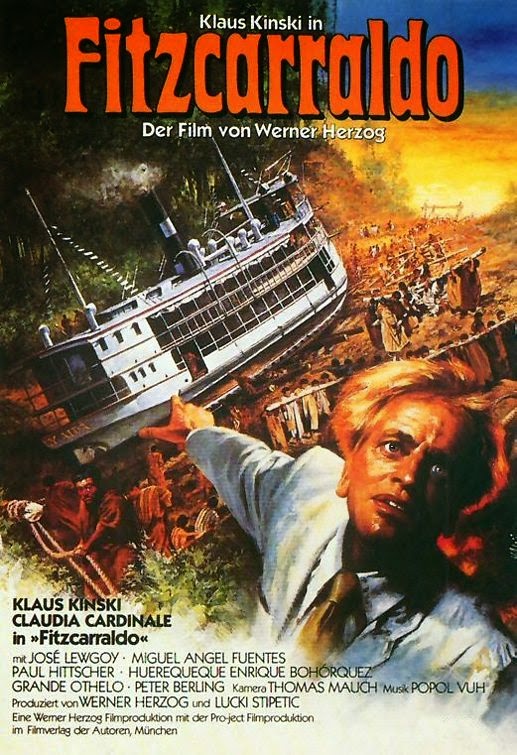 One of the things I've yet to do is immerse myself in Werner Herzog's filmography. While I have seen a very slight few of his films, I must admit that I have not seen a good majority of his work. In his vast catalog of films, Fitzcarraldo always seems to be at the top. When I recently watched William Friedkin's excellent Sorcerer for the first time, Fernando over at The Film Connoisseur suggested this film, saying that it was similar in tone and theme. After a few months I finally sat my ass down in what I knew would be a long Sunday afternoon essential Herzog viewing, and I was right.

I'm just going to come right out and say it. I didn't really care too much for this film. Gasp! Don't kill me! I can definitely understand the appeal; crazy story and even crazier star, but none of it really gelled with me. Performances aside, Herzog can certainly put a film together rather well, but judging solely on his work in this film alone, I wouldn't necessarily call him a stylish director. A few scenes indeed stand out, but I found the majority of his visual aesthetic to be humdrum at most. Often times I found myself commenting on how much he shoots things in close-up, where I really thought the scenes could have benefited in a wide shot. But that's just me. I've seen the pictures, the trailer and the promotional material and so naturally, my excitement is in wanting to get to the "scene". You know, the "moving the huge boat over the mountain" sequence. Unfortunately it takes nearly 2 hours for this sequence to come to fruition. In the meantime we are treated to drastically slow tale of a mans passion for the opera, his brash and unorthodox behavior, and his relentless pursuit of the seemingly unattainable. I know some love this film to death, and as I said before, I can certainly understand why for cinephiles. For me personally, I found it all rather dull and incredibly uninteresting. I could bet that a good 30 minutes at least could have easily been cut without losing any of the films integrity.

But I will admit that when the film does eventually reach that third act, it's an astonishing display of Grade A filmmaking at it's finest. This is where the film really shines, and considering all the logistics that go into pulling something like this off, it's mind-bogglingly awesome. With that being said, it wasn't nearly enough to save the experience for me. It's quite fascinating to see something this grande physically happening in an authentic way. If this film was made today, I can guarantee you that it would most likely be done using a healthy dose of CGI to do the things that Herzog and his production team were able to accomplish using practical ingenuity. On that end, it's a stunning accomplishment. But that's where my praise for this film ultimately ends.

I have yet to see Burden of Dreams, the full length documentary based on the harrowing ordeal of making this film and Herzog's tumultuous relationship with his often leading man Klaus Kinski, but I hear it's pretty good. I do own it and plan to watch it soon, and maybe it will help me appreciate this film a little more. For my personal tastes, I feel Sorcerer is a far superior film in almost every way. Different genre's altogether, yes, but both displaying a titular character set out to do the seemingly impossible against all odds. Until then.....
Posted by robotGEEK at 12:10 PM