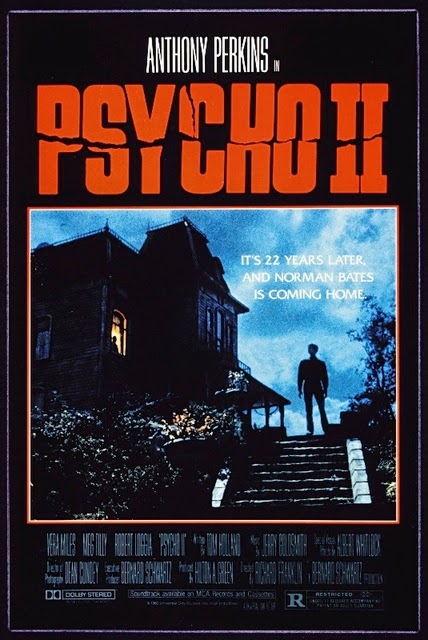 Psycho II and it's sequels is a franchise that I never put too much stock into. The original Psycho is on almost everyone's "Favorite Horror Films" list, but personally, I've never been a huge fan of it. Maybe it's because I was too young to appreciate the genius behind it when I initially saw it? Or maybe it's because when I did see it many, many, many years ago, I just didn't really care for it. Regardless, I've actually never seen any of them save for the original maybe once or twice.

But we've had a few films and other iterations of this franchise, most recently AMC's hit TV show Bates Motel, since Hitchcock's genre-defining film and it wasn't until some new re-releases thanks to Scream Factory.........again, that I've found some genuine interest in finally giving these other films a shot; chief among them, Richard Franklin's Psycho II.

Now, I don't dislike the series. It's just that I've never cared about them enough to give them a second thought. I think it might have to do with the simple fact that I like my horror "slasher style". While I suppose you could also classify the Psycho films in the same sub-genre, I tend to think of them more as thrillers. But as I get older, I find myself wanting to experience these films for the first time, finally, because my taste for films has changed dramatically in the last 2 years and also, I've heard Psycho II is actually pretty good.

As the beginning credits rolled, I see that one; it's written by none other than Tom Holland (Fright Night, Child's Play), and two; that i'ts directed by Richard Franklin, who's responsible for films like the original Ozploitation classic Patrick, Road Games, and a personal favorite of mine, Cloak & Dagger. Throw in a few amazing character actors that you would not expect to see in a Psycho film and well, you've got a recipe for a great film experience.

Psycho II picks up in real time, 22 years after the events of the first film and 23 years since Alfred Hitchcock made showering a scary thing with his original film, released in 1960. Norman Bates has been in a mental institute for that amount of time having been found guilty of murder by reason of insanity. 22 years have passed and the state feels Bates has made enough progress that no longer justifies being locked up. With the help of his psychiatrist, he's re-introduced to the world and takes a job at a diner while also trying to bring the Bates Motel back to life. Soon Norman starts receiving strange phone calls and other happenings that make him question if his mother is still alive.

You have to wonder why it took so long for a sequel to one of the most popular thrillers ever made took 23 years to get made? I'm honestly not sure if a script worthy enough ever came across Universal's desk, or if Anthony Perkins just wasn't interested in reprising the iconic role of Norman Bates. But yea, it took over 2 decades for a sequel to happen and while hesitant at first, Perkins decided to give it a go after the role had been offered to another actor, which just so happened to be Christopher Walken to name a few. Was it a wise choice, or should Perkins have laid to rest the character that made him so famous to begin with as originally planned?

My answer is a big fat YES, he chose wisely. Not being a fan of sequels generally, if they "had" to make one, our only hope is that they all come out as good as this one did. I'll even go a step further. Based on my memories of the original, I have to admit that I prefer this sequel over the first film. Gasp! It's true. There's just something about the entire production of this film that makes for a much more pleasurable viewing experience for me. I love how everything is drenched in an early 80's aesthetic, and how director Richard Franklin seems to randomly throw in some really odd visual and tonal choices that make you look at the person next to you in surprise. While playing it straight for the majority of the film's running time, a few dark comicly funny scenes take you by surprise.....in the best way possible. Franklin, a protege of Hitchcock, does the film justice giving it a rich consistent visual style that is only broken momentarily from time to time when he randomly inserts a "dutch" angle. I personally enjoy them, but I'm also aware that others do not.

It takes a lot of confidence to make a sequel to one of the most loved and respected horror films of all time, much the same way writer/director Peter Hyams did with 2010: The Year We make Contact, his sequel to Kubrick's brilliant 2001: A Space Odyssey. There are just some films that you never expect a sequel from, films that are considered "untouchable". Yet, Hollywood often does it anyway, tainting the impact of the original. Psycho II could have been one of those unnecessary sequels that only slightly touches on the brilliance of the first film and overall, leaves a bitter taste in your mouth. But I think what makes this film work so well is Tom Holland's script, which is quite clever. A different tone altogether compared to it's predecessor, but it works. And let's be honest, why bother with a sequel if all you're going to do is try to make a carbon copy of the original? It's admirable that they've gone a slightly different route with this one and while there are many factors that contribute to why Psycho II is so successful, personally I feel it all goes back to Tom Holland's clever script, filled with some unexpected twists, tension, dark humor, and even a surprise ending.

What pulls everything together though is without a doubt Perkins return to his most famous role. Here he plays Norman Bates almost like a ghost of his former self. He's a little off, and a little strange, but he's trying really hard to be good and not let the "crazy" out. But the funny thing is that while it's extremely enjoyable to watch him try and behave, what we really want is to watch him be bad. But, to the films credit, it sets that train in motion rather nicely as we see Norman slowly slip back into paranoia. And the way screenwriter Tom Holland has it set up, we're never really sure if certain things are actually happening or whether it's just all in Norman's head, which is a brilliant move, because it always keeps you guessing. Perkins nails the quirkiness and scariness of the character effortlessly as he's able to convey these emotions and get us to feel both sympathy and an uneasiness about him. Had he not taken the role, as he almost didn't, I don't think anyone else could have pulled it off as effectively and believably as Anthony Perkins.

My final verdict is that Psycho II was great, never once playing out the way I expected it to and left me constantly enthralled, guessing and entertained. Every once in a while all the right forces of nature, or rather Hollywood, come together at just the right time to produce something that works on every level, where every facet of the production is working at the top of their game, and Psycho II is a perfect example.
Posted by robotGEEK at 10:55 AM