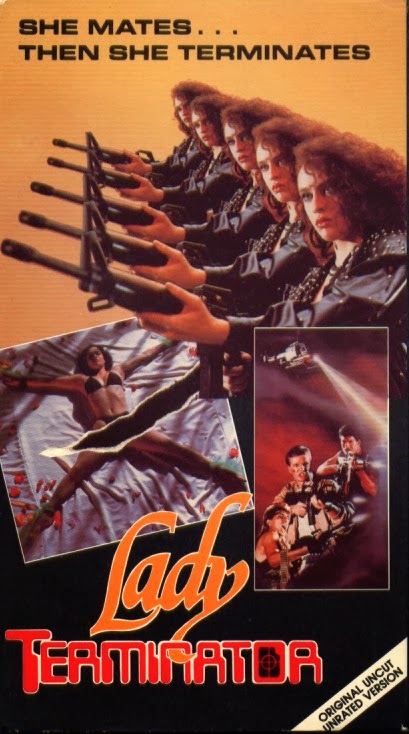 So here's a film I've been hearing about for a long, long time; Lady Terminator aka Nasty Hunter. A "Cult Film", apparently like no other cult film (so I've read), is a weird mish-mash of The Terminator and some Eastern folklore. Something about a curse being put on a woman, who's the descendant of a man who "wronged" an Asian Goddess. So this goddess possesses the body of this woman, an anthropologist, who generally kills her male victims by sleeping with them and the film plays out like a female version of The Terminator, for some odd reason. It was such a blatant rip off from one scene to the next that I eventually just started counting how many sequences they stole directly from the first Terminator film. And we've all read the stories about how model turned actress Barbara Anne Constable nearly died multiple times while making this movie since they don't really follow any normal safety rules.

I have to be honest, after everything I've read about this, I was expecting something a lot more fucked up than this. Lady Terminator has a huge reputation in the "Cult Film" community and until Mondo Macabro gave it a sassy release back in 2004, it wasn't an easy film to come by. So after reading about it repeatedly from time to time, and not being able to find it for under $20 anywhere, I was excited to finally get the chance to check this out and unfortunately, wasn't able to meet my high expectations for an Indonesian Exploitation flick.

The sex scenes, while there are many, are lame. You see her boobs an awful lot, but that's about it. It's really the Terminator rip offs where this things gets interesting. The action is constant, and ridiculous, with some truly awful acting thrown in and an 80's aesthetic that adds a little extra flavor to enhance your experience. We all know right off the bat going in that this is a "bad" films. And it most certainly is. However, it never reaches that level of "So Bad It's Good", so what we're left with is a mediocre bad film with a lot of boob shots of actress Barbara Anne Constable shooting a lot of guns and doing a lot of what Arnie did in the first Terminator. With much conviction I might add. But it never "wow's" you or blows you away like you hope it will. It seems, for me at least, the premise is much more what draws people in than the actual film. It just never pays off the way it should. Lots of action, lots of boob action, and plenty of bad acting, but ultimately a somewhat mediocre affair.
Posted by robotGEEK at 11:00 AM