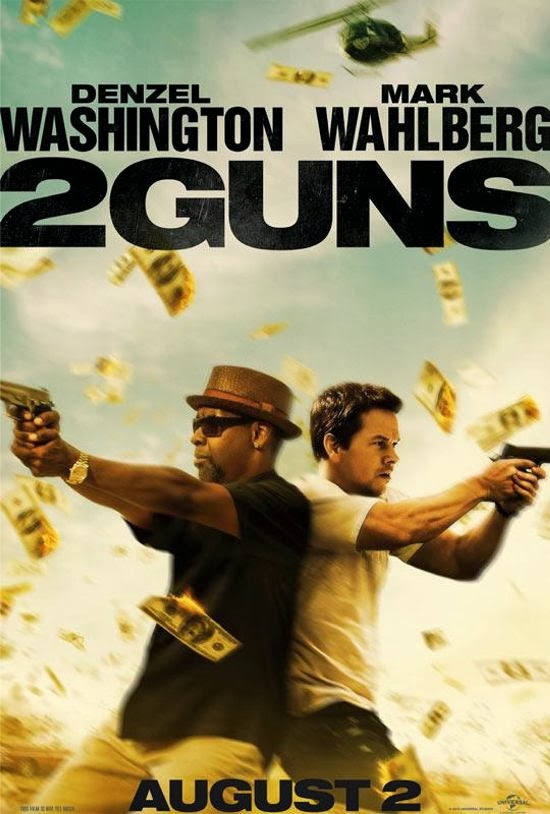 Just when I've about given up on the modern action film, a film like 2 Guns comes along and makes me re-evaluate my stance on modern action cinema. 2 Guns was fantastic. A straight up no-holds-barred homage to the action/buddy films of the 80's and 90's, only done exceedingly well. A few have tried this past decade, but rarely ever succeeding quite nearly as well as the way they pull it off here.

I'll be honest, when this hit theaters I didn't even give this one a second thought. It looked like a paint-by-numbers modern action film that didn't offer anything new to the table. With ticket prices being so damn high, I'm insanely selective of what I will fork out $10 to go see in a theater. What screenwriter Blake Masters and director Baltasar Kormakur have done is taken what made those action/buddy movies so damn great back in the day and threw in all the right elements for one helluva good time. Seriously, I can't remember the last time I had such a good time beginning to end watching an action film. And there's a lot of factors that make this happen. The sharp script by Masters based off of Steven Grant's graphic novel, Baltasar Kormakur's (Contraband) slick and tight camerawork; no shaky-cam, handheld or quick-edit crap here! Fuck yea! Old school style filmmaking at it's best only. Apparently, Baltasar Kormakur (from Iceland) is an all around actor/writer/director/producer, but only recently having dipped his hand in the action genre with Contraband and now 2 Guns, both starring Mark Wahlberg. The guy's a natural talent with material like this. It's enormously evident in every shot and sequence he shoots. I've never seen Contraband, but I plan to rectify that ASAP. I also hope he sticks to action. He's easily becoming one of my new favorite directors to keep an eye on and he clearly displays some natural talent for the genre.

2 Guns is a story about double crosses, drug dealers, and undercover cops. With some excellent performances from every single actor involved, it's really Denzel Washington and Mark Wahlberg's chemistry that really makes this work as well as it does. These two have a natural chemistry together. I mean, it shows in every scene stealing scene they're in together. In fact, let's hope some geniuses capitalize on this and find a few more projects they can work on together. Speaking of actors, Edward James Olmos show's up as a crime boss badass, as well as a sexy as hell Paula Patton, finally undressing in front of the cameras. Nice.

About as good a time as you're likely to have watching an action film with a couple of wise-cracking smart asses trying to outsmart each other. Better than the trailers lead you to believe and a breath of fresh air in the action genre. Check it out!
Posted by robotGEEK at 8:11 PM