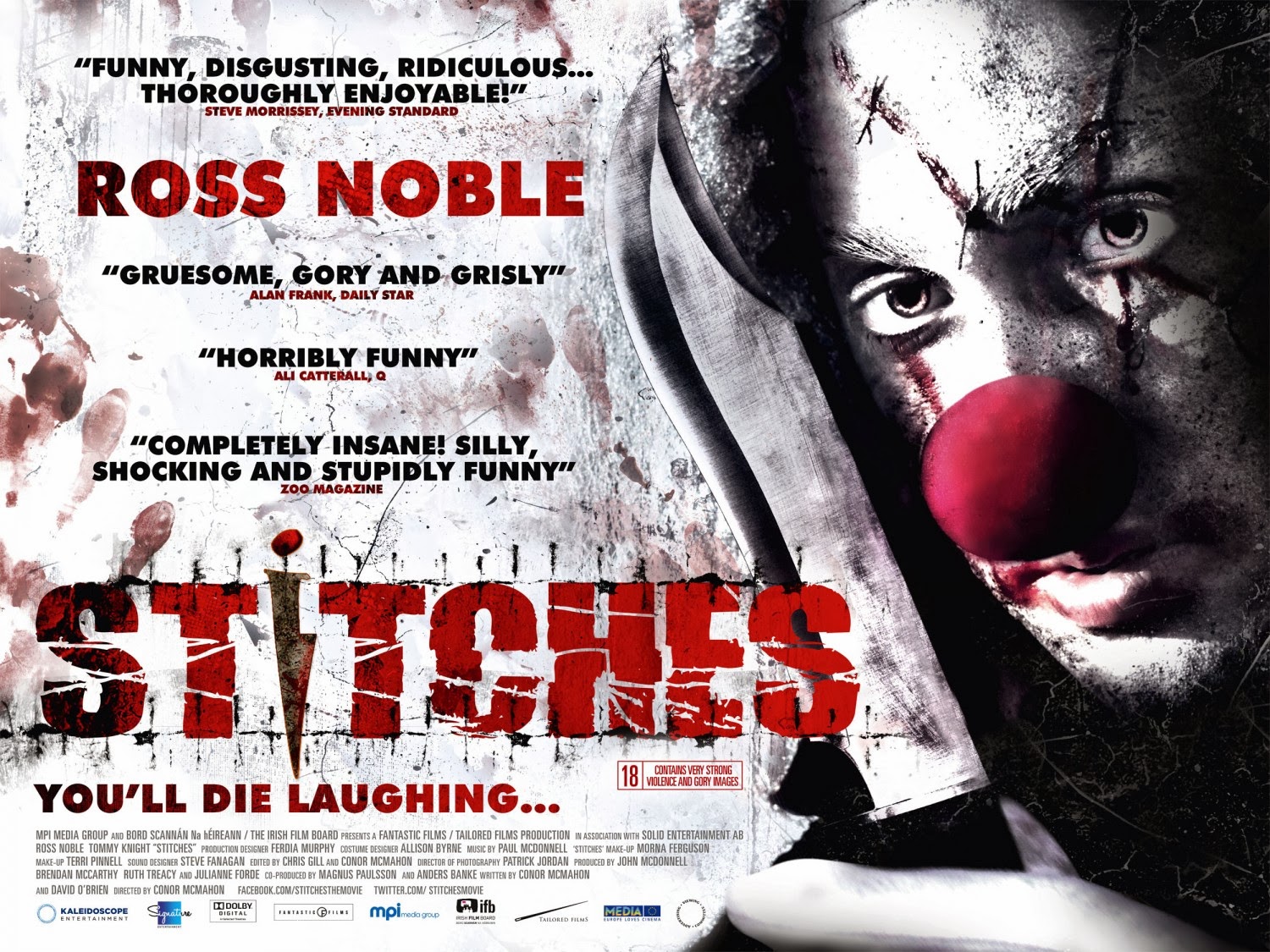 Being a horror fan, I follow a few horror film sites on a daily basis. And as with most movie news or review sites this past December, they started rolling out a lot of "Best Of" and "Worst Of" lists for 2013. One of them caught my eye because it was so random and didn't offer much in terms of what the film was about. But it was mentioned in one particular reviewer's "Best Of" list and so I tried to keep that in the back of my head if I ever came across it. Well guess what, I did recently at my local Blockbuster of all places.

Every so often, when you watch as many horror films as I do, and a good number of them turn out to be duds, one will pop up from time to time seemingly out of nowhere and surprise the hell out of you. For me, Stitches is that movie. I knew nothing about this; the story, where it came from, who starred in it, the specific genre it was supposed to try and tackle, nothing. And let's be completely honest here, the cover art is pretty lame. Now that I knew to look out for it, I realize that I probably passed this one by countless times thinking it was some low-budget ghetto horror film in the hood or something. At least, that's what it looked like to me. But holy shit, that couldn't be any further from the truth boys and girls.

Stitches was a total and complete surprise. First, that it was a horror/comedy, secondly, that it was actually funny when it was supposed to be, and thirdly, that it was made exceptionally well. It's a much higher budgeted film than I was led to believe by the cover and add to that writer/director Conor McMahon's impressive visuals and ability to handle both practical and limited CGI effects well and you have pretty much a slam dunk as far as ridiculous horror/comedies go. Let's get one thing clear. Stitches is completely absurd, but that's what makes it so great. It doesn't take itself seriously and if you know that it's at least partly funny and utterly ridiculous, then you'll enjoy the shit out of it.

Stitches the clown is accidentally killed during a kids birthday party. Apparently, he was part of a "cult" of clowns who do all kinds of worshiping and shit like that. According to them, the soul of a clown cannot rest if he died before finishing up an act, in this case, he died in the middle of one of his routines during a birthday party. 10 years later he emerges from his grave to seek vengeance on the same group of kids that basically tortured him during that fateful birthday party years earlier.

One of the great things about this premise is that these kids, who are responsible for Stitches death, have only grown up to become even more horrible than they were as kids. I mean, these teenagers are just the worst fucking human beings and so when Stitches rises from the grave to exact revenge, you kind of root for him because you want to see these fuck-tards die some gruesome deaths. And boy do they ever. One of the best things about this film are it's inventive kills and skillful use of practical effects. While you're  reveling in some good ol' effects work and the absurdity of some of the kills, you're also laughing. That's why this is so awesome.

Writer/director Conor McMahon clearly displays some genuine talent as a director and some love for the genre. My fears of a low-budget killer clown film looking like shit were quickly put to rest right in the beginning with some stylish camerawork. The guy knows what he's doing and I'm eager to see what he comes up with next.

How to see it:
You're in luck. Stitches is currently streaming on Netflix. So check it out while it's still available. But gather some friends, it's the best way to watch it. You can also pick up the DVD and Blu-ray for fairly cheap. They both come in widescreen with a "making of" documentary.
Posted by robotGEEK at 2:59 PM