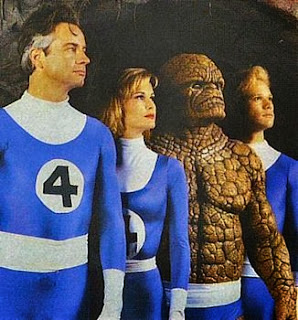 So, holy crap. I had no idea this was even being made let alone a full length documentary already set to be released! When I came across this yesterday I nearly shit myself. Needless to say, I'm floored and it's some of the best news I've heard all week.

So if you're a comic book geek and/or a film buff, then you already know this movie exists. If you don't, here's a quick rundown. Back in the 80's and 90's, Marvel wasn't the empire it is today. Back then they were selling there properties left and right to practically anybody. There were projects that never got off the ground, like the Spider-Man movie that was supposed to be directed by Captain America director Albert Pyun and also at one time, Joseph Zito, of Invasion USA and Friday the 13th: The Final Chapter fame. But they were able to get a few low-budget films off the ground like Captain America, The Punisher (Which is pretty fucking spectacular), and of course, 1994's The Fantastic Four, produced by schlock king Roger Corman. I knew of it's existence right from the beginning. I remember reading about it periodically in fan magazines and following it's progress. Rumor has it that it was so gawd awful that it was never officially released. And it wasn't available forever, until the internet came around. But even before that, you might have gotten lucky finding a copy of a copy of a copy on VHS at 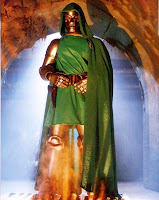 some convention. I actually own a shitty copy myself, but I have no clue where I got it from. It's a bad movie folks, let's just be clear. It sucks. Though, I will say that Dr. Doom looks 100% badass. If anything, they did a great job at creating his suit. Everything else, not so much.

What this documentary teases at is that maybe Roger Corman's Fantastic Four film was never actually meant to be released at all. Weird concept, but I have heard of weirder things. So you never know. In any case, I can't wait for this to come out. No official word on when this is set to be released, other than it's slated for 2014. You can pre-order the DVD/Blu-ray Combo as well as other merchandise directly related to this documentary as well as the legendary Fantastic Four film from their website at Doomedthemovie.com.

Posted by robotGEEK at 1:46 PM