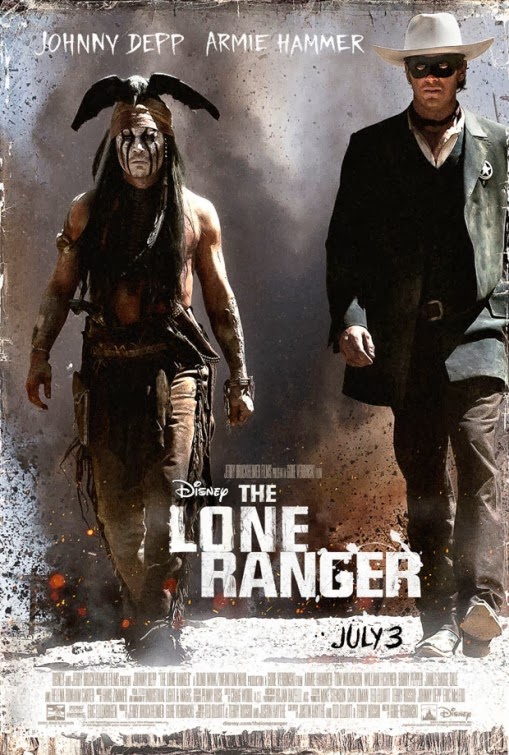 Just wanted to throw some quick thoughts on this and not waste too much time thinking about it. I'm in a lucky position in that I have a 10 year old, which affords me the opportunity to check out some more family friendly fare than I'm normally used to. If it wasn't for him, I probably wouldn't bother with some of these films but these days it gets harder and harder to find things that we can watch together that would be appropriate for a child. So here we go.

Far and wide, not the disaster I was expecting it to be. Critics can really blow things way out of proportion when they all ride the coat tails of other reviewers. I feel The Lone Ranger, while deeply flawed, is not the train wreck the media made it out to be. It's a little weird for sure, and definitely way too long for its own good, but the parts that work work exceptionally well and director Gore Verbinski offers up some stunning visual eye candy and some breathtaking sequences. While I'm doting out compliments, I might as well add that I felt Armie Hammer certainly did a fine job filling the shoes as the titular character, and even Johnny Depp, though I was hesitant at first to accept in the role of Tonto, handled the part very well. Sure we would have loved to have seen an actual Native American actor in the part, but an unknown is not going to fill the theater seats. But I guess even having a name like Johnny Depp didn't help things much in this case either.

Now on to the problems. It's just too damn long, and not in a good way. When the action set pieces hit and the comedy comes into play, it works and they hit all the right notes. But when the film delves into the mystical aspect, it slows down significantly and boy does it make things dull when it didn't need to be. And for some strange reason, instead of just telling the story straight forward, instead we are treated to an older Tonto who now works as part of a traveling roadshow who tells the story of The Lone Ranger to a boy and instead of being interesting, comes off as just plain odd, not to mention slows things down rather abruptly throughout the film. Not a wise creative choice in my humble opinion. Going back to the length though, it feels they could easily have shaved 30 minutes out of this thing without really affecting the story drastically. I'm serious, the film is that long and it's completely unnecessary.

When it's all said and done, I had fun watching it with my son. It's funny when it needs to be and the action sequences were impressive to say the least. The cinematography and the visuals are just gorgeous. But it's just too long and a bit odd in some places. I'll bet that someday a few years down the line, there'll be an appreciation for this film. Especially if they decide to give it a massive re-edit. But it's just not right now.
Posted by robotGEEK at 3:19 PM