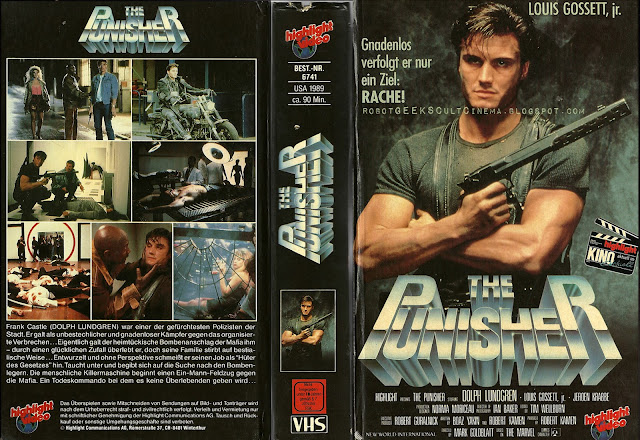 This here is a German Big Box VHS Clamshell, or as they call a Hardbox in Germany, of Dolph Lundgren's awesome The Punisher. I know, I've done many posts on this one particular film before here on my blog. First with a review of the theatrical cut and U.S. VHS release, which you can find here. Then of the awesome Workprint Edition that features a pretty impressive 16 minute prologue cut from the U.S. release that gives us a pretty in depth look at Frank Castle before he becomes The Punisher, which you can find here. Then I did another post on the badass U.K. Big Box VHS PAL format release. Such a badass cover if you ask me. You can check that badass cover out here.
So yea, I know I may have an unhealthy obsession with this awesome low-budget action-fest, but how can I not? It's quintessential Dolph Lundgren material and one of the best low-budget action films to come out of the 80's.
As with most of these German tapes that I'm able to get my hands on, I really couldn't have done it without my good buddy and fellow filmgeek Ingo over at Hellford 667 Movie Reviews. This guy has really helped me out in more ways than one and I couldn't thank him enough. This one is one of the jewels of my Big Box VHS Clamshell editions looking all badass on my shelf. Enjoy!
Posted by robotGEEK at 8:48 PM