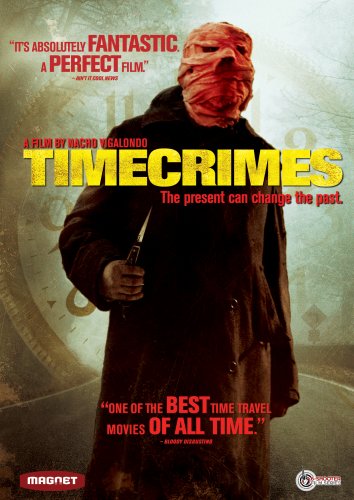 Nacho Vigalondo's brilliant time travel masterpiece Timecrimes is finally available on Netflix Instant and if you haven't yet had a chance to see this incredible little film, I strongly suggest you do so. And what better time than now since it's readily available via streaming on Netflix.
Trying to describe this film is nearly impossible without giving too much away because this film takes so many unexpected twists and turns that it'd be selfish of me to ruin them for you, which is also why I've never done a review on this because you simply can't without giving away too much. The least you know going in to this, the better. I can't even show you the trailer because whoever put that sucker together unfortunately included some extremely crucial spoilers that virtually ruin the entire experience for you if you watch the trailer before seeing the film, which you would obviously want to do before seeing the film, just to get an idea of what kind of film this is. But I strongly urge you "NOT" to watch the trailer if you intend to see this film. Trust me.
Timecrimes easily ranks as one of my absolute favorite time travel films ever made and everybody deserves a chance at seeing this film before it's unfortunately butchered before the inevitable Hollywood remake.
Posted by robotGEEK at 4:02 PM