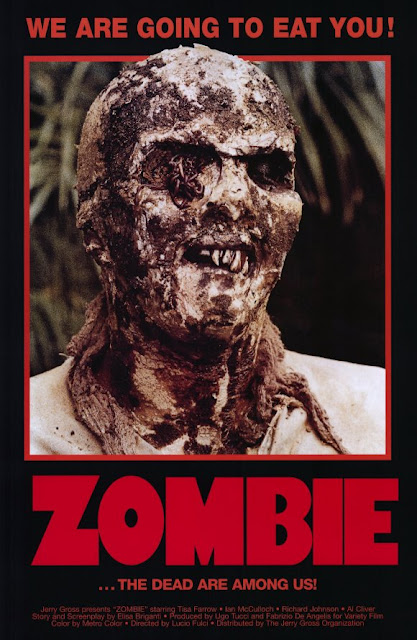 Zombie is a great film. Horror film, zombie film, Lucio Fulci film, whatever you want to call it. From beginning to end this film doesn't disappoint. Zombie keeps up a brisk pace, offers some pretty outstanding effects work and memorable camera work by Fulci. But for all the things Zombie has going for it, the one thing that stands out above all others and still astonishes me to this day is that shark sequence. And I just can't help thinking "How the fuck did they do that?!".

I actually hadn't seen this film in ages, and I think only once or twice, and after the lackluster Berlin Undead, I was needing a classic zombie fix with a tossup being between this and George Romero's Dawn of the Dead or Fulci's other zombie classic City of the Living Dead. But since I don't really remember much about this one since I'd only seen it maybe once, I thought it was a good choice to at least wet my appetite, even if it didn't end up being as badass as I remember.

Though a good 33 years have gone by since it's initial release, "nothing" has been lost in regards to it's entertainment value. It still holds up amazingly well today with Fulci seemingly at the top of his game, as well as having a better than average (for these kinds of films anyway) and amazingly fleshed out script. I should also mention that while Fulci's direction was pretty fantastic in this, as well as having some really top notch makeup and special effects, the score by Giorgio Cascio and Fabio Frizzi is what did it for me with this. I hope I don't sound too old when I say this, but for a flat out zombie gorefest, the score had a groovy vibe, reminiscent of Goblin.

One day an abandoned boat floats into the New York City harbor. When a police boat moves in to investigate it, they are attacked by a zombie hiding underneath. When reporter Peter West (Ian McCulloch) gets wind of the story, he does his own investigating and soon finds out that the boat belonged to a scientist who's gone missing. Teaming with a husband and wife who have a boat and act as a tour guide for them, West and the scientists daughter, who wants answers of her own, head out to Matul Island where her father was working hoping to find out what happened to her father and why and how his boat made it back to New York City abandoned. Once there, they meet up with Dr. Menard (Richard Johnson) and soon discover the island is becoming overrun with zombies brought on by an epidemic.


For a zombie film made 33 years ago, this thing is just plain awesome. Though I haven't gotten a chance to check out the new Blu-ray that was just released by Blue Underground, the extremely mediocre and bare bones 2002 Anchor Bay DVD release didn't diminish my enjoyment of this timeless horror gem. The aspect ratio seemed off and the blacks of the night sequences were annoyingly muted. But thankfully, most of the film takes place during daylight, so not as bad as it coulda been I suppose. On the plus side though, having a healthy amount of unnecessary nudity doesn't hurt either.

One of the more surprising elements I found was that, aside from the initial "zombie in the boat" sequence at the beginning and the "underwater zombie", there's really not a lot of zombie action going on until about a good halfway through the film, which is really surprising for a film titled Zombie. But regardless, Lucio Fulci and screenwriters Elisa Briganti and Dardano Sacchetti have fashioned together a thoroughly entertaining and "coherent" zombie film, not easily said in a lot of Lucio Fulci films. The fabulous and insanely confusing The Beyond immediately springs to mind.

Zombie has so many things going for it on a technical level in terms of effects, story, camera work and just the overall entertainment value. But it also possesses some pretty fantastic standout scenes like the "Zombie VS. Shark" sequence, the very first scene you see before the title even comes up, and the very last scene before the screen goes black, on top of the many found out throughout the film. That last scene though, as simple as it is, is so damn effective and almost bone chilling. Fulci seemed to working on all cylinders with this one and as a result, he's given us one of the best zombie films to come out of cinema wasteland in the last 30 years.
Posted by robotGEEK at 3:28 PM