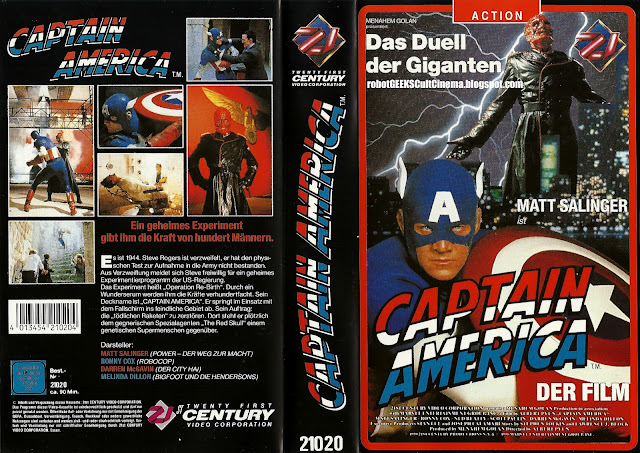 So yea, it's not a perfect film but Albert Pyun's take on Captain America still has a lot to like. The look for one. It's definitely got a classic Pyun look to it reminiscent of some of his best films like Nemesis and Cyborg, the type of films that don't venture into his "experimental" style which he seems to be doing a lot of these days.
And when there's action, what little of it there is, it's pretty damn spectacular even on this small scale. I can easily pick out a handful of scenes or sequences that hint at some Pyun "brilliance", and they all just so happen to be scenes where there's some form of action. Too bad there's just not enough of it in here. A lot went into getting this film made and bottom line is that it wasn't the Captain America film we all were waiting for or that the trailers had promised. BUT! If you know any kind of history about this film you know most of it was out of Pyun's hands. The guy was hired to direct a film, but it's all the stuff behind the scenes that we "don't" hear about that really made this film what it was. The biggest issue? They lost funding right smack in the middle of production. No funding = no money for effects, action or even sets.
And as the years go by, I find myself liking Matt Salinger's look and portrayal of Cap more and more. It's about as dead on authentic to the comic as it could possibly be and Salinger gives it his all. Pyun hinted in the Director's Cut that he intended to go more mainstream with this one and hit the melodrama, but I think we all really just wanted some Albert Pyun style action, and though this probably would have been the most perfect opportunity to do so, it just wasn't meant to be.
Posted by robotGEEK at 4:35 PM