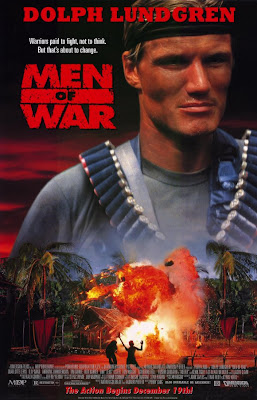 Men of War has 3 things going for it; Dolph Lundgren, a beautiful tropical location and a very impressive ensemble cast. Other than that you've got a very slow burn kinda film with only about 30 minutes of real combat action, which only comes at the very end. And that's a shame because with a film called Men of War, and an awesome ensemble cast like this I sure as hell was expecting a lot more.

It's not a bad film mind you, but very slow with only minor spouts of entertainment sporadically found throughout. To me it felt like it ended up playing out more like a drama more than anything, knowing full well that there is going to be a big showdown when you have so many mercenaries carrying heavy artillery, it just takes forever to get there.

Nick Gunar (Lundgren) is a former Special Ops soldier turned mercenary for hire who, with the help of his former Colonel (Kevin Tighe), is hired by the Nitro Mine Corporation to put together a band of his former soldiers and force a group of natives of a South China Island into signing over there rights to precious minerals only found on that island. When the locals refuse and the Nitro Mine Corporation enlist backup to deal with the situation, Gunar becomes jaded and becomes sympathetic to the native culture, falling in love with a woman there and taking up there cause. When some of his band of mercenaries don't agree with his new view, a line is drawn and Gunar is forced into a showdown with his former soldiers and defend the island and it's people.


This film seriously needed a lot more action than it had. And even when we get down to the big showdown at the end, it's not as impressive as you hope it to be. Some of the action scenes work, and some of them don't. On the plus side though, it's a beautifully shot film with stunning photography in gorgeous widescreen. The action, unfortunately, isn't handled as well visually, which wouldn't really be a problem if there was only more of it.

I really liked the cast here. Dolph always delivers, but you've also got Tiny Listen as one of his soldiers with a bad attitude, Kevin Tighe as his former Colonel, Trevor Goddard (Mortal Kombat) as his arch nemesis,  Charlotte Lewis as a native that Gunar falls in love with and an almost unrecognizable Catherine Bell as one of the soldiers, albeit as a tomboy. But I think the real standout here is B D Wong (Law & Order: SVU) as Po, as kind of an unofficial leader and spokesman for his tribe. The guy was hilarious as Po, always referring to Gunar as "boss" and talking with slang that hints that he might not be completely forthcoming with what he's telling Gunar. Wong seriously saves this thing from being a bore-fest with his performance in here.

All in all, not a bad film. It's a beautifully shot film to look at, but it just needed some more action to liven things up.
Posted by robotGEEK at 1:45 PM