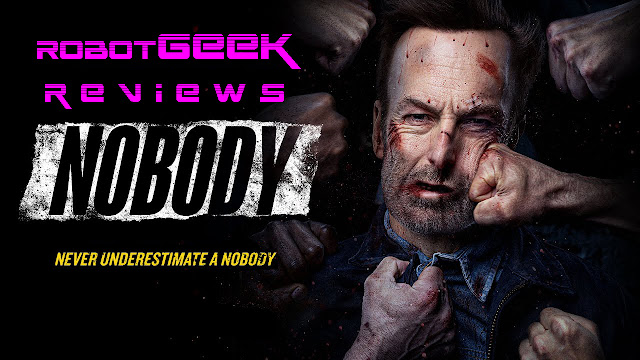 I know today is technically Tuesday, but I started working on this yesterday with every intent of posting it, but it has been a crazy couple of weeks for me. I just never seem to have the time to work on this site, or anything really. Or at least, I never seem to be able to finish anything I start. Aaaanyway...

If you had told me the best action film of the year would feature Bob Odenkirk, RZA and Christopher Lloyd kicking the living shit out of the Russian mafia, I wouldn't have believed you. But it's real, it's here, and it's fucking awesome.

I should mention that I went into this pretty cold, not knowing a thing about it, other than seeing the trailer and it looking like a John Wick clone. That's technically true, but I'll get into that in a bit. The selling point for me was seeing Odenkirk, who most will recognize from Mr. Show or Better Call Saul, but for me he's the skeezy lawyer from Breaking Bad (yes I know it's the same character in Better Call Saul). I thought the idea of him playing a badass was so fascinating, and boy does he deliver the goods. I also had no clue who was behind this. I mean, I kind of assumed it had somebody involved in the John Wick films because on the surface it's a fucking blue print for those films if I've ever seen one. So I wasn't at all surprised to learn it was written by Derek Kolstad, the writer of all three John Wick films. What did surprise me was that it was directed by Ilya Naishuller, who's only other directorial feature was Hardcore Henry, 6 years ago. But here he does such an incredible job making the film look as polished as any big budget theatrical release that you'd never know he's only had one other feature under his belt. He directs like a seasoned pro.

It would be hard for me to say anything about the storyline without giving too much away, because despite it looking pretty straightforward, it was definitely full of surprises that I didn't see coming. I guess I can say it's about a man who lives a pretty mundane life with a job, family, sexless marriage and all that, until one day he's pushed too far. That's a simple and understated approach, but really, there's so many layers that present themselves as the film moves along. It's far more complex than you think.

Odenkirk does a helluva job as the middle aged father, husband and committed worker who meanders through his existence without a single passion for anything. When he begins unleashing an unholy onslaught of ass-kicking to an insane amount of well-deserved thugs, he's equally as believable. He's no superhero though. He gets his ass kicked just as much as he dispenses it, but does it all so convincingly! He is a seriously understated badass in this film and I hope that he gets to explore this character some more with other films, or even lands other parts that show off his newly found ability to be a badass.

One of the things I absolutely loved about this film, other than the frequent surprises and even the refreshingly eclectic casting choices, was how the film looked. It's slick as hell, and you won't find any of that shaky-cam/quick-edit bullshit in here. It's all shot with so much style and some seriously creative camera tricks that literally throw you right into the action. I love it when a director takes his time to not only try to show you something new, but to actually show the action well so that you can actually tell what the fuck's going on. It's a bit refreshing these days. There is some clever editing, not only in the action sequences, but in the way the film is presented overall that makes it move along at a quick pace and never slows down for a minute. I loved that. 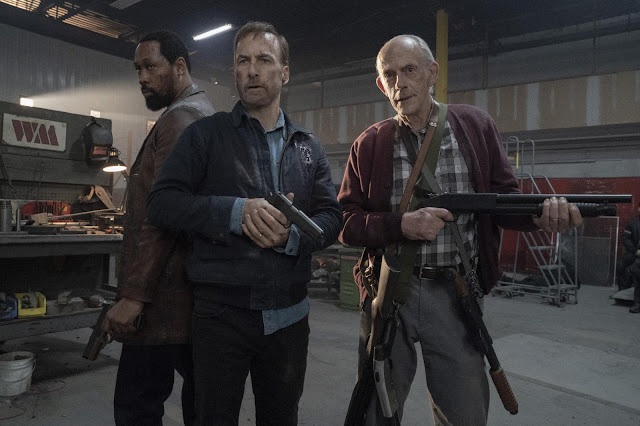 Ultimately, if you love the John Wick films, you're guaranteed to love this. There's no question. But there's enough of a difference between the two to walk away from this not feeling like it's "just another John Wick clone". Far from it. It's a breath of fresh air and if you haven't already seen it, you need to get on it ASAP.

Nobody is currently playing at your local theater, or you can rent it from a number of streaming services like Amazon, Vudu and Google Play.

Posted by robotGEEK at 6:20 PM